DOHA, Qatar, Dec 11 2012 (IPS) - Rich countries came to the U.N. climate talks in Doha intent on delaying needed action on climate change for another three years and a still to be hammered out new global treaty. 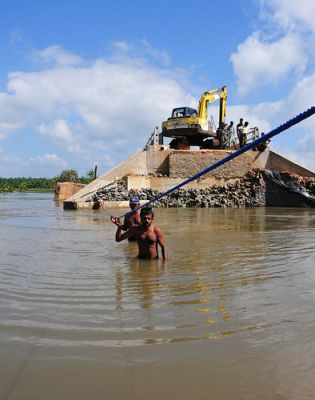 This delay will be extraordinarily expensive and risky.

Every year that fossil fuel emissions fail to decline adds to the cost and reduces the odds that a global temperature rise can be kept below two degrees C.

The 195 parties to the U.N. Framework Convention on Climate Change (UNFCCC) approved a set of documents called “The Doha Climate Gateway” that does not increase emission reductions or guarantee much-needed financial help to poor countries suffering present and future impacts of climate change.

“Doha is a betrayal of people living with impacts now. And it is a sellout of our children and grandchildren’s future,” said Naidoo.

“The fossil fuel industry won,” said Alden Meyer, the Union of Concerned Scientists’ director of strategy and policy, who has attended nearly every one of these climate negotiations over the past 18 years.

“The science is clear that four-fifths of known fossil fuel reserves must stay in the ground but we continue to burn them like there is no tomorrow,” Meyer said.

“Doha became more of a trade fair…Negotiators protected the interests of corporations and not the needs of people,” he told IPS.

More than 16,000 delegates participated in the two-week conference of the parties (COP) in Doha, Qatar, a country rich in oil and gas in the heart of the Middle East fossil fuel empire.

Meyer, along with representatives from more than 700 civil society organisations, blamed the U.S. for blocking proposals for greater emissions cuts. The U.S. also refused to commit a singly penny to assisting countries hard hit by climate change. U.S. negotiators did acknowledge poor countries were suffering costly damages and losses.

The world has already warmed 0.8 degrees C, altering weather patterns and increasing extreme events which have led to nearly 400,000 deaths and more than 1.2 trillion dollars being lost every year, according a 2011 study.

A delegate from Bangladesh told IPS that climate-related damages cost his country three to four percent of its annual GDP. Climate change, which is also driven by deforestation and land conversion for agriculture, is undercutting development and will push his country’s and other countries’ economies into a steady decline, he said.

But the U.S., Canada, Japan and others agreed only to more talks next year.

The only hope is to build a robust grassroots movement to force countries to act in the interest of the public and future generations, he said.

“We have to build a new social movement like (the one) that overcame slavery,” agreed Oxfam International climate change policy advisor Tim Gore.

“We reject what our leaders are doing here. We are more angry, more impassioned to defeat this process,” said Gore.

The COP process is an obstacle because a few big countries can easily block the will of the majority, said Mohamed Aslam, former environment minister and chief negotiator for the Republic of the Maldives.

“The signs of global warming are obvious and we know that the safe limit is to stay below 1.5 C…and yet we are failing to act,” Aslam said in a press conference.

The U.N. spends millions of dollars on these negotiations and they are going nowhere, he said. “We are running out of time. (We) need to take this to another fora,” he said.

What is lacking is a real commitment to reduce global emissions, said Christina Figueres, executive secretary of the United Nations Framework Convention on Climate Change (UNFCCC).

“What needs to change most is political will,” Figueres told IPS.

In Doha, the U.N. secretary-general announced a world leaders’ summit in 2014 to hammer out emission reduction targets to keep warming below two degrees C. The Doha Climate Gateway confirmed details for a new negotiation track to have a new global climate treaty ready for ratification in 2015 and go into force in 2020.

Under this agreement all countries will likely be obligated to make emission cuts, varying in depth and timing. Without additional cuts before 2020, reductions afterwards will need to be rapid and massive, moving to a zero-fossil fuel emission society in a few decades based on the science.

The Doha agreement includes a second phase of the Kyoto Protocol with the European Union, Australia and a few other countries agreeing to cut fossil fuel emissions between 2013 and 2020. However, they did not set new targets, agreeing instead to a mandatory review of targets in 2014.

The nations involved only represent 12 percent of global emissions, and do not include large developing country emitters like China, India and Brazil. The U.S. has never participated, while Canada and Japan have opted out of the second phase but are supposed to make to make comparable cuts but offered nothing new.

“Rich countries think they can protect themselves from the impacts, leaving the poor with no clear pathway to the future,” said Mohamed Adow of Christian Aid.

“Our leaders have let us down. Civil society will have to lead to get the future we really want,” said Adow.