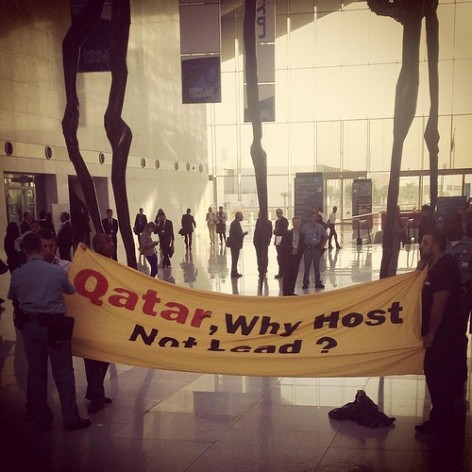 Two young Arab activists frustrated with Qatar's lack of public leadership at COP18 unfurl a banner in protest on Dec. 6 and are de-badged. Credit: adopt a negotiator/cc by 2.0

DOHA, Qatar, Dec 6 2012 (IPS) - United Nations climate talks are on the edge of collapse Thursday, according to a coalition of civil society and representatives from half of the world’s countries.

Once again, rich industrialised nations are putting nothing on the table in terms of increased emissions cuts and financial support for poor nations, said Celine Charveriat, director of advocacy and campaigns for Oxfam International.

“This is just like WTO (World Trade Organisation) negotiations where rich countries refuse everything until the very last minute,” Charveriat told IPS.

The atmosphere is tense and angry with less than 24 hours left before the summit known as COP18 concludes on Friday, she said.

“We need raised ambition from developed countries. If not, we will be extinct,” said Emmanuel Diamini, chair of the Africa Group of negotiators.

“Ambition” refers to increased reductions in emissions primarily from burning of fossil fuels. Even if major industrialised economies like the United States, Canada, Japan and the European Union achieve their currently promised cuts, temperatures will likely rise between four and 10 degrees C based on the latest science.

The vast majority of carbon emissions contributing to climate change are from developed nations.

“When we call for increased ambition, they (developed countries) say we are blocking progress,” Diamini said at a press conference.

If there is no increase in ambition in Doha, when will it happen? asked Yeb Sano, head of the Philiphines delegation.

“Hundreds of thousands of my people are homeless and in evacuation centres today after typhoon Bopha,” Sano said.

“We refuse to make this a way of life….We must not do just what our political masters tell us but what seven billion people need, ” he said. “Doha must be the place where we turned things around.”

Much of the acrimony is focused around the U.S. refusal to commit to anything new.

“The U.S. negotiating team should be replaced,” said Kumi Naidoo, head of Greenpeace International. They have spent four years blocking negotiations, according to Naidoo.

“People are dying because of climate change. People are losing their homes, their livelihoods, their source of food. It is saddening to see rich country negotiators actively blocking progress in order to maintain the profits of their coal, oil and forestry industries,” Naidoo said in a press conference.

The U.S. has put the most carbon emissions into the atmosphere and bears the biggest responsibility for acting to reduce emissions and providing financial help to poorer countries already being impacted, he said.

Greenpeace joined with ActionAid, Christian Aid, Friends of the Earth, Oxfam, WWF, and with African and many other nations to say that a Doha agreement must include scaled-up public climate finance from 2013, deep emissions cuts and a mechanism to address loss and damage from the impacts of climate change.

The political and public atmosphere around the financial crisis in Europe won’t allow us to go further, said Kristian Ruby, assistant to the EU chief negotiator.

The EU is proposing a mandatory review of emission cuts in 2014.

“U.N. Secretary-General Ban Ki-moon is convening a world leaders’ summit on this in 2014. And by then the IPCC (Intergovernmental Panel on Climate Change) will have released its latest scientific assessment,” Ruby told IPS.

There is progress, but not enough, he agreed, noting that China has been holding up that progress because it wants greater ambition from developed nations.

“One of the keys to success here is to get the U.S. to make some new financial commitment,” he said.

Poor nations say they need at least 60 billion dollars for 2013 to 2015 to help them cope. Those nations have seen the number of extreme weather events increase 600 percent over the past 30 years, according to insurance giant Munich Re.

Governments found trillions of dollars to bail out the financial sector. This is a far greater crisis, said Charveriat.

“Canada has become rich and prosperous from its huge fossil fuel industry. And here they are offering absolutely nothing to pay for their pollution of the atmosphere,” she said.

“What has gone wrong in Canada? They used to be a leader. Now they are one of the worst laggards, down at the bottom with the U.S.”