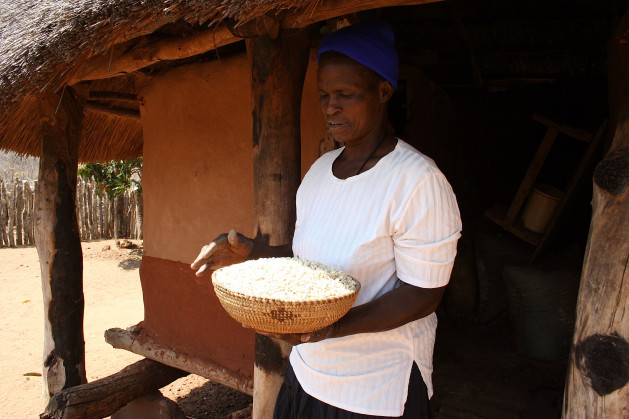 HWANGE, Zimbabwe, Jun 18 2013 (IPS) - For Catherine Dube, it is a good time to catch up on village happenings and sing-alongs when she meets with neighbours to dig basins in each other’s fields in preparation for the planting season.

The camaraderie of sharing the labour and sometimes seeds characterises the annual hoeing of neatly spaced deep basins, a technique Dube says has improved her crop yields since she adopted it four years ago.

Though the holes dug 15 cm deep by 15 cm wide look ordinary, they are not. Dube sprinkles fertiliser, using a soft drink bottle top as a measure. She throws three hybrid maize seeds into each basin, then covers it halfway with dry soil.

When the first rains fall, water collects in the basin, providing moisture for the plant for many weeks until the next rains come.

The practise of digging such basins is known as conservation agriculture — others call it “farming God’s way”.

The Zimbabwe station of the International Crops Research Institute for the Semi-Arid Tropics (ICRISAT) in Matopos, about 30 km south of Bulawayo, actively promotes conservation farming.

The technique is helping an estimated 300,000 Zimbabwean farmers like Dube feed their families and even have surplus grain to sell.

“Conservation agriculture has improved my crop production,” Dube tells TerraViva during a walk around her plot in Jambezi ward in Hwange District, 300 kms north of Bulawayo.

Adopted by thousands of farmers in Zimbabwe to boost yields and save their soils from erosion, conservation agriculture involves three main principles: planting crops with minimum disturbance of the soil; mulching with crop wastes, cover crops or other organic matter; and growing crops such as cereals and legumes in rotation.

The process entails zero ploughing and massive carting in of manure, and farmers say making the basins is hard work when the soil is dry.

Dr. Kizito Mazvimavi, a scientist with ICRISAT, says preparing planting basins using hand hoes before the onset of the rainy season allowed smallholder farmers without access to draft power to plant with the first rains.

“The basins also allow for precision application of the often limited fertiliser and harvesting of rain water early in the season,” Mazvimavi says.

ICRISAT has promoted conservation agriculture and micro-dosing techniques in semi-arid regions of the world, including Zimbabwe, with funding from the UK Department for International Development ‘s Protracted Relief Programme.

According to Mazvimavi, farmers adopting the technology have realised yield gains of 15 to 100 percent across different agro-ecological regions.

The U.N. Food and Agriculture Organisation (FAO) profiles conservation agriculture in a report titled “Partnering for Results”. It details 29 stories from member countries around the world, and was released at the 38th session of the FAO biennial conference in Rome this week.

“While only five percent of Zimbabwe’s maize-growing area is currently under conservation agriculture, those farmers who have adopted it have been able to harvest more from their small plots, averaging about two tonnes per hectare of maize, which is nearly triple what they produced under conventional agriculture,” the report says.

In its initial stages, conservation agriculture is more labour-intensive than conventional methods, so the FAO launched a programme of training and demonstration. It also introduced labour-saving mechanical planters to win over sceptical farmers.

“Once farmers pass the initial labour-intensive, start-up seasons, their conservation agriculture techniques cut down on waste of inputs and thus reduce their costs,” the report says.

But critics like researcher and agricultural ecologist Ian Scoones warn that conservation agriculture may not be appropriate for every area. For example, although 90 percent of Zimbabwe’s farmers are smallholders, some of the new resettlements involve farms averaging five to 10 ha, where such a labour-intensive technique would not be a good fit.

“In a new agrarian setting, there are some real technological challenges, but these will have to be met together with inputs from farmers and a much better sense of scale requirements and farmer needs and priorities,” he concludes.