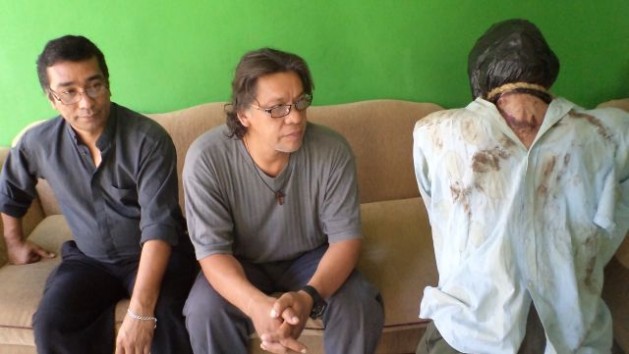 SAN SALVADOR, Jun 20 2013 (IPS) - The Salvadoran army kept a detailed list of names and photographs of leftists detained or sought during El Salvador’s 1980-1992 civil war. The report is the first official military document proving the armed forces’ direct involvement in forced disappearances and other abuses.

Activists told IPS that, besides serving as evidence of human rights crimes, the document confirms the links between the army and the death squads, since a number of the detainees on the list were later forcibly disappeared by the far-right paramilitaries.

The title on the cover of the list of 1,975 people described as “terrorist criminals” is “Yellow Book”. It was apparently written by the joint chiefs of staff of the armed forces, whose initials EMCFA – for Estado Mayor Conjunto de la Fuerza Armada – can be seen clearly printed on each of its 270 pages.

“The book proves that all of our denunciations were true – that the security forces and army were behind the forced disappearances, operating as death squads,” Guadalupe Mejía, the president of CODEFAM, an association of families of victims of human rights violations, told IPS.

The Yellow Book was found three years ago, hidden in a cranny in a house in San Salvador by someone who was moving house. IPS and the Mexican daily La Jornada have a copy of the report.

Carlos Santos, president of the Salvadoran Association of Torture Survivors (ASST), said the fact that some 250 victims of forced disappearance, whose cases were documented by the United Nations truth commission, are on the list confirms that at some point they were detained by the military or police.

“This provides new evidence that it was members of the army who seized the victims of forced disappearance. Everyone knew it was them, but the evidence (from the military) was lacking,” Santos told IPS.

The report, marked “confidential”, is dated July 1987. But it has names of people who were detained, killed or “disappeared” in the late 1970s and even earlier, which indicates that the date refers to the last time it was updated.

Death squads and the security forces are blamed for the majority of the 75,000 killings and 8,000 forced disappearances committed during the 12-year armed conflict, which ended when a peace agreement was signed by the Farabundo Martí National Liberation Front (FMLN) and the right-wing government of Alfredo Cristiani.

Many of the photos in the report were clearly taken in military or police installations, with the dishevelled and sometimes bruised detainees standing against a wall with an anguished look on their faces.

Other photos were apparently taken from the detainees’ identity documents, obtained by military intelligence from municipal civil registries. Yet others are surveillance photos taken by cameras with zoom.

Some of the people in the report were senior FMLN leaders, listed as “most wanted”. Others were leftwing intellectuals, trade unionists, rural community leaders and social activists, considered “subversives” during El Salvador’s civil war.

“The book is evidence that these people were captured by the security forces and then tortured,” Miguel Montenegro, director of the NGO Human Rights Commission of El Salvador, told IPS. “Files on them were compiled, and they were later ‘disappeared’ – in other words, killed.”

Santos said “after they were captured, their photos were taken to put in the file before they were killed; that means the document is clear evidence of the summary executions committed by the army, operating as death squads.”

One of the names in the Yellow Book is that of Abel Enrique Orellana, a 25-year-old medical student who is on CODEFAM’s list of victims of forced disappearance. He was seized on Aug. 18, 1981 by the National Guard.

Many other names are found in both the army report and on the lists kept by CODEFAM and other human rights groups, such as Ana Elizabeth Alvarado García, who disappeared in June 1982; Julio César Ávalos Hernández, in November 1982; and Felipe Oswaldo Ayala Portillo, in July 1983.

But some of the people on the list survived, like Cunegunda Peña, who is now 77 years old. She spent six months in a dark cell after she was seized Mar. 9, 1977 by members of the National Guard and the National Police – both of which were dissolved, along with the Treasury Police, under the 1992 peace deal because of their involvement in human rights abuses.

The agents, Peña told IPS, burst into her house that day in search of her three sons, who belonged to the Popular Liberation Forces, one of the five guerrilla groups making up the FMLN, which is now the governing political party of President Mauricio Funes.

“Since you’re sons aren’t here, we’ll take you,” the police told Peña. She was photographed after they took her to the National Police station, and her photo appears in the Yellow Book. She was released after six months.

“I heard screaming when I was in prison, as if they were dismembering people,” she said. One of her sons, Manuel Martínez Peña, has been missing since June 1980, and is presumed dead.

The activists who spoke to IPS complained that the amnesty signed in 1993, a year after the peace agreement was reached, protects human rights violators from being brought to justice.

Only courts in other countries have tried former Salvadoran military chiefs in connection with crimes against humanity.

Retired generals Eugenio Vides Casanova and José Guillermo García, who both served as defence ministers in the 1980s, were found guilty in 2002 by a U.S. court for the torture of three civilians by units under their command. The court ordered the two retired officers to pay 54.6 million dollars in damages to the civilians.

The current defence minister, General José Atilio Benítez, did not respond to multiple calls by IPS to ask whether the report could have come from any office under the Defence Ministry.