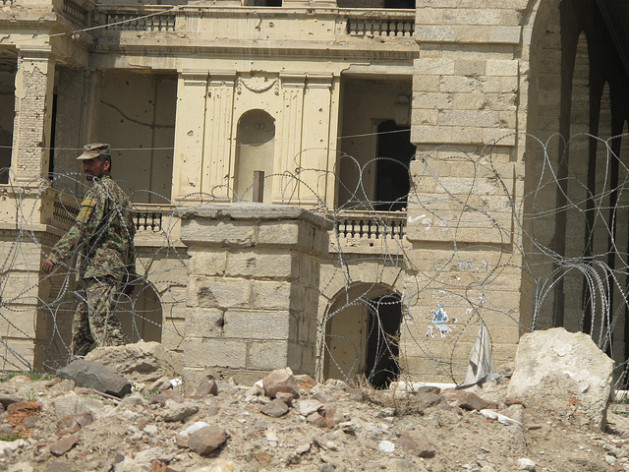 WASHINGTON, Jul 9 2013 (IPS) - The prospects for a peace settlement and power-sharing in Afghanistan following the scheduled U.S.-led troop withdrawal in 2014 are grim, according to a report presented here Monday.

Washington is currently debating how it will structure this withdrawal, including an option to remove all its soldiers sooner than expected.

In this context, a study group from the International Centre for the Study of Radicalisation and Political Violence (ICSR), a think tank here, has concluded that faulty diplomat efforts by the United States have failed to create the necessary circumstances for achieving a smooth political transition to an independent Afghan state.

The report details the findings of an extensive study on U.S. attempts to facilitate negotiations between the Taliban the Afghan national government. The ICSR analysts found that, thus far, those attempts have amounted to a “failure”; further, they express doubt that this failure can be reversed.

“Given the short time remaining before the end of the International Security Assistance Force combat mission in December 2014,” the report states, “there are few grounds for optimism that further talks might lead to a major political breakthrough.”

The difficulties involved in carrying out negotiations are many, both proponents and critics agree, and no talks are currently scheduled to take place.

The latest attempt to induce Afghan President Hamid Karzai’s government to talk to the Taliban failed last month because of objections Karzai had over a sign placed by the Taliban outside of the headquarters it has established in Doha, Qatar.

Nevertheless, the report accuses Washington of making a number of strategic errors that have compounded problems facing negotiations.

For instance, it attributes “bad timing” to U.S. efforts to conduct the talks, saying that they came too late, leaving the process too little time to bear fruit.

“The timing for talks could not have been worse,” Ryan Evans, one of the ICSR authors, said at Monday’s presentation of the report. “[The U.S. is] not negotiating from a position of strength but rather a position of weakness, because we announced we were withdrawing troops before we announced talks were a matter of U.S. policy.”

He added: “Doing so, we took away the biggest stick, the biggest leverage we had as far as the Taliban was concerned: our troop presence in Afghanistan.”

Frederic Grare, director of the South Asia programme at the Carnegie Endowment for International Peace, a think tank here, also doubts that there will be substantial negotiations involving Karzai’s government and the Taliban prior to the U.S. withdrawal, noting similar problems with timing.

“The Taliban do not want to deal with Karzai because they view him as a U.S. puppet,” Grare told IPS. “And the closer you get to the date of withdrawal, the less of a chance there is you’ll get the Taliban to do what they don’t want to do.”

Meanwhile, the report accuses the United States of lacking one coherent voice when speaking to Afghans, and providing mixed and often contradictory indications of its intentions.

It notes that members of a wide range of U.S. government agencies, such as the Defence Department, State Department and the National Security Council, are pursuing varied agendas.

“[T]here have been too many actors involved in this process and so many different lines of communication with the Taliban that the cumulative effect has been chaos,” the report states. “Multiple channels have been operating in parallel, creating confusion, disjointed expectations from all parties, and contradictory messages.”

Meanwhile, the Taliban is also not as unified as would be ideal for conducting effective talks. But the United States has done itself a disservice by failing to operate with this in mind, the report states.

“We’ve approached the Taliban as if it were this strictly controlled hierarchical movement, and that we can negotiate with some people at the top and the rest of the group will fall into line,” Evans said, noting that this is not the case.

“People there fight for very local reasons and are often only casually connected to the leadership of the Taliban.”

Evans cites his own experiences in the country, as well as examples from recent history in which deals struck with Taliban leadership not been held up by lower-ranking members.

The ICSR warns that in addition to having a disparate structure, the Taliban is prone to using negotiations as a tactical move in a grander strategy.

“There may indeed be pragmatic Taliban who favour negotiation toward some sort of power-sharing deal,” the report states, “but there are also those who view negotiations as a means to an end or as ‘a way to reduce military pressure enabling them to conserve their strength and consolidate their authority in the areas of Afghanistan they currently control’.”

This last is a quote from a 2012 report in Foreign Policy magazine.

Meanwhile, Grare laments that other important voices have been left out of the talks. He believes that by pushing away other non-Taliban groups, Karzai left himself “isolated”.

This failure to involve other actors is one of the reasons, Grare believes, that talks “will lead nowhere.”

Work from one script

Still, other experts assert that the U.S. has no good option other than to push for substantial negotiations ahead of the 2014 planned withdrawal.

“We can stay until 2014 or we can stay until 2024,” Bill Goodfellow, a founder of the Center for International Policy, another think tank here, told IPS. “Unless we’ve negotiated a political settlement, it won’t matter.”

Goodfellow emphasises the importance of including all states and parties concerned, including Iran, a country with which Washington is currently at odds.

The ICSR report does lay out a series of recommendations, however, which it suggests could improve U.S. chances of achieving a peaceful power-sharing agreement via negotiations.

It advises the United States to “speak with one voice”, for instance, by reining in the various U.S. government messengers in Afghanistan. By “working from the same script” U.S. could ensure Afghans understand its position and purpose.

The report also suggests the United States make sure all key stakeholders are involved in the process, and that the needs of the majority of Afghan society are taken into consideration.

“Ignoring those fundamental needs and interests,” the report concludes, “not only increases the risk of civil war, it also destabilises the negotiation process itself.”