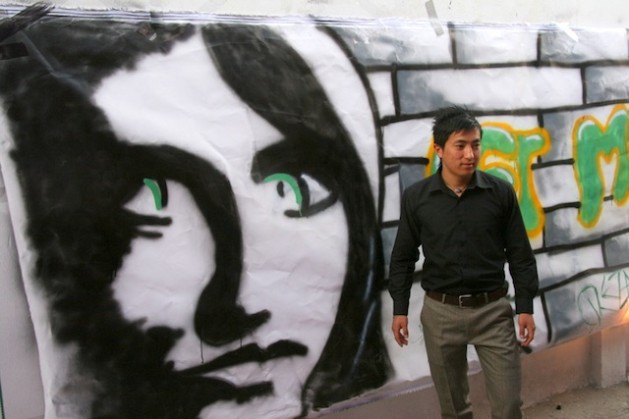 Young Afghan posing in front of one of the graffiti works of artist Reza Amiri. Credit: Giuliano Battiston/IPS

JALALABAD, Afghanistan, Jul 8 2013 (IPS) - While United States President Barack Obama and Afghan leader Hamid Karzai scramble to solidify a peace process ahead of the 2014 withdrawal of NATO troops from Afghanistan, fears that the Taliban will use the drawdown to seize power hang like a dark cloud over civil society.

Although NATO handed over the reins to the 352,000-strong Afghan security force on Jun. 18, signaling the end of 12 years of international military presence on Afghan soil that began with the 2001 U.S.-led invasion, unanswered questions mingle with smoke from militant attacks that show no sign of abating.

Even before the power transfer ceremony was complete, a car bomb exploded near the Afghan Independent Human Rights Commission (AIHRC) offices in western Kabul, killing three and wounding 20.

Unsurprisingly, the Taliban quickly claimed responsibility for the attack, which raised the ire of civilians and activists keeping a close eye on peace talks and the possible inclusion of Taliban representatives in a post-2014 government.

“The fact is that they want (total) power for themselves. And we cannot accept that.” -- Asadullah Larawi, regional officer for the Civil Society Development Center

The militants’ new head office in the Gulf emirate of Qatar seems to suggest that the group has already laid its plans for the soon-to-be independent country, placing itself in a central role as future negotiator and national representative. But the 35 million people who have lived for years under the Taliban’s boot might need some convincing.

In Jalalabad, capital of the eastern Nangarhar Province, which sits at the junction of the Kabul and Kunar rivers not far from the border with Pakistan, no one troubles to lower their voice when expressing scepticism about ongoing negotiations, or when criticising the lack of transparency surrounding future plans, none of which have been made public.

This city is hardened after years of war and still shocked by the May 29 attack on the local offices of the International Committee of the Red Cross (ICRC) that left one guard dead and three staff members injured, and served as a stark reminder that peace is a long way off.

Hambullah Arbab, artist and regional coordinator of the Youth in Action Association, told IPS that the peace process is failing as a result of incorrect assumptions and methods.

He said that conflicts in Afghanistan are traditionally settled through “jirga” and “shura” (local councils), the idea being that there is a need for neutral third parties to arbitrate any dispute between warring sides.

In the current peace process, however, this role has been assigned to the High Peace Council (HPC). It is a body that the Taliban sees as “illegitimate”, having been created by Karzai in 2010 and chaired by former Afghan President Burhanuddin Rabbani, leader of the Jamiat-e-Islami, a party that has a long and conflicted history with the Taliban.

Others fear that the armed group, accustomed to violence, coercion and terror tactics, will be unable to surrender itself to the democratic process or the will of the country’s 35 million people.

“Whoever honestly wants peace can be part of the government,” Ezatullah Zawab, founder and chief editor of the bi-monthly cultural magazine Meena, told IPS, adding that civil society is open to welcoming the Taliban on the condition that the militants stay true to their word of using peaceful means to achieve their goals.

Since late April, Karzai has extended numerous invitations to the Taliban leadership to participate in the upcoming presidential election that is scheduled for Apr. 15, 2014. This will test the waters of public opinion, and allow the Afghan people – not foreign forces or armed groups – to determine the country’s future.

Mohammed Anwar Sultani, a former professor at Nangarhar University and a respected elder in Jalalabad, believes that in the unlikely event that the Taliban fields candidates, few Afghans will be inclined to vote for them.

“The Taliban have already had their chance to rule the country, and they failed,” he said, referring to the period between 1996 and 2001 when, under the flag of the Islamic Emirate of Afghanistan, the Taliban exercised total control from their seat of power in the southern city of Kandahar, and in central Kabul.

Having risen to power amid clashes between warring mujahideen groups and waves of brutal rapes throughout the country, the majority Pashtun Taliban portrayed themselves as the saviours of the Afghan people and the guarantors of safety.

“We were convinced they were a bird bringing peace,” Sultani told IPS. It was not until Sultani, like scores of others, witnessed their brutal and coercive regime that he realised he had been misguided, and grew suspicious of the militants.

He is not alone; suspicion is widespread, as is confusion about exactly who and what constitutes the Taliban.

Jalalabad regional officer for the Civil Society Development Center (CSDC) Asadullah Larawi firmly believes that the country should reject “foreign elements”, referring to allegations that the Afghan Taliban is backed by, and takes its orders from, Pakistan’s intelligence service.

Still, he strongly endorses the idea of dialogue with the Afghan Taliban if they are willing to accept the achievements of the last decade, like “freedom of speech, freedom of the media, human rights and women’s rights.”

“The fact is that they want (total) power for themselves,” Larawi told IPS. “And we cannot accept that.”

The country’s constitution also offers some middle ground between continued militarism and total political control in the Taliban’s hands.

While the debate rages on in cities across Afghanistan, the U.S. should not consider itself out of the line of fire just yet.

“If the Americans really wanted peace, they would easily find a way to achieve it,” said Baz Mohammad Abid, a journalist at Radio Mashaal, the local branch of Radio Free Europe. “The fact is, they have different goals in mind – they want to maintain a long presence in Central Asia to stop Chinese economic and political growth.”

Tragically, while the Afghan war “is not our war, but a war of foreigners”, the consequences of an ineffective peace process has been paid almost entirely by Afghans, with a 24-percent rise in the number of civilians killed and injured in the first half of 2013 compared to the same time period in 2012, according to Ján Kubiš, the United Nations secretary-general’s special representative in Afghanistan.