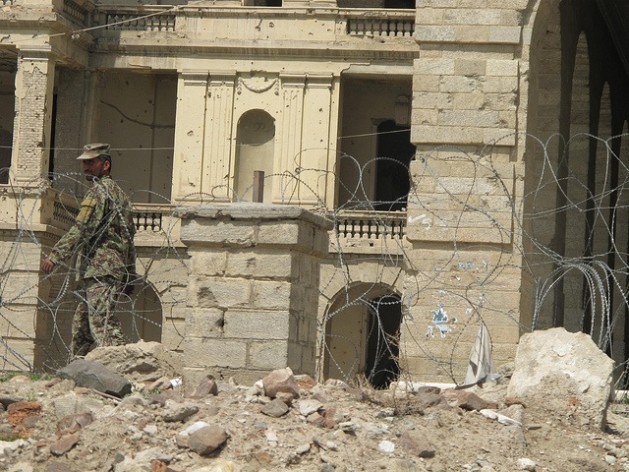 KABUL, May 16 2013 (IPS) - Western fears of a civil war in Afghanistan are growing ahead of the scheduled pullout of international troops in 2014. However, experts here say the situation on the ground is not comparable to either 1988, when the Soviets withdrew from the country, or the mujahideen’s rise to power in 1992, which plunged the country into civil war.

But locals who have been watching the situation closely do not share this bleak prognosis of the country’s future.

Retired Colonel Mohammad Sarwar Niazai, a military observer, says the situation is different to what it was in the early 1990s when the Soviets pulled out, leaving the communist government of Mohammed Najibullah without support and presenting seven jihadi parties, armed and aided by the United States, with the perfect opportunity to seize power.

This time around, “no one can get the government out forcibly,” Niazai told IPS, referring to the fact that the U.S. and its coalition partners in the International Security Assistance Force (ISAF) have promised to stand by Afghan President Hamid Karzai and his government for the foreseeable future.

Recently retired ISAF Commander General John Allen, speaking in Washington on Mar. 25, said the U.S. and its allies would retain a presence in Afghanistan big enough to bolster Afghan forces after the withdrawal of international combat troops at the end of 2014.

Still, Kabul Regional Chief of the Afghan Independent Human Rights Commission (AIHRC) Shamasullah Ahmadzai warned that the roughly 336,000-strong Afghan National Army, though highly motivated, is in serious need of the weapons and arms promised by western allies during talks about the pullout.

As international media reports of “impending” or “inevitable” conflict continue to proliferate, experts here contend that Western countries with a vested interest in maintaining their military presence have conjured the bogey of civil war to justify continued engagement.

“Their…goal is to create fear in Afghanistan,” Ghulam Jailani Zwak, head of the Afghan Analytical and Advisory Centre, told IPS, adding that he sees “no substance” in the predictions of chaos after 2014.

“Over the last 11 years, Afghanistan has built up a functioning civil society and a strong parliament that has shown it can stand up to the executive,” he said referring to the fact that at the end of 2012, 11 ministers were issued summons to appear in parliament or face impeachment for failing to spend 50 percent of their annual budgets in the last financial year.

Abdul Ghafoor Lewal, head of the Regional Studies Centre, believes threats of civil war are a deliberate Western ploy to maintain a military presence here, particularly in the Bagram airfield, one of the largest U.S. military bases in Afghanistan, located in the Parwan province.

Western powers would like Afghans to believe that foreign troops are their “best bet for security,” Lewal told IPS. The government must be “wise, prudent and…protect itself from the machinations of the West,” he added.

Meanwhile, Major General Rahmatullah Raufi, former commander of Paktia Army Corps and erstwhile governor of the southern province of Kandahar, dismisses the fears of war, claiming Afghans are more united now than they were 11 years ago.

A clear example of this was seen at the third ministerial conference of the Istanbul Process, held in Almaty, Kazakhstan’s largest city, on Apr. 26.

Originally intended to foster regional cooperation in the so-called ‘heart of Asia’ – primarily between Afghanistan and its neighbours – this year’s high-level gathering delved into a host of social issues, from education to disaster management, to help strengthen the war-torn country’s economic stability.

The independent Afghanistan Analysts Network said the Afghan government’s participation made clear that it saw the regional initiative as crucial to securing its future after 2014.

Moreover, according to experts like Member of Parliament (MP) Habibullah Kalakani – a former jihadi commander who fought against the Soviets – Afghan civil society is no longer “pliant” to foreign interests.

Independent media and human rights organisations including the AIHRC, whose president Sima Samar won the Alternative Nobel Prize last year, are widely respected and have earned international recognition for their efforts to build a culture of peace here.

Kalakani also pointed to the increasing number of educated young Afghans who are perfectly positioned to help their country make a democratic transition.

Girls now occupy 25 percent of the seats in public universities, a numbers that is increasing annually, while 52 new private universities have popped up around the country.

Defence Ministry Deputy Spokesperson Siamak Herawi agreed that 2014 will be a “year of change” but insisted there was good reason to believe “the change will be positive not negative,” he told Killid, adding that, this time around, “Afghan hands” will help to build the country.