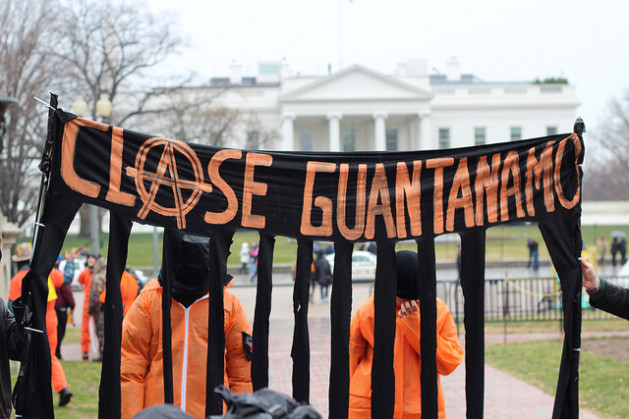 Poland has been identified as having hosted a secret CIA prison. Cuba is host to the notorious Guantanamo Bay. Pictured here are protestors during the 10-year anniversary of Guantanamo Bay detention center, in January 2012. Credit: Amnesty International/Christoph Koettl/CC By 2.0

WARSAW, Jul 21 2013 (IPS) - The only sign of life at Szymany’s “international airport” are mosquitoes eager to suck blood out of a rare visitor. The gate is locked with a rusted chain and a padlock.

Evidence suggest that some of the last passengers at this site were CIA officers and their prisoners. That was in 2003. Soon after, the airport about 180 km north of Warsaw inside the picturesque Mazury forests went out of service.

Bounded by the Freedom of Information Act, Polish Airspace authorities have revealed that at least 11 CIA aircrafts landed at Szymany, and some of their passengers stayed on in Poland. The European Organisation for the Safety of Air Navigation (Eurocontrol) was not informed about those flights.

From Szymany the prisoners were driven to a nearby intelligence academy in Stare Kiejkuty, where the CIA had a separated facility. In 2006, a few months after Poland was first identified as having hosted a secret CIA prison, Polish ombudsman Janusz Kochanowski visited the CIA villa – only to see that its chambers have been freshly renovated.

According to a U.S. intelligence source quoted by The New York Times, the prison in Poland was the most important of the CIA’s black sites, where terror suspects were subjected to interrogation techniques that would not be legal in the United States. The source claimed that Poland was picked mostly because “Polish intelligence officials were eager to cooperate.”

Two other European countries with known but unconfirmed black sites are Romania and Lithuania; the rest were in Asia and North Africa.

Human rights groups believe about eight terror suspects were held in Poland, including Khalid Sheikh Mohammed, the self-proclaimed mastermind of the 9/11 attacks. Two other men currently detained at the Guantanamo Bay detention facility have been granted “injured person” status in the ongoing investigation.

The first is Abd al-Rahim al-Nashiri, a Saudi national alleged to have organised the bombing of the USS Cole in 2000. He has claimed that he was often stripped naked, hooded, or shackled during seven months at Stare Kiejkuty, and subjected to mock execution with a gun and threats of sexual assault against his family members.

The second, a stateless Palestinian known as Abu Zubaydah, said he was subjected to extreme physical pain, psychological pressure and waterboarding – mock drowning.

Any Polish leaders who would have agreed to the U.S. programme would have been violating the constitution by giving a foreign power control over part of Polish territory, and allowing crimes to take place there.

Former prime minister Leszek Miller, now chairman of the opposition Democratic Left Alliance has been the prime target of criticism. There are demands he should face a special tribunal charged with trying state figures.

In March 2008, the Polish authorities opened a criminal investigation. “This indicates that Poland is a country with a rule of law,” Senator Jozef Pinior told IPS. “But the protraction is a reason for concern. The investigation has been moved to the third consecutive prosecutor’s office, in what looks like playing for time.”

Pinior, one of the leaders of the Solidarity opposition movement during the 1980s, and more recently a member of the European Parliament, has for long been lobbying for a full investigation into what the CIA was doing in Poland. Twice he was called in as witness in the investigation. He claims to have seen a document on a CIA prison with PM Miller’s signature.

"Poland is no banana republic, our security services do not do such things behind the back of the government.” -- Polish Senator Jozef Pinior

“The Polish government, especially Leszek Miller, must have had knowledge that such sites existed on Polish territory without any legal basis,” Pinior said. “They must have known about the torture too. Poland is no banana republic, our security services do not do such things behind the back of the government.”

It is still not clear how much knowledge the Polish leaders had about the black site in Stare Kiejkuty. Some have vehemently denied the prison’s existence, but some admit it between the lines, though denying responsibility.

“Of course, everything took place with my knowledge,” said former president Aleksander Kwasniewski in an interview with leading daily Gazeta Wyborcza.

“The President and the Prime Minister agreed to secret service co-operation with the Americans, because that is what was required by national interest…the decision to co-operate with the CIA carried a risk that Americans would use unacceptable methods. But if a CIA agent brutally treated a prisoner in a Marriott hotel in Warsaw, would you charge the directors of that hotel for the actions of that agent?”

For now Poland is the only country with investigation into the secret jails still open (Lithuania closed its case inconclusively). The officials blame delays on lack of cooperation on the U.S. government.

According to a public opinion poll by SW Research released in June, 82 percent Polish respondents said that the issue of CIA secret prisons should be clarified, and 78 percent that those responsible for human rights abuses and breach of constitution should be held liable.

“In the U.S. there is a stamp of approval that even though torture did happen, they are unwilling to go after the criminals. So Poland has tremendous responsibility to pursue the investigation and hold people accountable. It could be an inspiring example for the rest of the world,” Ramzi Kassem, attorney for some Guantanamo prisoners told IPS.

Otherwise, Kassem said, Poland will prove to be “a puppet regime willing to do the dirty work for the U.S. in much the same way that Jordan, Egypt and other dictatorships were doing at the time, imprisoning people and torturing them because the U.S. asked them to.”

Although no major political party in Poland wants the truth about Polish cooperation with the CIA to come out, Senator Pinior is “cautiously optimistic”.

“Any attempt to cover up would result in colossal shame,” he said. “I believe Polish democracy and institutions are too strong to be manipulated.”