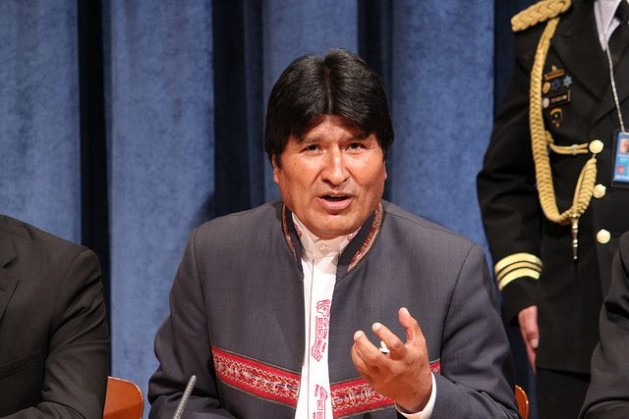 Four European countries – France, Italy, Spain and Portugal – denied Morales’ presidential jet permission to fly through their airspace on his way back from Moscow to La Paz.

Snowden, the former technical contractor for the National Security Agency (NSA) who released dozens of top secret documents proving that the U.S. government has been tapping global internet and phone systems on a massive scale, is in hiding in the Moscow airport.

Morales’ aircraft was rerouted and forced to land in Austria, where it was stuck on the tarmac for 14 hours. The governments implicated in the incident brandished technical explanations, and after hours of heated negotiations, the presidential jet was allowed to take off again.

While it was grounded, the plane and its passengers were apparently subjected to some kind of inspection, the scope of which is not yet clear. But afterwards, Austria’s foreign minister, Michael Spindelegger, stated that there were only Bolivian citizens in the aircraft.

The incident violates international law, because aircraft carrying national leaders have diplomatic immunity. Bolivian diplomats complained at the United Nations that Morales had been “kidnapped” during the time he was grounded in Austria. And the indignation spread to other South American governments.

An extraordinary meeting of the Union of South American Nations (UNASUR) has been convened for Thursday in the Bolivian city of Cochabamba to discuss the issue.
Morales, who along with other presidents from the region was in Russia for an oil and gas conference, had expressed sympathy for Snowden’s plight. The whistleblower has been desperately seeking asylum in different countries since his passport was revoked and he was charged with espionage. In the last few days Snowden has applied for asylum in 21 countries. But as of yet he hasn’t received a response from any government.

Washington has not tried to conceal its efforts to block any attempt to offer asylum to the 30-year-old former employee of defense contractor Booz Allen Hamilton.

But U.S. State Department spokesperson Jen Psaki largely evaded questions as to whether communications between the U.S. and the European countries which denied the airspace had led to the rerouting of Morales’ presidential jet. “Ask them,” she said.

She was only willing to acknowledge that U.S. officials had been in touch with “a broad range of countries” in recent days with regard to Snowden.

It is clear that some of those contacts bore fruit. After receiving a phone call from U.S. Vice President Joe Biden, Ecuadorean President Rafael Correa said that neither he nor officials in Quito had given authorisation for travel documents that the consul in London issued to Snowden.

The consul in question is in the Ecuadorean embassy in Britain, where Julian Assange, the founder of the WikiLeaks whistleblower website, has been living since June 2012. Assange was granted asylum by Ecuador in August 2012.

“While we still do not know what role the U.S. played (in rerouting the plane), it is hard to believe the U.S. did not exert pressure to ensure Snowden was not on the plane, as they apparently suspected,” Coletta Younger, senior fellow at the Washington Office on Latin America (WOLA), told IPS.

“It was a huge tactical blunder and a breach of diplomatic protocol (by whoever decided to deny the airspace). But it sent a strong message that whoever takes Snowden in will face serious repercussions from the U.S.,” she added.

“I think this could backfire. The Latin Americans are so outraged that it could facilitate the decision to take Snowden in,” Younger said.

Michael Shifter, president of the Washington-based Inter-American Dialogue think tank, said “It seems either the U.S. had something to do (with the decision to deny the airspace) or it was done out of a sense of solidarity with the U.S.

It is possible they made the decision alone based on a recognition of how serious this issue is to the U.S.”

Shifter said that normally such a drastic step would indicate a state of war. He described it as “An extreme overreaction…Whatever one thinks about Snowden or Morales, it seems like this was disrespectful of international law.”

He also said the incident “looks terrible in political terms.It was out of proportion. It reflects a patronising, paternalistic mindset that stronger countries can bully weaker ones.”

But he disagreed with Younger that it would facilitate a Latin American refuge for Snowden. “What this ultimately underscores is how seriously the U.S. regards this case,” he said.

“It may be tempting to take Snowden in in order to needle the U.S., but the consequences of that will have to be taken into consideration. The U.S., for all its weaknesses, is still the U.S.,” he said.