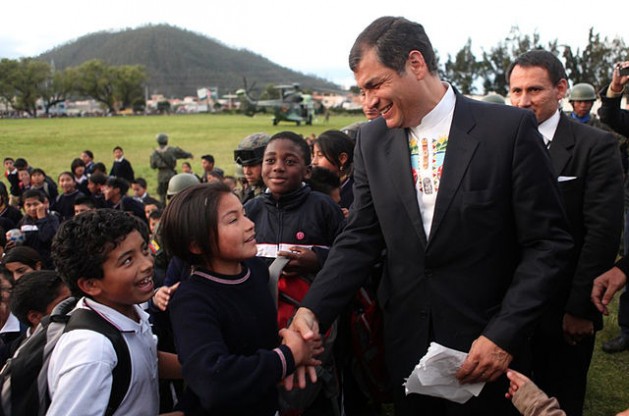 President Correa, seen here greeting people in Otavalo in 2011, has frequently clashed with the media, which is largely controlled by the opposition. Credit: Miguel Romero/Presidencia de Ecuador

QUITO, Jul 19 2013 (IPS) - Ecuador’s new media law introduces guarantees to democratise communications. But it has come under fire from critics who say it could set limits on investigative journalism. Many doubts will only be answered once its regulations are passed.

The Council for Regulation and Development of Information and Communication, in the process of being established, will be in charge of drawing up the regulations within 60 days of its creation.

The media law approved Jun. 14 and promulgated Jun. 25 also created a Superintendency of Information and Communication which will have powers of unknown scope to penalise noncompliance with the law.

Since the bill was drafted in 2009, important issues have been incorporated. For example, the law establishes the redistribution of radio frequencies in three equal parts: 33 percent private media, 33 percent public media, and 34 percent community media (to go into effect gradually).

It also requires that daily TV programming consist of 60 percent nationally produced content – and 10 percent must come from independent producers. In addition, 50 percent of the music played by radio stations must have been produced, composed or performed in Ecuador, and the stations must comply with the payment of royalties.

Furthermore, broadcast licence-holders will now be limited to one TV station and one FM and one AM radio station, in order to fight the concentration of media in a few hands.

And private advertisers must allocate at least 10 percent of their advertising budget to local or regional media outlets. This article is designed to ensure advertising income for smaller or rural print or broadcast media.

The law prohibits prior censorship as well.

But two matters were included at the last minute and voted in the legislature without previous debate: the prohibition of “media lynching” and the creation of the Superintendency, which is directly linked to the executive branch.

Article 26 prohibits what is described as “media lynching”, or the repetition by one or more media outlets of information aimed at destroying a person’s prestige or public credibility.

In such cases, the Superintendency could take administrative measures like requiring the publication of a public apology “in the outlet or outlets…in the same space, programmes, sections, as many times as the discrediting information was published.”

The Ecuadorean criminal code defines crimes against honour: defamatory slander and libel are described in articles 489 to 502, and may be punished with up to three years in prison if the allegations are made against a public authority.

But media lynching “leaves it to the subjective criteria of those judging whether or not there has been a bad faith action to persecute or harass a person on the part of the media,” said academic and sociologist Hernán Reyes.

In the view of journalist César Ricaurte, head of the Andean Foundation for the Observation and Study of the Media (Fundamedios), the concept of “media lynching” is “highly ambiguous” and “promotes censorship.”

“Press coverage that repeatedly mentions an official implicated in a corruption case could be denounced as ‘media lynching,’ which would bring about self-censorship of the media; they would stop investigating for fear of sanctions,” Ricaurte told IPS.

The law says that noncompliance with ethical regulations, including those on media lynching, may be denounced by any citizen or organisation to the Superintendency of Information and Communication which, once it has verified the complaint, will issue a written warning, unless the nature of the offence merits a sanction or administrative measure.

María Augusta Calle, a lawmaker for the governing Alianza PAIS coalition, said the fears were unfounded. “I think that in 99 percent of the cases, investigative reporting seeks to inform the public and comply with the duties shared by all journalists,” she said in public statements.

“But there is a difference between reporting the news and reporting on people’s private lives,” she added.

In a letter to Ecuadorean Foreign Minister Ricardo Patiño, the Inter-American Commission on Human Rights (IACHR) Special Rapporteur for Freedom of Expression Catalina Botero said that “any sustained denunciation of corruption that could lead to reduction of the public credibility of a particular official could be classified by the supervisory body as ‘media lynching’ and be subject to the corresponding sanctions.”

Under the new law, this offence does not require the reporter to be aware that the information may be false, or to have been guilty of “manifest negligence” in establishing its veracity, which contravenes the IACHR Declaration of Principles on Freedom of Expression, Botero added.

The reach of the article on “media lynching” will become clear once concrete circumstances are defined by the regulations.

Another concern is the Superintendency, whose head will be chosen by the Council of Citizen Participation and Social Control from three candidates nominated by leftwing Ecuadorean President Rafael Correa.

The mission of the Superintendency will be “oversight, audit, intervention and control,” according to article 55. It will have the capacity to impose penalties and its resolutions will be binding. Citizens, journalists and the media will have a voice, but not a vote, through a consultative council.

Another body created by the law, the Council of Regulation and Development of Information and Communication, is made up exclusively of representatives of the state, and is tasked with regulating classification of contents and time slots.

One of the first steps taken after the president signed the bill into law was the nomination of members of the Council.

Tamara Merizalde, the former head of the Institute for Children and the Family, will represent the Equality Councils – bodies responsible for ensuring the rights of vulnerable groups, which have not yet been formed.

Patricio Barriga, former under-secretary of political communications for the government, will be President Correa’s delegate. Paulina Mogrovejo was appointed to represent the ombudsman’s office.

Nominations are pending for delegates for the Council of Citizen Participation and Social Control and for the municipalities.

In Ricaurte’s view, the basic problem is not regulation per se, but the fact that it is directly in the hands of the government. “This mechanism goes against that of every democratic society, in which the main focus is the independence of regulators; here, control is handed to the executive branch,” he said.

But journalist Estefanía Montalvo, who is head of communication for the Environment Ministry, believes the law will have a positive effect, because it will force reporters “to check more sources, verify their facts and inform without personal biases.”

“This has been a constant problem in journalism: the value judgments that were always allowed,” Montalvo told IPS. “Now journalists will think twice about disseminating unconfirmed reports.”

In her opinion, “rather than be afraid, we just have to work at doing better journalism,” and the law “is an opportunity for this.”