One Way to See the Killing in Syria 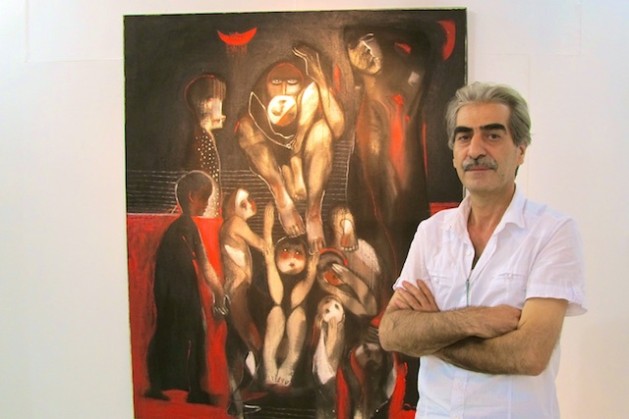 Zuhair Hassib with one of his paintings. Credit: Karlos Zurutuza/IPS

SULEYMANIA, Iraqi Kurdistan, Aug 29 2013 (IPS) - Zuhair Hassib did not witness the last and the most ghastly massacre in Syria. Images of last year’s Siege of Homs were enough for the artist to have seen. His paintings have brought those horrors home in a way pictures could never have.

On a canvas, black and red silhouettes surround a group of pale and naked children about to be massacred.

“Beauty is the best tool to convey suffering,” says Hassib, one of the most renowned painters in the Middle East.

A part of Hassib’s work has been on display since Jun. 20 at the main art gallery in downtown Suleymania, 260 kilometres northeast of Baghdad. It is a collection of 20 paintings among which women and “a symphony of eight pure colours” are seemingly the main threads.

"My art speaks of peace but the sad truth is that the entire region cannot wake up from such a deadly nightmare." -- artist Zuhair Hassib

But one of the art pieces does not follow suit.

“I ran to my studio when I saw the images of the terrible Siege of Homs [140 kilometres north of Damascus]. I could not stop crying for those poor children while I blotted the canvas in red,” recalls the artist, standing next to what is already one of his most emblematic works.

On May 25 last year, over a hundred people were killed in the mainly Sunni district of Houla north of Homs. United Nations investigators certified that while a small number of the bodies showed clear signs of having fallen to the shelling, most had been beheaded after being captured and handcuffed by militias loyal to Syrian president Bashar Assad.

Of the victims, 49 were children. Hassib hopes their memory will survive future generations.

“I am neither a journalist nor a documentary maker, so this is my way of vindicating the suffering of these innocent kids,” says the artist. Beauty, he says, “helps us to face human suffering and to digest it.”

Hassib cites a well-known precedent. “Picasso painted his ‘Guernica’ in plain black and white and you won’t spot a single plane on it. But his masterpiece will reflect accurately the horror of war for the coming centuries.”

In Syria, more than two years of civil war have claimed the lives of more than 100,000 people, according to figures provided in July by U.N. Secretary-General Ban Ki-moon. That was before this last massacre in which hundreds died of gas poisoning.

Hanging on a white wall, “Children of Houla” pays brutal witness to one of the most dramatic episodes of Syrian civil war. But the paintings around him work more widely as a vivid and colourful window to the author’s origins and life experience.

“I was born in 1960 in Hassakah, 600 kilometres northeast of Damascus, in a Kurdish peasant family,” says Hassib. “We didn’t own any land but when I was only two the government took away the little we had: our passports.”

After the 1963 coup, the Arab Socialist Ba’ath Party launched an aggressive campaign meant to assimilate the Syrian Kurds, the country’s largest minority numbering around four million.

Their native language and cultural manifestations of any kind were banned; their land was taken to relocate Arab families, and hundreds of thousands of Kurds were deprived of Syrian citizenship. This new “caste” among the pariahs were called maktoum – “nothing” in the Arabic language.

“In 1981 I moved to Damascus for higher studies. I was deeply impressed when I saw the city for the first time. My images until then were all linked to the rural world back home and distance only helped me idealise those even more,” recalls Hassib. He got his diploma in fine arts in 1985. But his career as artist was far from being smooth.

“I wanted to be an arts teacher but the regime did not allow me to continue my studies. How could I possibly do it if I wasn’t even able to book a hotel room without documents of any kind?

“(Former president) Hafez Assad, father of Bashar Assad, the current president of Syria, wanted us Kurds to be shoe cleaners or dishwashers. In fact, there are very few Kurds in Syria with higher studies.”

Hassib took refuge in art. His art began to be recognised both inside and outside Syria. As an artist, he says his life was “slightly better than that of most of the country’s Kurds.” But the war also came to knock on the door of his art gallery in Damascus old town.

“We got trapped between the government that systematically rejected us and those who want to kill in the name of god.”

Since the beginning of the uprising in March 2011, Syria’s Kurds vowed for a “third way” – neither with Assad nor with the insurgents. They took over the areas where they are concentrated in Syria’s northeast in July 2012 but have been constantly involved in clashes with both sides ever since.

Since mid-July, they are facing fierce episodes of violence in their region from groups linked to al-Qaeda allegedly funnelled into the area by Turkey.

“The Kurds of Syria as well as all those throughout the Middle East have spent the last 100 years fighting for their very survival. My art speaks of peace but the sad truth is that the entire region cannot wake up from such a deadly nightmare,” says Hassib.

He plans to travel back to Damascus soon.

Like most Syrians today, he can hardly tell what the outcome of the ongoing conflict will be. But he seems to have some thoughts for the longer term.

“Both Lenin and Stalin gathered immense power for decades but their memory is inevitably fading by the day. Tolstoy, Pushkin… those are the Russians everybody will always remember because there was art in them. They all struggled to convey human suffering; they found beauty in justice.”