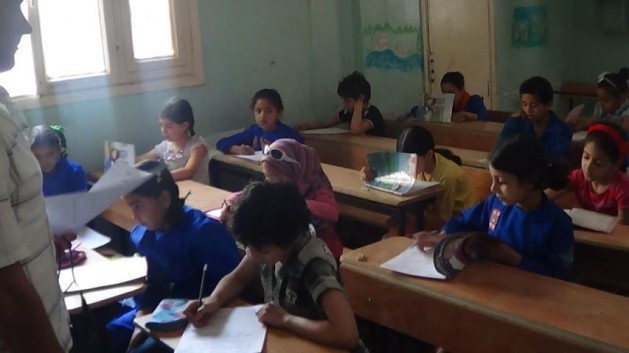 DAMASCUS, Aug 25 2013 (IPS) - The school system in Syria’s largest Palestinian refugee camp Yarmouk, located in capital Damascus, has been shattered by the fighting that now bedevils the community and the siege that strangles the district. Some tenacious teachers are, however, refusing to leave the camp and are battling against odds to provide education to an ever-growing number of youngsters.

Elements of the armed opposition took control of much of the camp in December 2012. This was followed heavy and indiscriminate shelling from government forces that continues to this day. A suffocating siege has been laid on the camp population.

When the battle struck into the heart of the camp in the closing weeks of 2012, and fighters from the rebel Free Syrian Army (FSA) and sympathetic Palestinian factions took root in the community, fighter jets from the government forces started to rain down destruction. The established education infrastructure quickly unraveled amidst the onslaught.

Teachers and education workers were among the thousands who fled the camp to more secure districts or to neighbouring countries such as Lebanon. This seriously disrupted the school system. The situation became worse after the United Nations Relief and Works Agency (UNRWA), the body that is responsible for primary and intermediate education for Palestinians in the Middle East, halted operations in the camp.

"They are just children who want a peaceful life, who want to avoid this ugly death that is everywhere in Syria now.”

The responsibility for secondary education to Palestinian communities lies with the Syrian ministry of education. But the only two secondary schools in the camp are precariously ensnared on the front lines, and were shut even before December 2012 as violence encroached on the borders of the camp.

Following the suggestion of Dr Khalil Khalil, an Arabic language teacher and lecturer at the University of Damascus, four teachers established an education programme at the Palestine mosque in the heart of the camp.

Initially 20 children came to the classes. But that number has steadily grown to around 200. This is encouraging for families, but has also put great strain on the teachers and the standard of education they can offer.

“It has become difficult for us to continue our work as before,” Dr Khalil told IPS. “We have needed to find places to educate these children but that is not easy at all in the camp at the moment. Then there are those essentials for education such as books and notepads and pens….But the most important thing is the security of the children and those that are volunteering to teach them.”

In the programme’s nascent stages the teachers were able to obtain resources through their own networks or through donations from some of the wealthier parents. But as the numbers of students grew, they sought UNRWA support.

“It became a case of securing more and more books and pens and electricity generators with fuel to run them on, as well as getting more teachers who we could provide a basic stipend, if not a wage,” Yehya Ishmaawi, one of the founding teachers told IPS. “It was no longer a case of providing some basic education support but trying to revive the complete education programme.”

With increased resources and more volunteers trained to support the teachers it became important to gain official recognition so that students could legitimately sit exams and progress within the education system. Once the teachers demonstrated the impressive gains they had made, UNRWA backed the programme.

“This is an unofficial route we are following but the most important thing is that we don’t allow the students’ education to be disrupted and we enable them to sit the exams on time, and under the supervision of UNRWA,” Jemaal Abd al-Ghani, the UNRWA official appointed to liaise with the teachers and volunteers running the programme in Yarmouk told IPS.

To overcome the siege and obtain the necessary education material, the teachers are tapping individuals and agencies bringing essential food supplies into the camp. Some of these partners have also paid for education resources, and paid stipends to the volunteering teachers.

The wider community and the parents have played a no less critical role. “If it hadn’t been for the faith of the families and their support for our mission to revive the education system it could not have happened,” said Dr Khalil. “They played a very big role in the beginning even in providing books or fuel from their homes for the generators that light the shelters.”

The teaching is not immune to indiscriminate aerial bombardment. On Apr. 1 this year a mortar strike landed next to the Palestine Mosque as a group of children were leaving a makeshift classroom next door. A number of children were wounded, and the blast proved an ominous harbinger for worse to come.

Within days another strike killed two students, Farhat Mubarak and Hesham Mahmoud, and seriously injured three others. “Why the craziness of this random strikes?” pleaded Farhat’s father. “There are no armed men here.  They are just children who want a peaceful life, who want to avoid this ugly death that is everywhere in Syria now.”

The savagery has so far claimed the lives of 149 Palestinian children in Syria, 56 of them in Yarmouk camp, according to the Palestinian Human Rights Association. The children of Yarmouk continue to search for hope and to rediscover the joy of their games that have been buried beneath flattened homes.