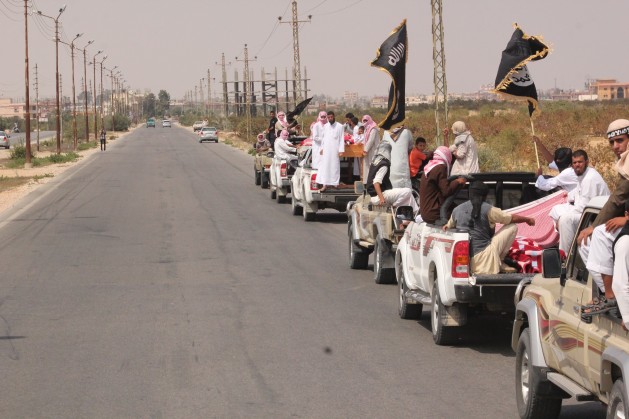 CAIRO, Aug 17 2013 (IPS) - The violence in Cairo came amidst firm indications that Muslim Brotherhood members hit back after a brutal crackdown this week that left many hundreds dead. And the winds of retaliation have blowing in from the Sinai peninsula, the desert to the east.

Sinai has witnessed daily attacks on police stations and security checkpoints since the overthrow of Morsi Jul. 3 in response. The attacks have come amidst mass protests demanding his release from detention and reinstatement as president.

The crackdown on Muslim Brotherhood supporters in Cairo, that left the world shocked over its extent and brutality, was certain to provoke reactions – such as those that Cairo saw at several places on Friday. What is emerging are both the militant and peaceful sides to Muslim Brotherood opposition to the military regime that overthrew Morsi.

"As long as the military coup stays, more blood and violence will continue."

The militant front has been rising in the east. Muslim Brotherhood leader Mohammed Al Beltagy made clear statements to suggest that violence in the Sinai would end only with the reinstatement of Morsi.

Ibrahim el Mini’ai, head of the Sinai tribes union said that military head General Abdel Fatah al-Sisi is ultimately responsible for attacks on the army and police in Sinai. “Al Sisi is responsible for what Egypt suffers now from such violence, after killing peaceful demonstrators just because they were supporting legitimacy,” he said.

El-Mini’ai said Islamists in Sinai were resorting to lethal attacks because the revolution has ended and the old Hosni Mubarak regime is gradually returning. “Jihadi militants are now ready for blood sacrifice in order to apply the Islamic Shari’a, even if they have to call for foreign powers, whatever they are.”

El-Mini’ai, who is known with his strong connections with armed groups in Sinai added that “as long as the military coup stays, more blood and violence will continue.”

The brutal policies of the present regime, he said, are eliminating moderate political parties. “Only the extremists will keep going.”

In Sinai, Jihadi salafists were evidently provoked after four members of the Ansar Beit al-Maqdes linked to al-Qaeda in Sinai were killed by the military Aug. 9.

According to Egyptian officials 31 people including 10 civilians and 21 policemen and army officers were killed in militant attacks in Sinai in July. In all 157 were reported injured.

Army spokesperson Colonel Ahmed Ali told IPS that the attacks in Sinai increased after the deposition of the previous president because the political regime under Morsi refused action against radical militias in Sinai. The Morsi regime also released many radical elements involved in terrorist attacks against the Egyptian state, he said.

“There is a direct relation between the Muslim Brotherhood and such terrorist groups in Sinai as per what Mohamed al-Beltagy said. The attacks on the army and police in Sinai will stop as soon as Morsi is reinstated as president.”

He added that there are an estimated 1,000 Jihadi militants in Sinai.

Ibrahim Suliman, a salafist who is a fugitive from the death penalty, told IPS: “We will not stop the violence in the Sinai before the crisis is resolved in Cairo between the Muslim Brotherhood and the military in a political manner. If the police continue to kill Morsi supporters, this will turn Sinai into a battleground. If the military commanders do not find a solution, the whole of Egypt will be in ruins.”

Ayman Moussa “Abu Talha”, a salafist jihadi militia leader told IPS that the army leaders and the current regime had turned unlawfully against a legitimate president, and that Morsi must be brought back to the power at any cost.

“The majority in Sinai would want to apply an Islamic caliphate state of governance and consider killing for the sake of this end as a jihad,” he told IPS.

Abu Talha said that the military alliance with Israel and the Palestinian Fatah is being used against the Muslim Brotherhood of Egypt and Hamas in Gaza.