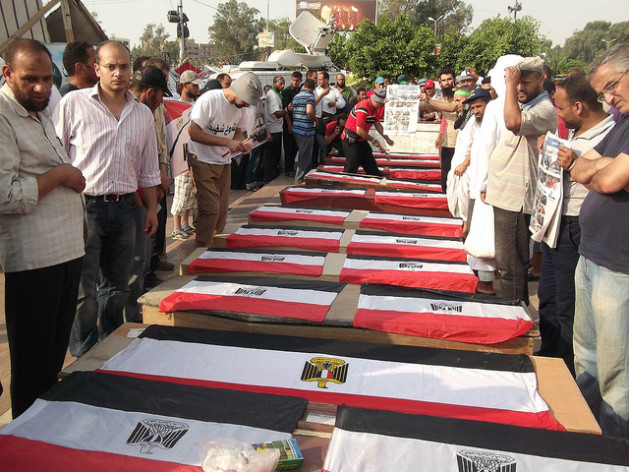 UNITED NATIONS, Sep 11 2013 (IPS) - The United States, which is preoccupied with the ongoing political and military developments in Syria, is still saddled with an unresolved problem elsewhere in the Middle East: the military takeover of Egypt’s first democratically-elected government.

A three-member U.S. Congressional delegation of Republicans from Iowa, Texas and Minnesota, visiting Cairo last week, pledged to defend the 1.3 billion dollars in U.S. military aid which was under threat following the army coup last month and the killing of over a thousand civilians.

"Egypt would have to reconstruct its military if it were to change major suppliers." -- Dr. Natalie J. Goldring of the Centre for Security Studies

According to published reports, the leader of the military takeover, General Abdul-Fattah el-Sisi, is contemplating a run for the presidency of Egypt, potentially legitimising the coup in a country described as one of the strongest U.S. allies in the Middle East, after Israel.

The administration of President Barack Obama, which has refused to cut off military aid to Egypt, has so far only meted out token punishment, suspending deliveries of two key weapons systems, namely F-16 fighter planes and Apache attack helicopters.

Taking its cue from the United States, Germany has also suspended arms supplies to Egypt, representing over 17.6 million dollars in contracts for the first half of 2013. The European Union has done likewise, with Britain revoking some of its arms export licenses, while Sweden has favoured freezing all aid to Egypt.

When Egypt signed the U.S.-brokered peace treaty with Israel in 1979, it was forced to switch political loyalties: from the then-Soviet Union to the United States.

And following that peace accord, Egypt abandoned its longstanding Treaty of Friendship and Cooperation with Moscow under which the Soviets supplied billions of dollars worth of weapons. These weapons included MiG-21 fighter planes and reconnaisance aircraft, Mi-8 helicopters, Antonov military transports, SA-6 and SA-7 anti-ship missiles and T-54 and T-62 battle tanks.

In a wide-ranging military modernisaton programme over the last 34 years, these weapons were gradually phased out and replaced largely with U.S. arms. But with the current strain in the political relationship with the United States, there is speculation the interim military government may be forced into the arms of the Russians – specifically for military needs.

Dr. Natalie J. Goldring, a senior fellow with the Centre for Security Studies in the Edmund A. Walsh School of Foreign Service at Georgetown University, is sceptical.

She told IPS the Russian government would presumably be delighted if Egypt turned to it for weapons purchases, particularly given the strains in the current U.S.-Russian relationship.

“But I don’t think Egypt is likely to undertake a wholesale restructuring of its military at this point,” she said.

While any weapons contracts with Russia might be seen as important political statements, Goldring said, such contracts are unlikely to be militarily significant.

Nicole Auger, a military analyst covering Middle East/Africa at Forecast International, a leader in defence market intelligence and industry forecasting, told IPS Soviet arms deliveries continued at a pretty fast pace for more than 10 years after the initial 1955 transaction between Egypt and the Soviet Union.

Then the unwillingness of the Soviet Union to supply greater quantities of arms severely strained Soviet-Egyptian relations.

Egypt’s current military modernisation programme is driven by the process of refurbishing or replacing its ageing Soviet weapons systems purchased before it turned to the United States, she said. Because Soviet-ware accounted for nearly 50 percent of Egypt’s previous inventory, the U.S. has been helping Egypt modernise its military inventory through the gradual substitution of U.S. equipment.

Egypt planned to have an all-Western military force structure by 2005, but this was delayed in implementation, so large amounts of Soviet-era military equipment remain in inventory, mainly aircraft and ordnance, said Auger.

Goldring told IPS the U.S. government and U.S. military contractors have built the modern Egyptian military over the last three decades, an effort that has been funded by U.S. taxpayers.

“Egypt would have to reconstruct its military if it were to change major suppliers,” she pointed out.

The Obama administration has strongly supported the new U.N. Arms Trade Treaty (ATT), and may well sign the treaty in the next few weeks. One of the core principles of that treaty is that countries should not transfer weapons when there is an overriding risk that the weapons will be used to commit human rights abuses, said Goldring.

The intent of the ATT is to prevent exactly the sorts of killings that are taking place in Egypt right now.

She said current and past Egyptian human rights abuses have been documented by Human Rights Watch and others.

“Given that such abuses are already taking place, cutting off U.S. military aid to Egypt is a no-brainer,” she said.

Regardless of whether the U.S. government declares that a coup has taken place, “We shouldn’t be supplying weapons to Egypt right now,” Goldring declared.

The bare minimum the U.S. government should do is to publicly declare that it is reassessing its policies and aid toward Egypt, while suspending all military aid, contracts, and deliveries, she argued. This would avoid the automatic cutoff conditions that will be imposed if the U.S. government declares that a coup has in fact taken place, she said.

“And if we are not willing to act when human rights abuses are so clearly documented, other leaders may assume that were simply unwilling to match our rhetoric with action,” she added.