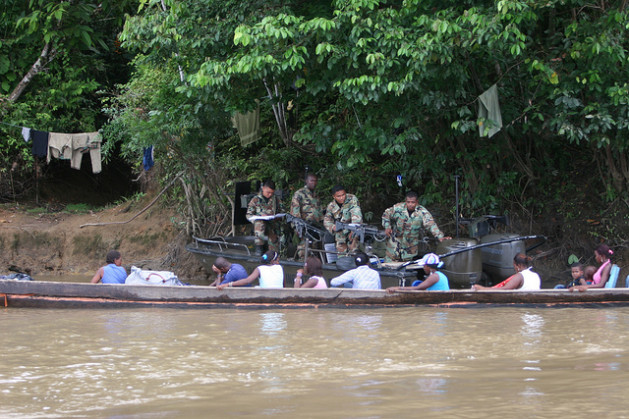 WASHINGTON, Sep 19 2013 (IPS) - The United States needs to phase down its drug war and tighten the reins on its cooperation with local militaries and police in Latin America, according to a new report released here Wednesday by three influential think tanks.

Of particular interest is the increase in training deployments to Latin American and the Caribbean by the Special Operations Forces (SOF) – elite units like the Army’s Green Berets and Navy SEALS – due in part to the U.S. withdrawal from Iraq and drawdown from Afghanistan.

Over the past decade, SOF ranks have more than doubled to about 65,000, and their commander, Adm. William McRaven, has been particularly aggressive in seeking new missions for his troops in new theatres, including Latin America and the Caribbean where they are training thousands of local counterparts.

“You can train a lot of people for the cost of one helicopter,” Adam Isacson, an analyst with the Washington Office on Latin America (WOLA), told IPS.

He noted that the increased investment in SOF was part of a much larger Pentagon strategy of maintaining a “light (military) footprint” in countries around the globe while bolstering its influence with local military institutions.

The Pentagon, however, is much less transparent than the State Department, and its programmes are often not subject to the same human-rights conditions and do not get the same degree of Congressional oversight.

Moreover, McRaven has sought the authority to deploy SOF teams to countries without consulting either U.S. ambassadors there or even the U.S. Southern Command (SOUTHCOM), making it even more difficult for civil society activists to track what they’re doing and whether they’re working with local units with poor human-rights records that would normally be denied U.S. aid and training under the so-called Leahy Law.

Last summer, according to Isacson, McRaven’s command even tried to work out an agreement with Colombia to set up a regional special operations coordination centre there without consulting SOUTHCOM or the embassy.

“What these developments mean is that the military role in foreign policy-making is becoming ever greater, and military-to-military relations come to matter more than diplomatic relations,” he said. “What does that mean for civil-military relations not only in the region, but also here at home?”

The 32-page report, entitled “Time to Listen”, describes U.S. policy as “on auto-pilot”, largely due to the powerful bureaucratic interests in the Pentagon and the Drug Enforcement Administration and their regional counterparts that have built up over decades.

“The counter-drug bureaucracies in the United States are remarkably resistant to change, unwilling to rethink and reassess strategies and goals,” said Lisa Haugaard, director of the Latin America Working Group Education Fund (LAWGEF) which released the report along with WOLA and the Centre for International Policy (CIP).

The report also noted that new security technologies, including drones, whose use by the U.S. and other countries is growing quickly throughout the region, and cyber-spying of the kind that prompted this week’s abrupt cancellation by Brazilian President Dilma Rousseff of her state visit here next month, pose major challenges to the security environment and civil liberties in the region.

Total U.S. aid to Latin America hit its highest level in more than two decades in 2010 – nearly 4.5 billion dollars – due to the costs of the “Merida Initiative”, a multi-year programme for fighting drug-trafficking in Mexico and Central America, and a major inflow of assistance to help Haiti recover from that year’s devastating earthquake.

But Isacson says dollar amounts can be deceptive, and while “big ticket” aid packages are down, “other, less transparent forms of military-to-military co-operation are on the rise,” in part due to the migration of many programmes’ management from the State Department, which has more stringent reporting and human rights conditions, to the Pentagon.

A troubling trend, according to the report, is that some countries, especially Colombia, have begun training military and police forces in their neighbours, often with U.S. funding and encouragement.

In that respect, these third-country trainers act as private contractors who are not subject to U.S. human-rights laws and whose cost is a fraction of that of their U.S. counterparts.

Despite their security forces’ own highly controversial human rights record, Colombian officers have been given major roles, for example, in Washington’s Central America Regional Security Initiative (CARSI) and the Merida Initiative, as well as in Honduras’ police reform, according to the report.

“Bringing the military into the streets can result in grave human-rights violations,” according to Haugaard who also noted U.S. involvement in poorly designed and heavy-handed counter-drug operations, such as one in Honduras last year in which four passengers in a river taxi were killed by a joint Honduran-DEA operation.

Washington’s record has not been all bad, according to the report, which praised the Obama administration’s insertion of human rights into its high-level bilateral dialogues with Mexico, Colombia, and Honduras and its emphasis on the importance of civilian trials for soldiers implicated in serious rights abuses in Colombia and Mexico.

The administration has also taken some steps to strengthen enforcement of the Leahy Law, which denies U.S. aid and training to foreign military units that are credibly accused of serious rights abuses, according to the report. It also praised Washington’s support for Colombia’s peace process and its defence of the Inter-American human rights system against recent attempts by Venezuela, Ecuador and Bolivia to weaken it.

Still, Washington’s own human rights record, including its failure to close the Guantanamo detention facility, its newly revealed extensive surveillance programmes, and a drone policy that justifies extra-judicial executions opens it to charges of double standard, the report noted.