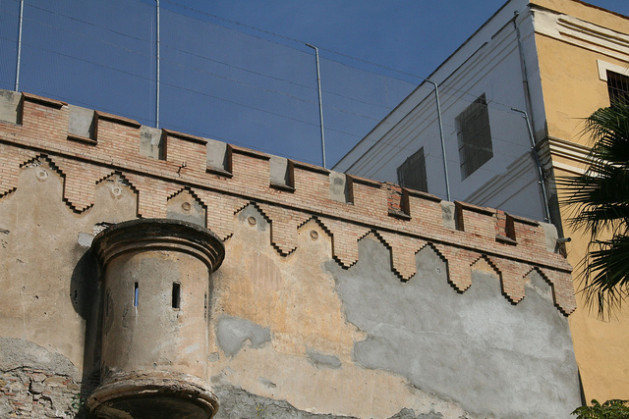 MALAGA, Spain, Oct 24 2013 (IPS) - “It’s just like a prison. One day in there is like 100 years,” says Jennifer, a 35-year-old Nigerian woman, describing what her aunt went through in the Immigrant Detention Centre (CIE) in this city in southern Spain before she was deported.

But perhaps it’s even worse than a prison.

In women’s prisons in Spain, the guards and other staff are female. But in the CIEs, female immigrants “are prisoners in jails supervised by men,” the president of the Platform for Solidarity with Immigrants in Málaga, Luis Pernía, told IPS.

That means conditions are ripe for abuse.

The second hearing in a trial against five Spanish police officers charged with sexually abusing female detainees in the Málaga CIE in 2006 will take place Oct. 30. At the time, the CIE was operating in a former military barracks, which was closed in June 2012 because of the ruinous state of the installations.

Tie clips were found on the shelves of the women who filed complaints that they were raped. “The cleaning women found condoms and bottles of alcohol. Police officers without shirts were caught on film embracing female detainees,” the lawyer handling the case, José Luis Rodríguez, told IPS.

These cases of alleged abuse, which have come to trial seven years later, were just “the tip of the iceberg,” said Rodríguez, an expert on immigration with Andalucía Acoge (Andalusia Welcomes), an NGO that works on behalf of immigrants.

There is “a sensation that these police enjoy absolute impunity, fuelled by the lack of transparency, regulations, and controls” in the CIEs, he said.

Four of the six women who reported the sexual abuse were deported the same year they spoke out. “What would have happened if the victims were Spanish women?” asked Hakima Soudami, a Moroccan woman who serves as an intercultural mediator for Accem, an organisation that provides assistance to immigrants and refugees.

Pernía said Spanish society has not yet heard or listened to the problems faced by immigrants in the CIEs. Fear plays a role in this. One woman who was held in the CIE in Málaga and later released was too frightened to tell her story to IPS.

According to Spanish immigration law, the CIEs are “public establishments of a non-penitentiary nature…for the detention and custody of foreigners subject to deportation orders.” Legally, immigrants can only be held there for a maximum of 60 days.

There are seven CIEs in Spain, with a capacity to hold 1,526 people, government sources told IPS. In 2012, 11,325 immigrants were taken into custody in the centres, and of that total, “4,390 were released that year,” the Interior Ministry informed parliament in a document dated Oct. 17.

Women in the CIEs “do not eat well, and get sick,” said Jennifer, who lives in Spain with her Spanish husband.

Women immigrants “are denied the basic right to healthcare within an institution of the state, which can even lead to death,” Paloma Soria, an activist, told IPS. She coordinated the report “Women in the CIEs; Realities behind bars”, published in 2012 by the NGO Women’s Link Worldwide.

Death was what Samba Martine, a 34-year-old Congolese woman, found in the Aluche CIE, in Madrid, on Dec. 19, 2011. Because the authorities did not have her health records, she did not receive the antiretroviral treatment she needed, and was not taken to hospital until the day she died.

The ensuing scandal “has not helped bring about measures to prevent a repeat of the tragedy,” says an Oct. 11 communiqué issued by the campaign to close down the CIEs – “CIEsNo” – which groups some 30 rights groups in the southern city of Valencia.

“In case of pregnancy, the women do not receive regular checkups, nor are they informed of their right to get an abortion,” which is legal on demand in the first trimester in Spain, Soria said. She described the denial of these rights as “appalling.”

In August 2006, a Brazilian woman with a high-risk pregnancy, who was a witness to the police abuse that had come to light a month earlier in the Málaga CIE, suffered a miscarriage while awaiting deportation.

Some female immigrants arrive in Spain as victims of human trafficking. But they are held in the CIEs and deported without being identified as victims, the president of Andalucía Acoge, Silvia Koniecki, told IPS.

“Effective oversight of these centres by non-governmental organisations is needed to overcome this serious problem of defencelessness,” she said.

Soudami had a hard time containing her emotions as she said “immigrant women suffer misfortune from the start. They are fleeing from war and from poverty.

“In some cases, their families have been killed, and they walk long distances with their [surviving] children. They come from Nigeria, Sierra Leone… it takes them years and they suffer mistreatment before they manage to pay for the trip in ‘pateras’ [the small wooden fishing boats used by traffickers to transport migrants into Spain] and end up in the CIE – if they survive the journey.”

Soudami has been living in Málaga for 15 years. Her work has brought her into contact with many women held in the CIE, and she says she is “disgusted” by the treatment they receive from the authorities.

Complaints about not enough, and poor-quality, food, a lack of information and outright misinformation, and a lack of interpreters for immigrants who don’t speak Spanish are some of the problems documented by the Women’s Link Worldwide report.

In several CIEs visited by members of the organisation, the women were given less time than the men outside in the patio, and their common areas were smaller than the men’s. In the Valencia CIE, they had to clean their rooms themselves, while there was a cleaning service for the men’s rooms, Soria said.

Last year, the government approved the draft of a decree to temporarily regulate the CIEs. But the text does not include “in-depth modifications,” according to Rodríguez.

Human rights groups are demanding, for example, that the CIEs be overseen by civilian guards rather than the police.

In 2010, an underage boy from Nigeria who was being held in the Málaga CIE, and who had a long history of abuse and mistreatment suffered until he made it to Spain, was deported despite the recommendations to the contrary made by several organisations.