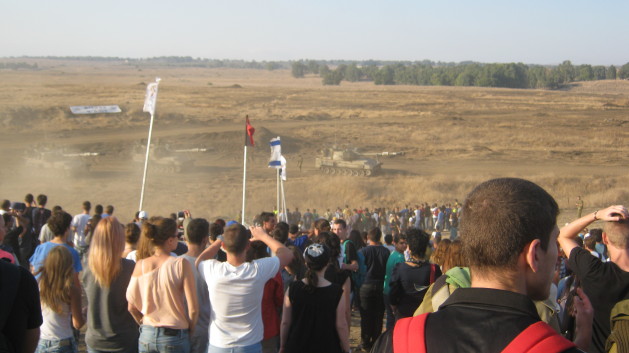 QATSRIN, Occupied Golan Heights, Nov 11 2013 (IPS) - In the municipal sports hall with an army officer to his side, Father Gabriel Nadaf, a Greek Orthodox Arab priest in full regalia, briefs Arab Christian twelfth-graders on the merits of serving in the Israel Defence Forces (IDF). “It’s only natural that the country which protects us deserves that we contribute to its defence,” he tells them.

A Christian teenager calls on the officer to reckon on the Christian conscripts’ cultural needs. The officer’s proclamation is unassuming: “The IDF is a melting pot.”

One in five Israelis is an Arab of Palestinian descent. Muslims constitute the overwhelming majority of this sizeable minority.

The 130,000-strong Arab Christian community is a tiny minority within the minority. They’re the original Christians of the Holy Land, the living stones on which the bi-millennial faith was built.

“Jews call us ‘Arabs’. For Muslims, we’re ‘Christians,’ not Arabs. We’re Israeli Christians, nothing short of that.”

Encouraged by Nadaf to take advantage of Sunday rest, some 250 youth have preferred to show up at an event organised by the IDF Social Branch than to attend mass.

Entitled ‘In the fighters’ footsteps’, the week-long event brings twelfth-graders from around the country to the nearby Ahmadiyah training ground where, in order to boost their motivation before conscription, military prowess is demonstrated in front of them with the pyrotechnics of live ammunition exercises.

“Deep in the heart a Jewish soul…” the lyrics of the HaTiqva national anthem might have sounded awkwardly discordant to Arab Christians’ ears, yet these boy and girls throw in their lot wholeheartedly in this country.

Anan Nitanes is determined to join those who must join the army. “Israel gives me a lot. So I must give her back,” he tells IPS.

Father Nadaf’s endeavour is beginning to bear fruit – according to the IDF, some 100 Arab Christians are currently serving in the army, up from 35 in 2012, whilst an additional 500 are performing civil service, up from 200 during the same period.

Last year, as he was officiating in the Church of the Annunciation, Nadaf was called up by Bishara Shlayan, a boat captain who resides in Nazareth – Israel’s largest Arab city once dominated by Christian churches, now two-third Muslim.

Shlayan required the priest’s religious imprimatur to his local Forum for the Enlistment of Christian Youth.

Originated in his difficulty to get his son Amir into the army, the initiative exposes conflicting identity dilemmas.

“Jews call us ‘Arabs’. For Muslims, we’re ‘Christians,’ not Arabs. We’re Israeli Christians, nothing short of that,” Shlayan tells IPS.

“We’re Palestinian Christians, an integral part of the Palestinian people,” retorts Azmi Hakim, chairman of the Greek Orthodox community in this Galilee town. “No schizophrenia here.”

Shlayan’s project has also thrown Israel’s Arab Christians into the national “one people, one draft” debate over sharing the national burden more equitably.

Israel is a Jewish state in the sense that its defence is above all the duty of its six million Jewish citizens. Military service is compulsory for 18-year-olds – or should be.

In effect, some 40 percent potential draftees – mostly ultra-orthodox Jews, roughly 12 percent of age-draft youth – are traditionally exempt from it.

The other segment of the population exempt from the draft is the Arab citizens of Palestinian descent. They’re branded by fellow Jewish citizens a “fifth column” suspected of “double allegiance”.

Most Muslims don’t serve in the army. Exceptions to the sweeping exemption, Bedouin, who are Muslim, enlist in the army on a voluntary basis; for Druze, an offshoot of Islam, military service is mandatory.

Shlayan’s forum has now expanded into the Sons of the Alliance Christian party which preaches greater loyalty to the State of Israel.

“Arab citizens enjoy security, but many in their heart dream of Israel’s destruction. Whatever happens to the Jews will happen to us as well,” Shlayan charges.

Hakim reproves Shlayan’s accusation: “This army occupies Palestine. My state fights against my people. This forum for enlisting Christians is a Zionist conspiracy to separate the Christians from the rest of the Palestinians.”

“Besides, ultra-orthodox Jews don’t serve and yet their rights are respected,” Hakim protests.

Arab citizens are made to feel second-class citizens. An endemic dearth of building permits affects their towns and villages. Higher unemployment, inferior municipal services, unequal allocation of resources in education and housing are their common lot.

Banned from the Church of the Annunciation for promoting the draft, Nadaf was embraced by Prime Minister Benjamin Netanyahu.

At the sports hall, it is Deputy Defence Minister Danny Danon who has come to pledge his support.

“I salute your willingness to integrate into the society,” Danon tells the assembly of age-draft Christians.

“The government plans to advance land re-zoning plans and allocations of plots for Christian ex-servicemen and women,” Danon promises. “The State of Israel is opening its doors to you. We want you ‘equal amongst equals’.”

A question flies from the hall. “When will housing projects break ground?” asks a teenager determined to give the government’s preacher a hard time.

“Our objective isn’t to build houses but to issue tenders for the allocation of plots for those who served in the army,” cautions Danon. “You mustn’t join because you may get a plot of land. Don’t be afraid. Be strong. Do the right thing.”

Samir Jozen encourages his daughter Jennifer to join the army next summer. “So what if we don’t get 100 percent of our rights. What we have, Syria’s or Egypt’s Christians don’t have,” is his declaration of faith.

For now, Arab Christian youth seem to see in the military service a communion of sort with Israel, a conversion from being Arab to being Israeli, a rite of passage from being rejected to hoping to be accepted, and the core of a stronger Christian identity in a precarious area.