Israelis Prepare Themselves Regardless 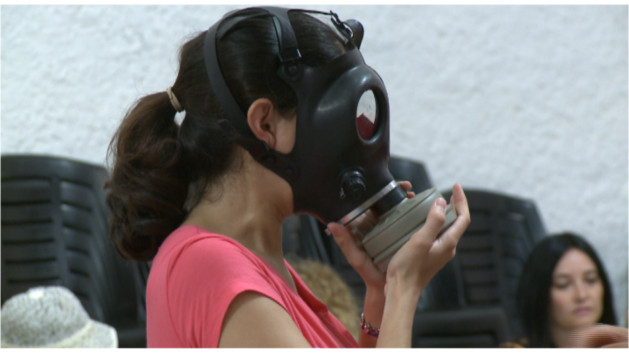 Israelis are equipping themselves with gas masks in anticipation of attack from Syria. Credit: Pierre Klochendler/IPS.

“Nothing’s sure in this country. There’s tension, then there’s relief, then tension again,” explains a woman as her daughter puts on a mask. “We must always be prepared for any emergency alert.”

On top of a hill near Jerusalem, an Iron Dome anti-missile battery inspects the sky for incoming rockets. Yet all is quiet on the Israel-Syria ceasefire line on the occupied Golan Heights.

Israeli Prime Minister Benjamin Netanyahu maintained a discreet silence over his U.S. ally’s threats of military strikes against Syria in retribution for the poison gas attacks allegedly perpetrated by forces loyal to the regime of President Bashar Assad, which killed hundreds on Aug. 21.

“Nothing’s sure in this country. There’s tension, then there’s relief, then tension again."

The Israeli leader now chooses to remain circumspect amid talks about the Russian plan. “It must be ensured that the Syrian regime will be disarmed of its chemical weapons,” he urged the international community on Wednesday during the Israel Defence Forces (IDF) naval cadets’ graduation ceremony.

The devil is in the details of an effective chemical disarmament process, cautions Shlomo Brom, a former director in the Strategic Planning Division of the IDF General Staff and now a senior fellow at the Institute for National Security Studies. The launching of the Russian plan will determine the fate of the U.S. military plan on Syria.

“The whole purpose of the punitive action is to deter Syria from further use of chemical weapons. If these weapons will be denied, then it’s even a greater achievement than the purpose of the U.S. attack,” Brom tells IPS.

Israelis form an orderly queue at gas mask distribution centres – in stark contrast with scenes of panic and chaos when U.S. strikes seemed to hang over Syria’s embattled regime.

During the early stages of the crisis, Netanyahu sought to assuage his compatriots’ fears, urging them to maintain their daily routine. “We’re not involved in the civil war in Syria,” he cautioned, stressing the low probability of Syrian reprisal attacks on Israel.

“The decision to do whatever is needed to project this perception that Israel isn’t intervening was a very right decision,” comments Brom. “A perception in the U.S. that Israel is pushing and dragging the U.S. into a war in the Middle East is basically not good for Israeli-American relations.”

Besides, the use, production and proliferation of chemical weapons is not an Israeli issue, stresses Dore Gold, a former Israeli ambassador to the UN and long-time Netanyahu advisor who presides over the Jerusalem Centre for Public Affairs think tank.

“Behind this entire crisis between Syria and the U.S. is a world problem, a violation of the Chemical Weapons Convention. The U.S. entered this struggle with global considerations in mind, and despite everything you read in the press, Israel is not at the centre of this,” Gold tells IPS.

Inversely central to the Israeli public’s considerations is the lack of trust in President Barack Obama’s management capabilities during the three successive phases of the crisis.

First, as the U.S. President expressed outrage at the chemical attack while urging military intervention on Syria; then, as he sought congressional legitimacy for the use of force; and now, as the momentum of a limited action dissipates in favour of the Russian initiative.

“If he wanted to go to Congress, he should’ve gone there from the beginning, not after he declared he wants to go to war,” is the reasoning of a physician who came to a distribution centre to pick up kits for his family. “How he managed the crisis is a show of weakness.”

“If what hides behind this Russian initiative is only a bluff, a trick, a delaying tactic,” Brom says, “then it may imply that the Obama Administration was weak, hesitant and incapable of using force to advance its political objectives.”

“It’s not for us to say whether Obama operates well or poorly,” counters Gold. “Israel cooperates with the U.S. in areas of mutual security interests and will continue to do just that.”

Noteworthy in this respect, Netanyahu has refrained from commenting on Obama’s leadership and performance during the crisis – although obliquely, on Wednesday, he did. Trust only yourself is his motto.

“The rule that as Prime Minister I adhere to carefully is perhaps more valid than ever: If we’re not for ourselves, who will be for us? We are for us,” he declared.

“The practical translation of this rule is that Israel will always defend itself by itself against any threat. President Obama said today [during the 9/11 anniversary], ‘Israel can defend itself with overwhelming force.’ This is true. This is the basis of our security.”

“The perception,” Brom says, “is that the U.S. is withdrawing from the Middle East and that, as superpower, it’s weakening and losing the will to use its power and serve its interests, which is an essential element of being a superpower.

“Because of that, Israel cannot trust the U.S. when it comes to decisions that are essential for its survival – for example, what to do with the Iranian nuclear programme.”

The taxing question is whether Obama’s acceptance of the Russian plan to disarm Syria of its non-conventional weapons conventionally answers Netanyahu’s concerns.

“The world needs to make certain that those who use weapons of mass destruction will pay the price for it. The message that Syria receives will be received loud and clear in Iran,” he declared.