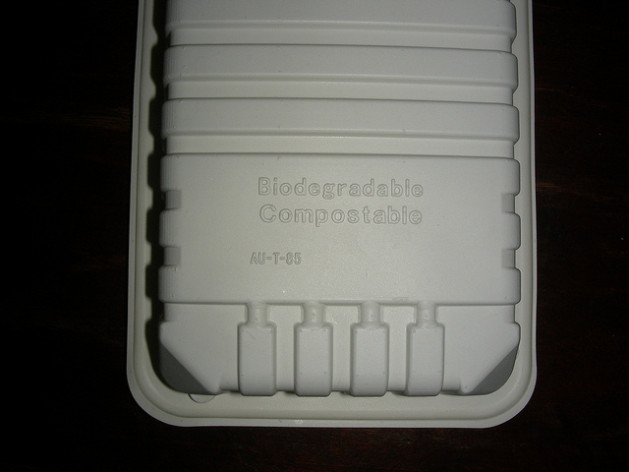 A Woolworths gourmet pork sausage tray. Biodegradable and compostable, it has been accepted by the Australiasian Bioplastics Association. Credit: Doug Beckers/cc by 2.0

WASHINGTON, Nov 21 2013 (IPS) - Eight major multinational consumer products companies have come together to investigate whether it is possible to produce a sustainable form of “bioplastic”, made from plants rather than petroleum products.

As announced Wednesday, members of the new Bioplastic Feedstock Alliance (BFA) include Coca-Cola, Nestle, Nike, Ford and others, as well as the World Wildlife Fund (WWF), the Washington-based conservation group. Organisers say the WWF will aim to bring scientific perspectives to the alliance on the thorny issues that have plagued the production of both bioplastics and biofuels.

"If we think about the amount of plastic that will be needed in the future, scaling up the monocrop industrial system will require an incomprehensible amount of land." -- Dana Perls

“As we follow the dialogue on biofuels, we can already understand the debate that will be on the emergence of the bioplastics industry, and a lot of these brands are now wondering how they can do this right from the beginning and avoid unintended consequences,” Erin Simon, manager of the WWF’s packaging and material science programme, told IPS.

“Working with WWF could be valuable in saying, ‘Here’s the science behind some of these questions and here’s how we’ll avoid negative impacts on the environment and society at large. As a conservation organisation concerned with prioritising the ecosystems producing these raw materials, it’s important to have these companies asking for guidance on food security, land-use issues and the broader use of chemicals.”

Simon describes the alliance as “technology neutral”, meaning that it will not actually function to pool corporate resources on research and development of bioplastics. However, five of the companies involved – Coke, Ford, Heinz, Nike and Procter & Gamble – are already doing so through a separate grouping, called the Plant PET Technology Collaborative (PTC).

Unveiled in June 2012, the PTC aims to collaboratively develop a common type of plastic (known as PET) made entirely from plant materials. The initiative has piggybacked on a material already in commercial use by Coca-Cola and others that is made of 30 percent plant material, from sugarcane.

Unilever and Danone, two other members of the new BFA, are already using some plastics made from 100 percent plant material, coming from a variety of sources. Still, today only around one percent of plastics being produced are made with plant materials.

Interest in alternatives to the ubiquitous petroleum-based plastic that characterises modern consumerism has increased substantially in recent years, driven both by consumers and the manufacturers that supply them. Even while issues of environmental sustainability have become increasingly common considerations, concerns continue to mount about how today’s industries will evolve in a post-“peak oil” world.

“Companies understand they need to be creating solutions today for the future because they won’t have these resources forever. But while plastics made from petroleum products are extremely efficient and pretty low-cost, feedstock production is not benign,” Simon says.

“The feedstocks being used today are sugarcane, corn, etc, and there’s a lot of pressure to move away from these first-generation sources because they’re considered food competitive. So the question is: Are they food competitive? And if they are, what next-generation feedstock could provide for more sustainable raw material sourcing?”

One of the companies involved in the new BFA, the U.S.-based consumer goods conglomerate Procter & Gamble, has a long-term plan to work towards using 100 percent renewable or recycled materials in its products and packaging. It says bioplastics represent an important opportunity in this regard.

Still, the company acknowledges that obstacles continue to stand in the way of this goal.

“We clearly recognise that as we evaluate potential feedstocks for bioplastics, we will need to ensure they are being sourced responsibly and sustainably,” Jack McAneny, a global sustainability officer with the company, told IPS. “BFA represents a fantastic opportunity to work with like-minded companies, WWF and other stakeholders to evaluate potential bioplastic feedstocks and help ensure responsible and sustainable sourcing practices.”

Others are concerned over whether this sourcing can ever be done responsibly. Some environmentalists worry that the nascent bioplastics industry – indeed, the broader synthetic biology sector – is so poorly regulated right now that answering questions related to sustainability is going to come down to self-oversight by the industry itself.

“While it’s very encouraging that these companies want to find sustainable solutions to these problems, it’s really important that the questions this new alliance looks at are comprehensive, addressing ecological, economic and social impacts in the short and long term,” Dana Perls, a campaigner for the food and technology programme at Friends of the Earth U.S., a watchdog group, told IPS.

“Do we have enough land to produce the feedstock required to feed growing demand for plastic? If we think about the amount of plastic that will be needed in the future, scaling up the monocrop industrial system will require an incomprehensible amount of land. We need to have a very good understanding of the economic impact that this could have on entire economies across the Global South.”

Perls also notes that the discussion over bioplastics is just one component of the broader debate over synthetic biology, the implications of which are still being explored by scientists.

“Currently there is no government regulation anywhere in the world looking at the biotechnology issue broadly – the companies are leagues ahead of the governments in the U.S. and internationally,” she says.

“That means it’s the companies producing the products, those that are most financially invested, that are doing the testing. In our opinion, this industry can’t be self-regulated. We need a strict, thorough regulatory framework before any of these companies are allowed to say that a new bioplastic is a sustainable product that can be put out on the market.”