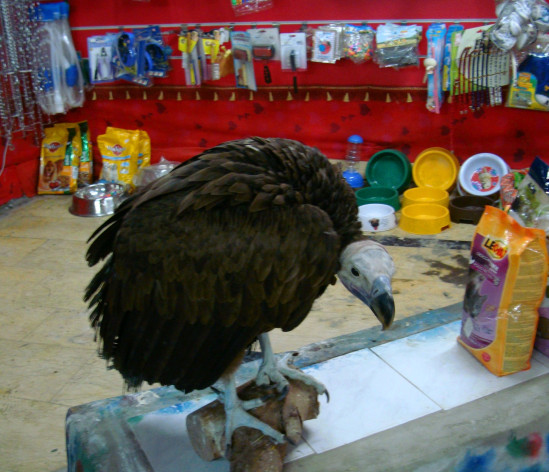 Exotic pets such as vultures are trafficked and sold openly in Egypt. Credit: Cam McGrath/IPS.

CAIRO, Dec 26 2013 (IPS) - At a small pet shop in an upscale Cairo neighbourhood, puppies, kittens and sickly-looking parakeets occupy the cages behind the storefront window. But if you want more exciting and exotic animals – such as crocodiles or lion cubs – just ask behind the counter.

Trade in wild animals is banned under the Convention on International Trade in Endangered Species of Wild Fauna and Flora (CITES), of which Egypt is a signatory. But decades of ineffective border controls and police indifference have made the country a major hub for the trafficking of wildlife.

Conservationists suspect that criminal gangs have expanded their networks and stepped up shipments of protected and endangered species under cover of the political turmoil that has engulfed the region since the start of the Arab Spring.

“Since the revolution in 2011, Egypt has fewer resources for enforcement, and traffickers have recognised this,” an environment ministry official told IPS. “The country is facing many serious political and economic problems, and checking shipments for wildlife is not a priority.”

"Since the revolution in 2011, Egypt has less resources for enforcement, and traffickers have recognised this."

Cairo is less a destination than a transit point for animals trafficked from Africa to markets in Asia and the Arab Gulf states. Rare and endangered animals are concealed in air and sea shipments, or smuggled overland through the porous borders of Libya and Sudan.

In recent years, authorities have seized satchels full of dying tortoises, rare birds stuffed into toilet paper rolls with their beaks tied shut, and a pair of dolphins floundering in a murky swimming pool. Foreign customs officers have also discovered baby chimpanzees drugged with cough syrup and crammed into crates shipped from Egypt.

Many of the trafficked animals are kept in rented apartments in Cairo and Alexandria that act as showrooms for prospective buyers. Others fill the overcrowded and dirty cages of disreputable pet shops, or end up in the country’s growing number of private zoos.

One licensed pet store in Cairo’s Zamalek district had its front end geared for the pampered pets of the district’s affluent residents, with imported pet foods, rhinestone studded dog collars, and colourful catnip toys. Further back the shop catered to more exotic tastes, with pens of juvenile crocodiles, caged fennec foxes, and a full-grown vulture that was eventually sold to a local businessman for 1,200 dollars.

“The store wasn’t shut down for selling endangered species or its appalling treatment of the animals,” says local resident Dalia Awad. “It was because the neighbours complained about the smell.”

Pet shops come and go. One business that has endured is Tolba Kingdom Reptiles, the flagship operation of the Tolba family.

Their showroom in Abu Rawash, 30 kilometres from Cairo, contains a macabre collection of desiccated lizards, rows of gazelle horns, and an ineptly stuffed lion. A series of pens and cages house hyenas, raptors, servals, fennec foxes, and mongooses. Gorillas are often kept in another building.

“We can get any animal and ship it anywhere,” boasts Salah Tolba, who heads up the family business. “Most dealers don’t know how to handle wildlife and many of the animals die from trauma. But our family has long experience in this business. We have large cages and we treat our animals better here than at the zoo.”

This is probably true, concedes animal welfare activist Dina Zulfikar, “but in general, neither has the acceptable standard for keeping animals in captivity.”

Trafficked animals confiscated by Egyptian authorities are sent to the government-run Giza Zoo, which was expelled from the World Association of Zoos and Aquariums in 2004 for its deplorable conditions and inhumane treatment of animals.

Many of the lions and chimpanzees at this zoo were seized during raids on private collections. The confiscated animals become a source of personal revenue for the underpaid zookeepers, who allow visitors to handle the sedated animals in exchange for tips.

“They receive no care… and die or are stolen, are used for photo sessions, or are sold to circus trainers,” says Zulfikar. “Zoo veterinarians conduct in vitro fertilisation experiments on the lions.”

Since the 1990s, private zoos and wildlife breeding centres in Egypt have mushroomed. Some, such as Lion Village, cater to paying tourists undeterred by the shocking conditions of the exhibits. Others are protected from prying eyes by fences and guarded by thugs with automatic weapons.

“Authorities in Egypt are toothless,” says wildlife photographer and conservationist Karl Ammann. “It is impossible to get anyone to take any action. The police are afraid of these smugglers, who are trafficking all types of animals.”

One ringleader, who smuggled chimpanzees and gorillas from central Africa via Egypt for decades, is reportedly serving time in a Nigerian prison. But her three daughters have allegedly continued the trade, aided by a family member who serves as a Libyan border guard.

Another black market dealer operates a primate breeding centre under the pretext of a ‘national rescue centre’ in the Red Sea resort Sharm El-Sheikh. Dozens of gorillas and chimpanzees languish in its cages, their trade facilitated by a loophole in CITES regulations that set a quota on the total number of each species a facility is permitted to hold, rather than issuing individual permits for each animal.

Ammann says there is evidence that Egyptian wildlife officers, and even local CITES representatives, are complicit in the trade.

“Authorities know what is going on at these facilities and never intervene as (CITES) Article 8 demands,” he says.