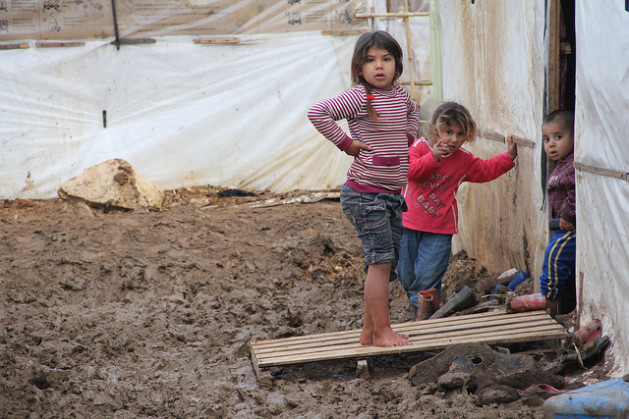 GENEVA/STOCKHOLM, Dec 6 2013 (IPS) - The terrible bloodshed in Syria has been going on for over two and a half years. It has caused one of the worst humanitarian crises in recent history, with more than half of Syria’s pre-war population now needing humanitarian assistance for their survival.

Nearly 2.3 million Syrians have fled to neighbouring countries, including over 1.1 million under the age of 18. The suffering caused by the conflict is particularly devastating for these children – they experience trauma and isolation, over half of them are missing out on schooling, and far too many are forced to work to help feed their families.

As this cruel conflict drags on, future generations will look back at today and judge those who had the means to alleviate the human suffering.

Syria risks losing an entire generation – and with it, its future, as today’s children are the ones who could rebuild their country when peace finally sets in.

What is unfolding on Europe’s doorstep today is not only a humanitarian crisis unparalleled in recent history. The impact of the enormous refugee influx on host countries in the Middle East is also fuelling fundamental, structural problems in an already fragile region. The crisis in Syria threatens peace and stability far beyond the country’s borders: a threat that can no longer be downplayed.

This is why we are joining our voices today to urge the international community to recognise and act upon the pressing need to step up international solidarity in response to the refugee crisis.

For European Union member states, this means concretely to focus less on protecting borders and more on protecting people, and to turn into action their commitments for more solidarity and burden-sharing with the countries in the Middle East that host the vast majority of Syrian refugees.

Sweden has granted protection to the largest number of Syrians outside the Middle East – over 20,000 since the beginning of the conflict, including asylum seekers and refugees resettled from countries in the region. Under Sweden’s chairmanship, a number of resettlement countries have formed a Contact Group with UNHCR to promote international resettlement as well as other forms of admission for up to 30,000 Syrian refugees by the end of 2014.

Already earlier this year, Germany set an important example by offering humanitarian admission to 5,000 Syrian refugees who had fled to Lebanon.

In addition to resettlement, European countries must show more solidarity with Syrians who arrive in the EU, for example through swifter access to effective asylum procedures and, in many cases, better reception conditions.

In September 2013, Sweden marked an important milestone by becoming the first EU member state to grant all Syrian refugees permanent residence. As the world begins to realise that the conflict in Syria is unlikely to be resolved in the short term, more countries have to provide refugees with permanent residency. This would allow them to rebuild a life without a return date looming. It also facilitates integration and family reunification for Syrians in in the host country.

More countries must now follow suit and come forward with protection schemes similar to those of Sweden and Germany. Far too many people fleeing Syria have already lost their lives trying to cross the Mediterranean Sea, such as in the recent shipwrecks off the Italian island of Lampedusa. Many others are abused by smugglers as they attempt to enter Europe through remote land borders.

There is something fundamentally wrong in a world where people who are desperately seeking protection from violence and conflict are forced to take such perilous journeys. Providing them with alternative ways of accessing safety, such as family reunification, resettlement, and better reception and asylum conditions, will help to reduce the number of people putting their lives at risk and resorting to smugglers and other irregular means of entry.

Showing solidarity or doing nothing are not options to be debated. As this cruel conflict drags on, future generations will look back at today and judge those who had the means to alleviate the human suffering by their determination to put these means to use. Europe – all of Europe – must do better in this.

António Guterres is the United Nations High Commissioner for Refugees. Anders Danielsson is General Director at the Swedish Migration Board.