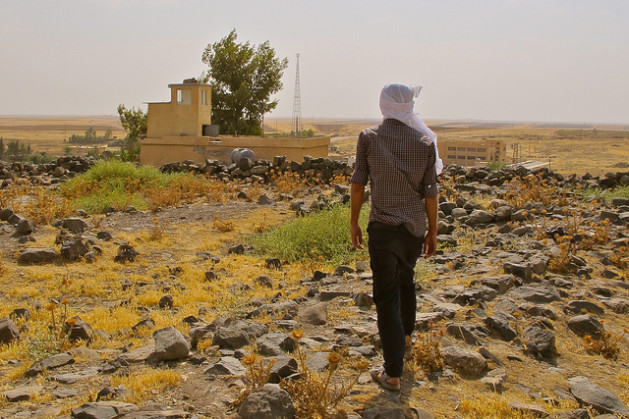 A man walks by the police checkpoint in Gundik Shalal in northeast Syria. The war in Syria has increased the number of refugees seeking refuge in Europe. Credit: Karlos Zurutuza/IPS.

ATHENS, Sep 20 2013 (IPS) - While the relentless war in Syria continuously adds to the number of refugees travelling west to Europe, Greece is fast becoming a nation they are choosing to avoid.

The majority of Syrians, and also others fleeing their countries, are now trying to reach northern Europe through other routes. And the tough Balkans is emerging as one such alternative.

With more migrants than it can handle and the enduring economic crisis turning locals xenophobic, Greece launched an operation to shield its borders in the spring of 2012. Meanwhile, irregular immigrants as they are termed, have been put en masse in detention centres while police atrocities and human rights abuses have been exposed in recent months.

“The western Balkan route has seen an increase of 300 percent since the beginning of the year." -- Isabella Cooper, spokesperson for Frontex, the European Union agency for external border security

Considered by many as the last possible path to northern Europe, it is a trip full of horrors, says Hasam Nazari, a 25-year-old gifted musician from Afghanistan. He is among those to have taken the illegal route several times, after spending 18 months in Greece.

Nazari’s aim has been to get north to Hungary and from there to Austria. He has attempted to do so on five occasions now before running out of money and returning to Greece.

“We saw a 13-year-old being raped by a mafia gang after crossing the border into Fyrom (Former Yugoslav Republic of Macedonia),” he tells IPS. “If you do not have euros to give them, they maim you.”

They wait at the region beyond the border, Nazari says, near abandoned houses on the way to the interior. “They ride bikes, around 10 or 12 of them, and have guns,” he adds.

Looting people is common. “They take you into the forest, strip you naked and steal everything valuable you have,” says Nazari. “You are lucky if they don’t beat you up as well.”

The police know what is happening. “We were beaten up in front of them and they looked the other way,” says Nazari. They are concerned more with treating the arriving refugees and illegal migrants with a heavy hand, he adds.

The trend of migrants and refugees taking the Balkan route has started showing up in statistics beginning 2013, says Isabella Cooper, spokesperson for Frontex, the European Union agency for external border security.

“The western Balkan route has seen an increase of 300 percent since the beginning of the year,” she tells IPS.

Bulgaria has seen the largest increase, with the influx of people coming in from Syria, Algeria, Iraq and Pakistan increasing sixfold, she adds.

“We have seen a shift to the east along the border,” acknowledges Boris Cheshirkov of the public information unit of the United Nations Refugee Agency (UNHCR) in Bulgaria. “Now the biggest groups cross over through the thick forests of the Strandzha Mountains [to the country’s southeast border with Turkey]. It is extremely difficult terrain with very poor visibility.”

Smugglers have cottoned on to these new routes already and started asking desperate immigrants for more money to lead them to the border. If they were asking for 500 euros (670 dollars) per immigrant earlier to take them to the Turkish-Greek border along the river Evros, their rates now have gone up to nearly 3,500 euros (4,700 dollars).

Despite that, says Cheshirkov, “the smugglers take the groups just close to the border, they don’t cross with them, or guide them.”

He cites the example of Uaheyda Noor, a Syrian refugee now serving time at a prison in Silven, a city 130 km from the border with Greece and Turkey.

“The 35-year-old mother of four arrived in Bulgaria with her husband Abdul Hanan Noor, 38, in December 2012,” Cheshirkov tells IPS.

The family was accommodated at the refugee centre in the border city of Pastrogor. However, in January, Noor attempted to leave Bulgaria for Serbia with a daughter and son. She was stopped by the border police, sentenced to eight months in prison and has been in Silven since February.

“She was due for release in August, but hasn’t been as far as I know,” says Cheshirkov.

Serbia too is reeling under a rising migrant influx. From the 2,000 irregular migrants that came into the country in 2010, the number went up to 9,500 by 2011 and to 15,000 the following year, according to the Serbian Centre for Migration set up by non-governmental organisation Grupa 484. Another 20,000 are estimated to have crossed into the country this year.

However, Nenad Banovic, the Chief of Border Police in Serbia, says:  “We have seen a small reduction in arrivals in the first six months of 2013.” He attributes this to the opening up of the Turkey-Bulgaria-Romania route as well as the Greece-Fyrom-Kosovo-Montenegro-Bosnia-Croatia one.

But like in Greece, the pressure of immigrants is beginning to tell on the asylum facilities of Bulgaria and Serbia too.

All three of Bulgaria’s refugee centres – one in capital Sofia, and two closer to the Turkish border at Banya and Pastrogor – are operating above their 1,170-people capacity.

The Serbian system is also trying to cope with the influx of refugees.

“We are struggling to provide for them,” says Banovic, “but Serbia has limited resources and no help from Europe.”

The difficulties do not deter migrants from heading for the border city of Subotica 184 km north of Belgrade, says Nazari, the Afghan musician. Many families reside in an old brick factory in the city. Others stay in the forest adjoining the city until they can try their luck at the Hungarian border a few kilometres north.

Most of them get caught while trying to cross and sent back. “Most of these returns are unofficial but occasionally some are sent back formally,” says Mirolava Jelacic, a legal analyst at Grupa 484.

However, those who do make it across continue to inspire others to keep coming back.