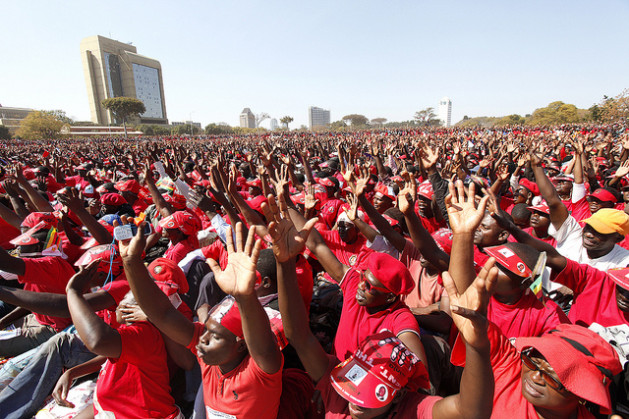 HARARE, Dec 23 2013 (IPS) - Losing the Jul. 31 polls in Zimbabwe may have been a heartrending experience for the country’s former prime minister, Morgan Tsvangirai, but a veiled succession struggle in his own party may prove the straw that breaks his political career.

Over 100 days after the Jul. 31 elections in this southern African nation, fanatical supporters of Zimbabwe’s opposition Movement for Democratic Change (MDC) like Melford Gananda are fast withdrawing from politics.

"The MDC-T has not yet reached the end of the road in its life...but it has to stop the power wrangles and all the succession talk before it dislodges Mugabe." -- Claris Madhuku

But despite losing the controversial poll to long-time ruler Robert Mugabe, the MDC-Tsvangirai faction (MDC-T) leader appears determined to soldier on at the helm of the largest opposition party in the country.

“If the election was stolen, you cannot ask for leadership renewal unless you have other motivations; for somebody to ask me to abandon the responsibility and mandate l was given only two, three years ago is not only irresponsible on my part; it is a betrayal of the people’s expectations and aspirations,” Tsvangirai told journalists on Sept. 18 at his party headquarters in Harare.

Gananda, however, feels it is time Tsvangirai hands the party’s top spot to the MDC’s next generation.

“Tsvangirai has outlived his political popularity and he can’t turn back the hands of time; surely he must give way to the new crop of leaders in the party to keep it afloat,” Gananda told IPS.

“I’m one of the people who stood with Tsvangirai since 1999 when the MDC was formed and I have been hoping to see him in power for all these years, but disappointment followed disappointment as Tsvangirai fell victim to a litany of stolen polls. I can’t stick to him any longer,” said Gananda.

“The fact that the MDC-T leader has for three consecutive occasions suffered electoral defeat at the hands of a party that has been in power for more than three decades means that he [Tsvangirai] has arrived at his political expiration date and should replace himself with a new leader,” Tigere told IPS.

“MDC-T is the party that jolted Mugabe from political slumber and helped him realise that there were people out there who could challenge him and cause his fall from political supremacy and President Tsvangirai may be there to complete the struggle for change at the 2018 elections,” Mwonzora told IPS.

In 2000, during a period of waning popularity for Mugabe that coincided with the height of violent commercial land seizures here, the MDC triumphed in Zimbabwe’s parliamentary elections.

But in the 2002 presidential elections, Tsvangirai lost to Mugabe in a vote that was widely believed to be flawed.

Six years later, Tsvangirai won the presidential elections but could not garner enough votes to avoid a run-off marred by violence against his supporters by suspected Zanu-PF operatives. Mugabe eventually claimed unopposed victory after the MDC-T leader pulled out of the race.

A weak unity government brokered between President Mugabe and Tsvangirai followed until elections this year once again saw the MDC-T controversially losing to Mugabe.

According to Claris Madhuku, director of Platform for Youth Development, a democracy lobby group here, the MDC-T still has a future.

“Surely, the MDC-T has not yet reached the end of the road in its life, but what the party may need to do is to reposition itself in a way that would ensure it manages to unseat Mugabe strategically; it has to stop the power wrangles and all the succession talk before it dislodges Mugabe, with Tsvangirai as the face of the party,” Madhuku told IPS.

With growing calls from party subordinates for Tsvangirai to step down from the helm of MDC-T, fears abound amongst staunch supporters like Hillary Dzirutwe of Marondera in Zimbabwe’s Mashonaland East Province that Tsvangirai’s departure may mark the end of the MDC-T.

But political analyst Zacharia Mushawatu feels both the ruling Zimbabwe African National Union Patriotic Front (Zanu-PF) and the MDC-T are seized with the problem of personality cult, which endangers their future existence.

“The ruling Zanu-PF and the MDC-T are being eroded by the personality cult challenge in which both parties believe they cannot do without their founding fathers, resulting in the parties’ succession headaches,” Mushawatu told IPS.

But Mushawatu believes that despite controversially losing to Mugabe on several occasions, Tsvangirai remains popular with his supporters in this southern African nation.

“If Tsvangirai leaves now, his party will be torn into several factions, which may ultimately mark its eventual demise, consequently handing perpetual political hegemony to the ruling Zanu-PF,” said Mushawatu.

And in a move that would likely widen fissures in the MDC-T, Elias Mudzuri, an executive MDC-T member and parliamentarian for Harare’s Warren Park constituency, is being widely tipped as a successor to Tsvangirai.

Party insiders here say under Mudzuri’s leadership, the MDC-T wouldn’t fall apart as many have anticipated.

“Mudzuri is quite organised and methodical in his approach to politics and surely MDC-T won’t fall apart under his leadership; Mudzuri also commands respect,” said a top MDC-T official who, fearing reprisals, requested anonymity during an interview with IPS.

Mudzuri, meanwhile, has warmed to the milling succession gossip.

“We respect people’s demands; if they say let there be new party leadership, then so be it,” Mudzuri told IPS, insisting the 2016 MDC-T congress will solve the succession puzzle.

Independent political analyst Langton Maramba says changing MDC-T leadership could give give the ruling Zanu-PF more leverage against it.

“Installing a new leader for the party now against the long-time ruling Zanu-PF may be too late and may render MDC-T popularity waning at the 2018 polls here,” Maramba told IPS.

With this in mind, Maramba says the future of the opposition MDC-T hangs in the balance.

The million-dollar question, then, is can the centre hold for Zimbabwe’s main opposition party come elections in 2018, or will things fall apart before then?