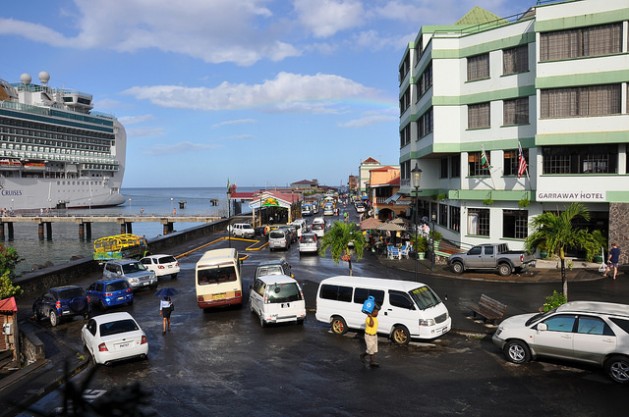 People go about their daily lives in Roseau, Dominica. The country’s chief medical officer says climate change is taking a toll on the health of people. Credit: Desmond Brown/IPS

ROSEAU, Dominica, Jan 20 2014 (IPS) - Caribbean countries, struggling to emerge from a slump in exports and falling tourist arrivals brought on by the worldwide economic crisis that began five years ago, have one more thing to worry about in 2014.

Dominica’s chief medical officer, Dr. David John, said climate change and its effects are taking a toll on the health of people in his homeland and elsewhere in the region.

“A lot of diseases will essentially create havoc among people who are already poor." -- Dr. Lystra Fletcher-Paul

“You have seen what is happening [with] the effects of climate change in terms of our infrastructure, but there are also significant effects with regards to climate change on health,” John said, adding that “these effects relate to the spread of disease including dengue fever and certain respiratory illnesses.”

John said the Dominica government would be seeking assistance from international agencies, including the World Meteorological Organisation (WMO), to mitigate “the effects of climate change on health as it relates to dengue, leptospirosis and viral disease.”

In late 2012, the Ministry of Health in Barbados alerted members of the public about a spike in leptospirosis cases. Senior Medical Officer of Health-North Dr. Karen Springer said then that five people had contracted the severe bacterial infection, bringing the number of cases for the year to 18.

Springer explained that the disease, which includes flu-like symptoms such as fever, headache, chills, nausea and vomiting, eye inflammation and muscle aches, could be contracted through contact with water, damp soil or vegetation contaminated with the urine of infected animals. Bacteria can also enter the body through broken skin and if the person swallows contaminated food or water.

In recent years, dengue has also been on the rise throughout the Caribbean with outbreaks in Dominica, Barbados, Trinidad and Tobago, Puerto Rico and the French islands of Martinique and Guadeloupe, among other places.

Professor of environmental health at the Trinidad campus of the University of the West Indies Dr. Dave Chadee told IPS there is ample “evidence that climate-sensitive diseases are being tweaked and are having a more significant impact on the region”.

He said he co-authored a book with Anthony Chen and Sam Rawlins in 2006 which showed “very clearly” the association between the changes in the seasonal patterns of the weather and the onset and distribution of dengue fever.

“There is enough evidence, not only from the Caribbean region but worldwide, that these extreme events are going to have and going to play a significant role in the introduction and distribution of these sorts of diseases in the region,” Chadee, who previously served as an entomologist at the Insect Vector Control Division of the Ministry of Health in Trinidad and Tobago, told IPS.

“If you look at the various factors that are associated with climate change, the first is heat waves. There has also been a reduction in air quality. You also see an increase in fires and the effects on people’s ability to breathe as well as the association between the Sahara dust and asthma which was demonstrated in Barbados and Trinidad recently.

“The Sahara dust which comes in from Africa brings in not only the sand but also other pathogenic agents within the sand, together with some insecticides which have been identified by people working at the University of the West Indies,” Chadee told IPS.

Dr. Lystra Fletcher-Paul, the Food and Agriculture Organisation (FAO) representative for Guyana, said she has no doubt that climate change has contributed significantly to some of the issues related to diseases in the region.

“If you look at some of the impacts of climate change, for example drought, with drought you are going to increase the amount of irrigation that you are going to be applying to the crops. And irrigation water is a source of pesticides or even chemicals, depending on where that source of water is and that could lead to problems in health,” she told IPS.

“Similarly with the extreme events, if you are talking about floods, there can be contamination of the fresh-water supply.”

The FAO representative is adamant that there is too much “talk” in the Caribbean and too little “implementation”.

“We have had the conversation, so what we need to do now is put the systems in place to mitigate and adapt to climate change,” she said. Using land-use planning as an example, Fletcher-Paul told IPS, “A lot of what we see happening in St. Vincent and St. Lucia may not necessarily have taken place if we had proper land-use planning.”

A slow-moving, low-level trough on Dec. 24 dumped hundreds of millimetres of rain on St. Vincent and the Grenadines, St. Lucia and Dominica, killing at least 13 people. The islands are still trying to recover.

“So we need to take some hard decisions in terms of where we would allow development to take place or not,” Fletcher-Paul said.

Chadee said the poor would always be at a disadvantage in  climate change scenarios and they will suffer the most from sea level rise when you have salt water intrusion into fertile agricultural land, rendering them unsuitable for food production.

“A lot of diseases will essentially create havoc to people who are already poor. The adaptability of the poor versus the rich within the Caribbean region will be tested because if the poor are no longer able to produce some of their food, this would then lead to health problems.”

He explained that if the poor are no longer able to have a particular diet this would make them susceptible to a number of diseases.

“With the Caribbean region having developing states, and especially Small Island Developing States, we do have a unique situation where the resources have to be put in place, especially for adaptation,” Chadee told IPS.

“It’s almost like the wall of the reservoir has been breached and you know that the water is coming. You don’t know how high the water level is going to be but you know it’s coming, so what do you do? And that essentially is the scenario in which we have found ourselves in the Caribbean,” Chadee added.