WASHINGTON, Jan 29 2014 (IPS) - The subtitle of Gareth Porter’s new book, “The Untold Story of the Iran Nuclear Scare,” is well-chosen. Large parts of “A Manufactured Crisis” are indeed untold till now. They amount to what the author terms an “alternative narrative”. 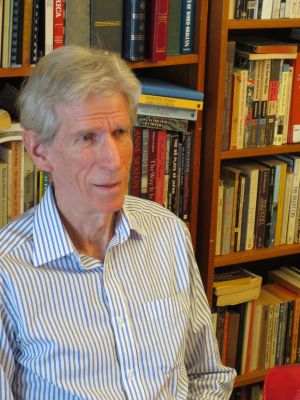 But don’t be misled by “alternative”. This is not the work of some crank who imagines conspiracies where none exist. One senses, rather, from the author’s meticulous sourcing and the extent of his research that what motivates him is a fierce hunger for truth and aversion to deceit.

Porter has been investigating the Iranian nuclear case for the best part of a decade. The result of his researches is both a fascinating addition to a growing corpus, unlike any previous work on the issue, and a disturbing indictment of U.S. and Israeli policies.

One central theme is that hidden motives have coloured these policies. On the U.S. side, Porter explains, the end of the Cold War led to a federal bureaucratic interest in exaggerating the WMD and missile threat posed by Iran (and other emerging countries) to justify funding bids.

During the presidency of George W. Bush, some senior administration members also sought to exploit nuclear fears to “delegitimise” the Iranian government and engineer a pretext for enforced regime change.

On the Israeli side, every government since 1992 – both Likud and Labour – has seen advantage in dramatising the Iranian threat and in demonising Iran’s leaders.

“Iran and Shi’a fundamentalism are the greatest threats to global peace,” proclaimed one Israeli document. The purpose has been to maintain the value of Israel to the U.S. as a “strategic ally”, to distract global unease from Israel’s nuclear weapons arsenal, and to create excuses for remaining in occupation of Palestinian territory.

Porter concludes: “U.S. and Israeli policies have been driven by political and bureaucratic interests, not by a rational, objective assessment of available indicators of the motives and intentions of Iranian leaders.”

Another central theme, one that complements the hidden motive theme, is that intelligence material and intelligence assessments have played a baleful part in this saga.

Faulty interpretation of intelligence in the early 1990s led U.S. analysts to believe in a full-scale, clandestine nuclear weapons programme, according to Porter, whereas, in his view, the weapons programme never amounted to more than some weapons-related research between the late 1990s and 2003.

Faulty interpretations can be forgiven. More seriously, Porter’s researches suggest that in the first half of the last decade, U.S. analysts ignored or discounted evidence that called into question the assessments made in the 1990s.

A CIA contract officer who transmitted human reporting that Iran did not intend to “weaponise” the product of its enrichment plants was ordered to cease contact with the source. Those within the CIA who pointed out the absence of evidence that Iran’s leaders had decided to make a nuclear weapon were unable to get this reflected in assessments.

Analysts refused to give weight to the outlawing of nuclear weapons on religious grounds, although by then it was clear that Iranians had respected a similar religious ban on chemical weapons. Iranian assurances of peaceful intent, or at least of an intention to go no further than mastering the fuel cycle, “to enable neighbours to draw the necessary inference”, were disregarded.

A still more serious charge is that Israel has engaged in the forgery and fabrication of intelligence.

Since early 2008 the case against Iran has rested mainly on material stored on a laptop. The material came into U.S. hands in 2004, and was passed to the International Atomic Energy Agency (IAEA) in 2005. For two and a half years, IAEA officials regarded the material as dubious and made no use of it. It was only in 2008 that they started to press Iran to answer for it. Porter implies that their initial scepticism was justified by laying out extensive grounds to believe that Israel fabricated this crucial material.

Porter is also convinced that Israel fabricated two other documents that have kept the Iranian case alive, despite a U.S. National Intelligence (NIE) finding in late 2007 that Iran had abandoned its nuclear weapons programme in 2003, and despite the IAEA reporting in early 2008 that Iran had resolved all the concerns that had arisen out of IAEA investigations in the preceding years.

In 2008, Israel passed to the IAEA intelligence suggesting that, years earlier, Iran had conducted nuclear weapon detonation tests at its Parchin military site. Then in 2009 Israel supplied “evidence” that Iran had resumed weapons-related research post-2003.

If Porter is right, and if all three of these grounds for pursuing the case against Iran were fabricated, that is a very serious matter. The U.S. and its European allies, assuming this intelligence to be reliable, have rejected Iranian protests to the contrary. Indeed, they have interpreted the Iranian response as a refusal to cooperate with the IAEA, and on that basis they have mobilised international support for sanctioning Iran to the hilt. Those sanctions have hurt Iranians and have damaged European and Asian economies.

The supposed refusal to cooperate has also served to justify maintaining U.N. demands that were first made of Iran before the 2007 NIE, when it seemed reasonable to consider Iran’s nuclear programme a threat to peace, but which became inappropriate after the 2007 NIE and once the IAEA had reported the resolution of all its pre-2008 concerns.

No doubt some readers will prefer to continue believing in the authenticity of this Israeli intelligence material. That may or may not turn out to be the right call.

One inference, though, from “Manufactured Crisis” looks inescapable. There has never been conclusive evidence that Iran’s Islamic leaders want to have or to use nuclear weapons. All talk of an “Iranian nuclear threat” is therefore premature. Consequently, the draconian measures implemented by the U.S. and its allies to avert that threat are unreasonable and unwarranted.

*Peter Jenkins was a British career diplomat for 33 years following studies at the universities of Cambridge and Harvard. He served in Vienna (twice), Washington, Paris, Brasilia and Geneva. His last assignment (2001-06) was that of UK Ambassador to the IAEA and UN (Vienna). Since 2006 he has represented the Renewable Energy and Energy Efficiency Partnership.