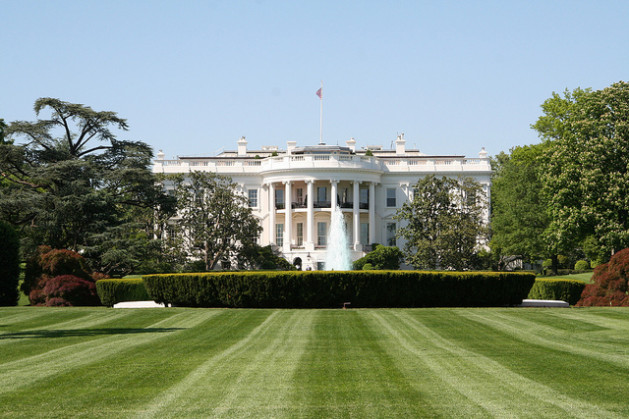 Questions have arisen on the Obama administration's commitment to concluding a final pact that would lift economic sanctions on Iran. Photo credit: Mark Skrobola

WASHINGTON, Nov 26 2013 (IPS) - The “first step” agreement between Iran and the United States that was sealed in Geneva over the weekend is supposed to lead to the negotiation of a “comprehensive settlement” of the nuclear issue over the next six months, though the latter has gotten little attention.

But within hours of the agreement, there are already indications from senior U.S. officials that the Barack Obama administration is not fully committed to the conclusion of a final pact, under which economic sanctions would be completely lifted.

The administration has apparently developed reservations about such an “end state” agreement despite concessions by the government of President Hassan Rouhani that were more far-reaching than could have been anticipated a few months ago.

In fact the Rouhani government’s moves to reassure the West may have spurred hopes on the part of senior officials of the Obama administration that the United States can achieve its minimum aims in reducing Iran’s breakout capacity without giving up its trump cards—the harsh sanctions on Iran’s oil expert and banking sectors.

“What we are going to explore with the Iranians and our P5+1 partners over the next six months,” said one of the officials, “is whether there can be an agreed upon comprehensive solution that assures us that the Iranian programme is peaceful.”

The same official prefaced that remark by stating, “In terms of the ‘end state’, we do not recognise a right for Iran to enrich uranium.”

Later in the briefing, a senior official repeated the same point in slightly different words. “What the next six months will determine is whether there can be an agreement that…gives us assurance that the Iranian programme is peaceful.”

Three more times during the briefing the unnamed officials referred to the negotiation of the “comprehensive solution” outlined in the deal agreed to Sunday morning as an open-ended question rather than an objective of U.S. policy.

“We’ll see whether we can achieve an end state that allows for Iran to have peaceful nuclear energy,” said one of the officials.

Those carefully formulated statements in the background briefing do not reflect difficulties in identifying what arrangements would provide the necessary assurances of a peaceful nuclear programme. Secretary of State John Kerry declared at a press appearance in Geneva, “Folks, it is not hard to prove peaceful intention if that’s what you want to do.”

The background briefing suggested that in next six months, Iran would have to “deal with” U.N. Security Council resolutions, which call for Iran to suspend all enrichment activities as well as all work on its heavy reactor in Arak.

Similarly, the unnamed officials said Iran “must come into compliance with its obligations under the NPT and its obligations to the IAEA [International Atomic Energy Agency].”

Those statements appeared to suggest that the administration would be insisting on a complete end to all enrichment, at least temporarily, and an end to all work on Arak.

The actual text of the agreement reached on Sunday states, however, that both the six powers of the P5+1 and Iran “will be responsible for conclusion and implementation of mutual near-term measures,” apparently referring to the measures necessary to bring Security Council consideration of the Iran nuclear issue to a conclusion.

The Obama administration has yet to release an official text of the “first step” agreement, although the official Iran Fars new agency released a text over the weekend.

Iran has demonstrated its determination to achieve such an agreement by effectively freezing and even partially reversing its nuclear programme while giving the IAEA daily access to Iran’s enrichment sites.

The Washington Post story on Sunday cited Western officials in Geneva as saying that the Iranian concessions “not only halt Iran’s nuclear advances but also make it virtually impossible for Tehran to build a nuclear weapon without being detected.”

But since the early secret contacts with Iran in August and September, the Obama administration has been revising its negotiating calculus in light of the apparent Iranian eagerness to get a deal.

In mid-October, Bloomberg’s Jeffrey Goldberg reported that the White House and State and Treasury departments were interested in an idea first proposed in early October by Mark Dubowitz, the executive director of the Foundation for the Defense of Democracies, who had lobbied the Obama administration successfully for the sanctions aimed at cutting Iranian oil export revenues.

The Dubowitz proposal was to allow Iran access to some of its own money that was sitting in frozen accounts abroad in return for “verified concessions” that would reduce Iranian nuclear capabilities.

Meanwhile the United States and other powers would maintain the entire structure of the sanctions regime, at least in the interim period, without any change, Goldberg reported, “barring something like total capitulation” by Iran.

The scheme would give greater rewards for dismantling all but a limited number of safeguards than for lesser concessions, according to Goldberg’s report, based on information from “several officials”.

And if Iran refused, the plan would call for even more punishing sanctions against Iran’s natural gas sector.

That was essentially the policy that the Obama administration adopted in the negotiations in Geneva. In the first step agreement, Iran agreed to stop all enrichment to 20 percent, reduce the existing 20 percent-enriched stockpile to zero, convert all low enriched uranium to a form that cannot be enriched to higher level and allow IAEA inspectors daily access to enrichment sites.

In return for concessions representing many of its key negotiating chips, Iran got no relief from sanctions and less than seven billion dollars in benefits, according to the official U.S. estimate.

But the Iranian concessions will hold only for six months, and Iran has made such far-reaching concessions before in negotiations on a preliminary that anticipated a later comprehensive agreement and then resumed the activities it had suspended.

In the Paris Agreement of Nov. 15, 2004 with the foreign ministers of the UK, Germany, France, Iran agreed “on a voluntary basis, to continue and extend an existing suspension of enrichment to include all enrichment related and reprocessing activities”.

That meant that Iran was giving up all work on the manufacture, assembly, installation and testing of centrifuges or their components. Supreme Leader Ayatollah Ali Khamenei was under the impression it was an open-ended suspension and initially opposed it.

Khamenei relented only after Hassan Rouhani, then the chief nuclear policy coordinator and now president, and other officials, assured him that it was a temporary measure that would endure only until an agreement was reached that legitimised Iran’s enrichment or the determination that the Europeans were not serious, according to Ambassador Hossein Mousavian’s nuclear memoirs.

After the Europeans refused to negotiate on an Iranian proposal for a comprehensive settlement in March 2005 that would have provided assurances against enrichment to weapons grade, Khamenei pulled the plug on the talks, and Iran ended its suspension of enrichment-related activities.

The United States had long depended on its dominant military power to wage “coercive diplomacy” with Tehran, with threat of an attack on Iran as its trump card. But during the George W. Bush administration, that threat begn to lose its credibility as it became clear that the U.S. military was opposed to war with Iran over its nuclear programme.

Obama administration officials are now acting as though they believe the sanctions represent a diplomatic trump card that is far more effective than the “military option” that it had been lost.

Some news stories on the “first step” agreement have referred to the possibility that the negotiations on the final settlement could stall, and the status quo might continue. But the remarks by senior U.S. officials suggest the administration may be hoping for precisely such an outcome.