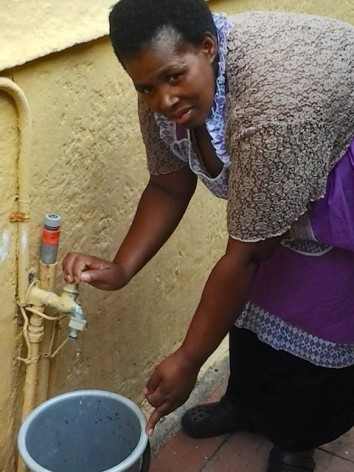 Queenie Magubane, 38, of Khayelitsha township in Cape Town, South Africa, uses a bucket to collect the water that constantly leaks from her outdoor tap. It is one of thousands of faulty taps across South Africa. Credit: Melany Bendix/IPS

CAPE TOWN, Feb 12 2014 (IPS) - The South African government’s earnest rush to provide water to millions of people post-apartheid may have jeopardised its attempts to provide services to the country in the long run.

South Africa is the 30th driest country in the world, yet it is one of the fastest-growing water consumers. According to the National Treasury’s 2012 Budget Review, demand for the scarce resource is increasing so rapidly that it is set to outstrip supply as early as 2030.

But this nation is in a race against time to plug the holes in its leaky water supply system, which is allowing so much of the crucial resource to drip away that the country’s water security is now at risk.

“Without water we cannot achieve our government’s priorities, such as infrastructure development and food security.” -- Rejoice Mabudafhasi, deputy minister of the DWEA

Jay Bhagwan, executive manager for water use and waste management  at the Water Research Commission (WRC), said that this water wastage was a natural result of the government having to quickly extend the water supply to a large majority of the country’s 51 million people post-democracy.

“After 1994 we had to give more than half the population access to water. This obviously put a lot of pressure on resources and capacity,” he told IPS.

“Maintenance just wasn’t a high priority and we are starting to see the consequences of that now.”

A 2013 WRC study revealed that South Africa is losing an average of 1.58 billion kilo-litres of water a year — the equivalent of 4.3 million swimming pools of water. The water wastage, attributed mostly to leaky pipes and theft, represents more than a third of all municipal water.

Kobus van Zyl, associate professor of hydraulic engineering at the University of Cape Town, whose speciality is water distribution systems, agreed that providing water to those who were denied this basic service under apartheid was a contributing factor to the current water woes.

But he argued that the mass exodus of engineers and project managers over the past 20 years was the key reason.

“The huge problem is that we’ve lost a lot of expertise, both on a local level in municipalities and at a national level within the Department of Water Affairs,” he told IPS.

“As a result there is a massive shortage of engineers and project managers, and you simply cannot manage a distribution system properly if you don’t have enough people with the necessary expertise to do so.”

Of the more than 230 municipalities in South Africa, 79 have no civil engineers or technicians and only 45 have civil engineers, according to a report by Allyson Lawless, a former president of the South African Institute of Civil Engineering.

To illustrate how extreme the situation is, Lawless’ report pointed out that there are more civil engineers serving the zoo infrastructure in Auckland, New Zealand, than in 86 percent of South Africa’s municipalities.

“Water is not just part of the economy, it is the lifeblood of our economy,” Christine Colvin, senior manager for the World Wide Fund for Nature’s freshwater programme in South Africa, told IPS.

“Expecting to maintain the economy and grow it without water is like expecting someone to carry on living after draining all the blood from their body.”

“Without water we cannot achieve our government’s priorities, such as infrastructure development and food security,” Mabudafhasi told IPS.

She added that water shortages would derail the government’s plans to deliver this basic service to hundreds of impoverished communities throughout South Africa, who still do not have access to clean, running water.

Van Zyl pointed out that South Africa’s poorest areas are likely to be hardest hit by water shortages.

“The drier parts of the country will be the first to experience shortages. These are commonly areas where the previous ‘homelands’ were established, which are still radically impoverished,” he said.

He added that “warning signs are now very clear in South Africa — demand will outstrip supply unless immediate action is taken.”

Her department has stepped up its War on Leaks project, which focuses on getting communities and municipalities to work together to report and fix leaks.

As to whether the DWEA’s efforts will ensure South Africa has enough water for the future, van Zyl said the initiatives are positive but more needed to be done in order to turn around the crisis.

“With what is currently being done, the best we can hope for is to plug a few holes. We need to do more because time’s running out.”