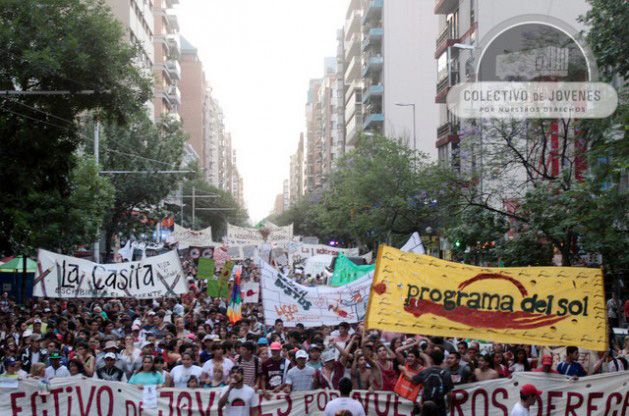 CÓRDOBA, Argentina, Mar 19 2014 (IPS) - Just being young, dark-skinned, poor, and wearing a hood or cap exposes you to arrest as a suspected offender in the Argentine province of Córdoba. Arbitrary police detentions are based on the misdemeanour of “loitering”, meant to prevent crime but in fact a violation of constitutional rights.

José María Luque, known as Bichi, has lost count of the number of times he has been detained by the police for these reasons in Córdoba, the capital of the province of the same name.

Luque is 28 years old and lives in a poor neighbourhood. He was first arrested when he was 13 and on his way home from school with a friend, dressed in school uniform. He was kept in custody for a week.

Codes of Misdemeanours, dealing with illegal conduct that does not amount to crime, exist in all of Argentina’s 23 provinces and in the City of Buenos Aires. In 33 percent of these jurisdictions, the police make arrests, investigate and enforce penalties, which contributes to abuses and human rights violations.

In 2003, the International Court of Human Rights convicted the Argentine state of the illegal detention in 1991 of 17-year-old Walter Bulacio at a concert in Buenos Aires, under its misdemeanour code. The young man died as a result of police brutality. The Court ordered the country to bring its internal laws in line with the American Convention on Human Rights and other international legislation.

The codes were mostly adopted under authoritarian regimes in the 20th century, but were updated when democracy returned. In the view of many human rights organisations, one of the related problems is that they are being quietly introduced into criminal law, which has national scope, establishing de facto provincial “minor crimes” rules.

Moreover, many of them are vague about the misdemeanours, which adds to their discretional nature, and they deny the right to a defence, to freedom of movement, to personal freedom, to due process and to be heard by the natural judge, that is, a competent authority determined by law, among other juridical and human rights anomalies.

“They stopped us, asked for our documents and arrested us. Just like that. They made up a criminal charge against me: attempted robbery and possession of a firearm. They let me go when the charges were dismissed,” he told IPS.

Now Luque is a member of the Colectivo de Jóvenes por Nuestros Derechos (Young People’s Collective for Our Rights), which fights police abuse. He says he is lucky because his family paid for a lawyer, and he has no criminal record.

But that is not what happens to many young people arrested under Cordoba’s Código de Faltas (Code of Misdemeanours), which came into force in 1994 and was reformed in 2007.

A study conducted by the National University of Córdoba and the Spanish University of La Rioja found that 95 percent of people detained under the Code of Misdemeanours do not have access to a lawyer.

“If you have a misdemeanour on your police record, you cannot get a certificate of good conduct, which most companies require in order to hire an employee,” Luque said.

The code penalises behaviours that supposedly harm civil coexistence, such as disturbing the peace in a public place, not providing proof of identity, resistance to authority, drunkenness, begging or vagrancy.

Article 98 of the code establishes fines or up to five days imprisonment for those who hang around vehicles or urban or rural buildings “with a suspicious appearance or without a proper reason, causing disquiet among proprietors, residents, passersby or neighbours.”

“It’s a completely subjective and arbitrary rule. There is no explanation of what to do in order not to arouse suspicion and be arrested,” said Luque, who has worked since he was a teenager and is now a master pizza maker.

Bichi and other young people of similar social extraction tend to wear particular garments that identify them: coloured hats or caps, jogging pants and flashy trainers.

But the police interpret these cultural identifiers as a presumption of guilt.

“Many of those arrested wear hats. Hats are suspect,” said Luque, one of the organisers of La Marcha de la Gorra (March of Hats), which has taken place every November for the past seven years to demand the repeal of the Code of Misdemeanours. In 2013, 15,000 people took part.

“Whatever they say, the loitering rule is used so that the police can arrest darker-skinned people from the shanty towns who are wandering around wearing hats,” lawyer Claudio Orosz, the representative in Córdoba of the human rights organisation Centro de Estudios Legales y Sociales (Centre for Legal and Social Studies), told IPS.

In Orosz’s view, the code is a reflection of a “conservative and timorous” society that has inherited the “repression and genocide” of the 1976-1983 Argentine dictatorship.

This prosecution lawyer for crimes against humanity said that the culture is the reason why the poor are subjected to the “Kafkaesque labyrinth” of loitering rules.

According to the university study, people arrested for misdemeanours are mainly underprivileged young people aged 18 to 25. In 2011, 73,000 people were detained in the province, 43,000 of them in the city of Córdoba.

“It’s the usual thing: if you come from a poor area and you are poor, you dress in a certain way, you have certain features and a certain skin colour, then you are automatically considered a danger to society,” said Luque.

One of the most questionable aspects of the code is that powers that should be reserved for judges are handed over to police superintendents.

This is ironic because the Cordoban police “structure and support the major crime problems that cause most damage to society,” such as “human trafficking, drug trafficking, car theft and arms sales,” said Agustín Sposato, another member of the youth collective.

Aggravating circumstances, according to Orosz, are the unreliable systems for fingerprinting and carrying out police record searches in Cordoban police stations.

“Sometimes they take three days to find out if whether the detainee has a record and to release them, which is really illegitimate deprivation of freedom,” he said.

“It’s a system of social control, formalised by the police, that undermines the basic checks and balances of constitutional law,” he said.

In Orosz’s view, “the Code of Misdemeanours gives enormous power of selectivity and social control to the police, without the proper judicial control.”

Luque is well aware of the fact. “The times I was detained, I experienced that sense of illegitimate deprivation of freedom, of being kidnapped, of not knowing when I was going to get out, of not knowing how to let my loved ones know where I was. The impotence was very great, very dark, very ugly,” he said.

The governor of Córdoba, José Manuel De la Sota, on Feb.1 sent a bill to reform the Code of Misdemeanours to the provincial parliament, where it is being debated.

In the view of Sergio Busso, the leader of the parliamentary party for the ruling Unión Por Córdoba, the rule on loitering should be preserved because it is important in the fight against rising public insecurity in the province.

Busso told IPS that the code “is an instrument to regulate and punish illegal behaviours that harm the rights of individuals or of society as a whole, but that do not amount to crimes.”

But he admitted the code needs to be reformed, so that “arrests and fines may be applied only in special situations, and are replaced instead by alternative and secondary penalties, such as community service.”

He also said the enforcing authority should be changed. The new bill provides for specialist prosecutors or judges to decide misdemeanour cases, rather than police, “in order to separate those who judge from those who execute procedures,” and to ensure “an independent view.”

According to Orosz, this has already been tried, and it failed because the justice system collapsed under the avalanche of cases.

Busso said the reform bill requires loitering to be the subject of a complaint by an identified citizen. But Orosz said such a complainant would be “equally subjective.”

In Orosz’s view, the Code of Misdemeanours should be repealed and replaced by a code of coexistence establishing “the desired behaviours, and conflict resolution mechanisms that do not necessarily involve jail time,” like community mediation programmes.

Sposato, for his part, said the proposed reforms “are just window dressing, to ease the climate of social conflict” in the province.

“What is at stake is people’s lives, their rights, and the possibility of equality for all of us in the province,” he concluded.