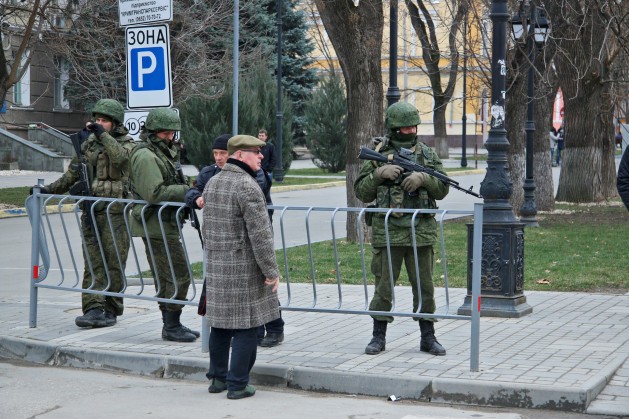 KIEV, Mar 4 2014 (IPS) - Crimea could remain under Russian control indefinitely as the current crisis – described by some politicians as Europe’s gravest since the end of the Cold War – threatens to turn into a “frozen conflict”, experts say.

The Ukrainian peninsula is now under de facto Russian military control with Ukrainian military bases surrounded, and control of infrastructure and strategic buildings across the region in the hands of Russian commanders.

And despite increasingly harsh rhetoric and threats of the strongest possible diplomatic action from U.S. and European leaders, many experts believe that there is little the West can do to loosen Moscow’s grip on the region.

Ian Bond, Director of Foreign Policy at the Centre for European Reform (CER) think tank in London, told IPS: “Unfortunately, things have got to the point where it looks that the best case scenario for the development of the present situation is that Russian troops end up staying in Crimea, the situation there will remain as it is now, and this becomes a ‘frozen conflict’.”

Crimea, today an autonomous republic in Ukraine, has long had close cultural ties with Russia. It is home to the majority of Ukraine’s ethnic Russians, many of whom came there during the forced repatriation of more than 200,000 Tartars – Turkic Muslims who lived in the region for centuries – in 1944.

They were sent to labour camps in Central Asia and replaced by Russians on the orders of Soviet dictator Josef Stalin who was angry at alleged collaboration between local Tartars and the Nazis during World War II. Tartars today make up a significant minority of Crimea’s population.

The Crimea was also part of Russia until 1954 when then Soviet leader Nikita Krushchev made it a part of Ukraine republic within the Soviet Union.

Russia has maintained a physical presence on the peninsula in the form of its massive naval base in the Black Sea port of Sevastopol, which it holds under a lease agreement with Kiev and which gives Russian troops the right to move around parts of Crimea.

The Euromaidan protests in Kiev, a series of protests through winter to demand closer integration with the EU, failed to gain support on the peninsula. As the revolution came to an end, calls for independence in Crimea grew louder, as did those for help from Moscow as clashes broke out among pro-Russian and pro-Kiev groups in some parts of eastern Ukraine.

The calls were answered by Moscow with the Kremlin claiming its troops were needed to protect Russian citizens. The troops, although not universally feted by locals, have not faced any aggression.

Locals in Crimea who spoke to IPS said that there was a wary peace in many towns and cities in the region and that the situation was far less tense than the media had been reporting.

Alexandr Yakushechkin, 45, from Simferopol, said: “Things here are actually quiet and peaceful. There are Russian soldiers only in front of two main administration buildings in Simferopol but nowhere else.”

He added that he did not expect Russian soldiers to stay in Crimea past a March 30 referendum on the country’s future status.

But others are already planning for the long-term presence of Russian soldiers and what that could mean for the economy in a region which relies heavily on tourism.

Gala Amarando, who works in the local tourist industry in Simferopol, told IPS: “People in Crimea live for the tourist season and they know things this summer may be complicated. They are already thinking of having to slash prices and ways to attract holidaymakers.”

With Moscow showing no signs of backing down on its intervention and moving more and more soldiers into the peninsula every day, some experts believe Russian troops could become a permanent presence, citing the 2008 invasion of the Georgian breakaway region of South Ossetia.

Georgia had tried to bring the region to heel with force but Moscow sent in troops amid claims that the people of South Ossetia were in danger. Georgia lost one-fifth of its territory in the ensuing battle and while the West imposed sanctions and Russia signed a ceasefire agreement saying it would withdraw troops, it never honoured it fully, and troops remained.

This raises questions over the effectiveness of any potential Western sanctions against Russia this time around.

The CER’s Bond told IPS: “What Russia learnt from the 2008 conflict in Georgia is that there were sanctions for a while and then they were forgotten fairly soon, and Barack Obama came into office and started to try and reset relations between Washington and Moscow.

“What Vladimir Putin may be thinking now is that if no blood is shed, the consequences may not be that bad, and the next U.S. president may try and reset relations with Moscow again. Perhaps Putin is thinking it is worth the risk.”

Some believe that targeted sanctions – particularly against the massive wealth of Russia’s ruling elite held abroad – may have some effect in making the Kremlin at least consider its position, others argue that Crimea will be used by Putin as collateral until he gets what he wants – a government that will have the support of all Ukrainian regions and honour previous deal he had made with Kiev.

Nikolai Sokov, a Senior Fellow at the Vienna Centre for Disarmament and Non-Proliferation (VCDNP), told IPS: “The only thing that can change his mind [about holding Crimea] is an effective government in Kiev that can hold the country together and stick to earlier agreements.”

However, there is a fear that Putin may, having successfully gained control of Crimea, try to intervene in other parts of East Ukraine where pro-Russian sentiment is also strong – with terrible consequences.

Support for Russia and its military is seen as far less clear cut in regions in East Ukraine outside Crimea, and armed conflict between Russian troops and either the Ukrainian army or paramilitary pro-western groups would be almost certain.

Bond told IPS: “While the best case scenario is a ‘frozen conflict’, the worst case scenario is that Putin intervenes in other parts of Ukraine. Then it would get really bad. The consequences of this, not just for Ukraine but the wider world as well, really do not even bear thinking about.”