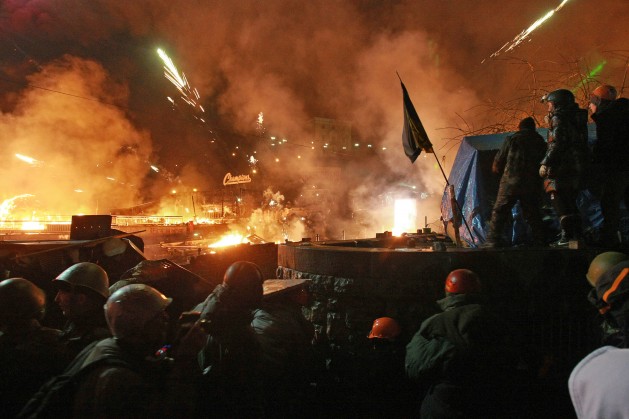 KIEV, Feb 19 2014 (IPS) - Bloody clashes that have left more than a score dead and more than a 1,000 injured in the Ukrainian capital could continue for weeks. Local people say there is now “no way back” for either side in what has become the worst crisis in the country’s post-Soviet history.

Protests began in Kiev at the end of November after President Viktor Yanukovych turned his back on a deal which would have seen Ukraine forge closer ties with the European Union and move towards eventual accession to the group.

“I know that all the hospitals in the country are emptying out non-essential patients and making room for the people that will be injured in these clashes."

They turned violent in mid-January after the passing of a set of controversial laws designed to stifle anti-government demonstrations and opposition movements.

There was some hope of progress at the start of this week when an amnesty was granted to hundreds of people detained during the protests and the government appeared to be considering concessions. But violence flared as Yanukovych pulled back on plans to agree the appointment of a new government or to have his own wide-ranging powers curtailed.

Protestors marched on parliament and ransacked buildings while security forces began firing on them.

As deadly battles raged and parts of the city became what residents told IPS are a “flaming battleground”, emergency meetings between opposition leaders and the government failed to produce any resolution, with each side blaming the other for causing the violence.

Protestors have told IPS that the death toll will rise in coming days, and that they see no end in sight to the bloody conflict.

Alexander Pyvovarov, a volunteer doctor who has been working at field hospitals set up near the main protest areas in Kiev, told IPS: “Things will escalate and get worse. I am expecting weeks more violence. People are really angry and there is no away back now for either side.

“I know that all the hospitals in the country are emptying out non-essential patients and making room for the people that will be injured in these clashes. Everyone knows what is coming.”

He added that the capital had been gripped by fear. “We’re all scared for our lives. We’re afraid this is going to be a massacre.”

The killings this week have been a turning point in the protests, according to many locals, some of whom had until now a neutral stance towards the protestors.

One Kiev resident, who asked not to be named, told IPS that he had closely watched the protests and seen “violent and stupid behaviour” from both the security forces and anti-government demonstrators.

But, he said: “Whether it is 25 killed or 125 killed, it doesn’t matter. The government has crossed a line and everyone is angry.”

Western leaders have condemned the violence and called on President Yanukovych to calm the situation. The EU is considering sanctions against Ukraine. And in what appeared to be co-ordinated statements earlier this week, both Kiev and the Russian foreign ministry blamed Western powers for fomenting the confrontation.

Ukraine has strong cultural and economic ties to Russia – a sixth of the population is ethnic Russian and another sixth speaks Russian as its first language.

Apparently alarmed by the protests, and in a bid to keep Kiev within its sphere of influence, Moscow agreed late last year on a vast package of financial and economic help for Ukraine. In January the government passed a series of controversial laws, some of which were modeled on existing Russian laws, which were seen by the international community as designed solely to muzzle anti-government dissent.

The close ties between Yanukovych’s regime and the Kremlin have fuelled rumours that Russian security forces were helping the local police.

There have also been reports in western media that the current crisis could split Ukraine, with one section moving towards even closer ties with Russia and the other looking towards Europe. President Yanukovych’s largest support base is in the eastern half of the country while the West is generally seen as more pro-European and anti-Russian.

However, many local people say this scenario is unlikely as there are no clear fault lines between populations in both parts of the country.

Although opposition leaders have, since the start of the protests, held meetings with foreign heads of state and EU officials to seek support, the Yanukovych regime appears resolute against any external involvement, even in the form of independent mediation, to end the crisis.

What is clear to many, however, is that the current situation needs to be resolved as soon as possible. Vladimir Onichenko, 47, a car mechanic from Kiev, told IPS: “The only way to solve the situation is for both sides to sit down for talks mediated by an independent body.

“What is happening at the moment cannot go on. Talking on the basis of the reality of what’s going on is the only way to stop this violence and the damage to the country.”