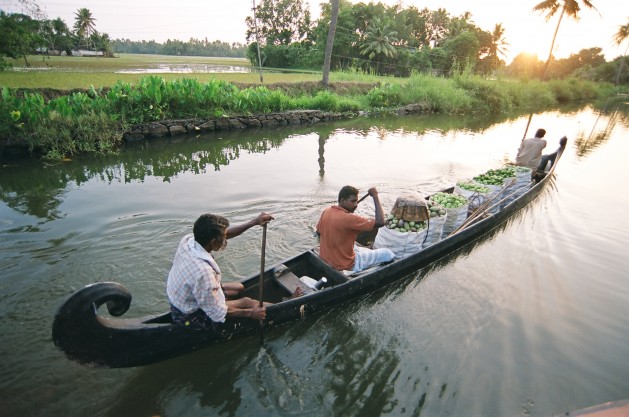 Vembanad lake in Kerala is the lifeline for over a million people. Credit: Samson Alapuzha/IPS.

ALAPPUZHA, (India), Mar 6 2014 (IPS) - Farming, tourism, poor fishing practices along with misdirected policies are muddying the famous backwaters of Kerala, one of India’s best known holiday destinations. Nowhere is this misuse more visible than in and around the 95-km-long Vembanad Lake.

Bearing the brunt are small fishing communities which are caught between dwindling fish catch, worsening water quality and the usurpation of banks – traditionally used as fish-landing points – by tourism operators.

The lack of a mix of saline and freshwater, vital to fish breeding, has affected fish species.

“Until about eight to 10 years ago, I would collect this amount in just two-three hours,” says fisherman Ashokan, pointing to a mound of black clams in his canoe-like boat. “Now I work the whole day to procure it,” he tells IPS.

Kerala’s backwaters, a tourist hotspot, are made up of a 1,500-km waterway network of canals, lagoons, lakes and rivers that run parallel to the Arabian Sea and are fed by both saline and fresh water, contributing to a unique ecosystem. Many areas in these wetlands are below sea level, allowing sea water to flow inwards.

Major towns and cities dot the backwaters, such as the historic port city of Alleppey, now called Alappuzha, where the Maharaja of Travancore oversaw the building of canal waterways in the 18th century.

At the heart of this entire ecosystem is the Vembanad wetland area, spread over 36,500 hectares and fed by six large rivers and seawater. It is a lifeline for over 1.6 million people living on the lake’s banks.

More than 150 species of fish are found in Vembanad Lake. The Horadandia atukorali fish is found only around Pathrimanal island in the lake. The ecological significance of Vembanad’s rich biodiversity has made it the country’s largest Ramsar site, meant to accord protection for conservation.

But being a Ramsar site has not brought any protection for Vembanad Lake so far.

The waters of the lake are now divided by the Thanneermukkom barrage, built in 1975 to shut out saltwater ingress into fields in a bid to promote double cropping of paddy in areas surrounding the lake.

The lake’s sea water ingress traditionally helped flush out waste while containing flood waters. The lack of a mix of saline and freshwater, vital to fish breeding, has affected fish species.

“Prawns spawn at the mouth of the estuary and baby shrimps are carried inwards into the lake with tidal sea waters, but they are now trapped, unable to flow inwards because of the barrage,” T.D. Jojo from the Ashoka Trust for Ecology and Environment (ATREE) tells IPS.

Chemicals from reclaimed farmlands, illegally discharged effluents from tourism houseboats and lakeside industries such as coconut husk retting have contributed to significant pollution in the lake.

The Thanneermukkom barrage, built on the narrowest part of the lake’s width, closes its gates each year from Dec. 15 to Mar. 31, and this has proved to be long enough to hamper fish breeding and also cause decomposition of nutrients in the lake.

As fishing stocks have decreased, fishermen have begun using methods that harm fishlings. Over-fishing is now a problem in Vembanad.

ATREE scientists have been working the last six years to conserve the ecology of the lake. “We now have 13 lake protection groups, trained to check water quality in the lake,” says Dr. Priyadarsanan Dharmarajan, team leader of the ATREE Vembanad conservation project.

Fishers, whose complaints on the lake’s deteriorating health were not taken seriously for years, now feel vindicated by data that shows low salinity and high acidity corresponding exactly to the shutting of the barrage gates.

“We want both saline and freshwater for farming and fishing, so we have asked for the barrage to be opened a little earlier,” says Murlidharan, member of a joint farmer-fishing forum and a fisherman for 30 years.

But the forum has small farmers whose voices are not heard by rich farming interests.

“Our primary concern is paddy. It is not possible to open the Thanneermukkom barrage a little earlier,” district collector N. Padmakumar, Alappuzha’s top administrative official, tells IPS. “The ratio of farmers to fishermen is 10 to one. Whose interest should I protect?”

He is also short of answers on the ecological degradation of Vembanad. “It (degradation) has happened historically. I don’t have a magic wand to make things right. There should be political will on the part of the government to do something.”

The resorts on the lake’s banks blame the houseboats for the pollution, but the houseboat owners deny this. “Houseboats don’t pose a problem for the lake,” says operator Dilip Kumar.

He also tries to sweep aside allegations of declining fish catch. “You can get prawns as big as this (pointing from his fingers down to his elbow) for 80 rupees (1.15 dollars) a kilogram,” he says.