KASARGOD, India, Apr 25 2011 (IPS) - Ajith, a nine-year old boy from Badiyadukka village in the southern Indian state of Kerala, waits patiently for his mother to return from the market and take him to the toilet. His bones are so deformed, he is totally immobile. 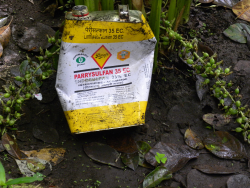 Endosulfan goes by another trade name, Parrysulfan, in this photo taken from a cardamom plantation in Idukki, Kerala. Endosulfan is banned in Kerala. Credit: K.S. Harikrishnan/IPS

In Periya, another village in the northern Kerala district of Kasargod, a woman waits for compensation from the government for her daughter Anjana, who was born with her bladder outside her body. “I have to be near her through the day and am unable to find work,” she said.

Ajith and Anjana are living victims of the spraying of the toxic pesticide endosulfan that has continued over two decades despite being banned in the cashew-growing hills and valleys of Kasargod, now a recognised name on the global pesticides map.

The issue of a global endosulfan ban is on the agenda at the fifth Conference of the Parties to the Stockholm Convention on Persistent Organic Pollutants, or “POPs Treaty”, which opened in Geneva Monday.

As the conference began, Kerala’s chief minister, V.S. Achuthanandan, led a mass action in the state demanding that the central government impose a national ban on endosulfan, a move already taken by 81 other countries.

The Kerala government is also busy trying to extract 86 million dollars in compensation from the central government to rehabilitate the victims, as recommended by the National Human Rights Commission (NHRC) on Dec. 31, 2010.

Rights activists say that amount is inadequate. Kummel Radhakrishnan, an activist at Hosdurg, a town near Kasargod, told IPS that the victims are not getting proper care. “Many affected families have been deprived of their breadwinner either by death or by desertion.”

Endosulfan poisoning started in the 1980s when the state-run Plantation Corporation of Kerala (PCK) began a thrice-a-year ritual of aerial spraying on close to 5,000 hectares of undulating, cashew-growing hills and valleys spread over a dozen villages.

The aerial spraying by PCK has claimed at least 9,000 victims in Kasargod district, said the Endosulfan Action Committee, an umbrella body representing nearly a dozen organisations working for the relief and rehabilitation of affected villagers. Of that total, the group says, 4,800 are bedridden and around one thousand have died.

The state government acknowledges that 486 people exposed to the pesticide have died so far and that some 3,000 people continue to suffer its debilitating effects.

Kerala and neighbouring Karnataka state have banned endosulfan, but manufacturers continue to market the chemical using different names such as “parrysulfan,” which is being sold through outlets to ordinary farmers. PCK itself no longer uses the pesticide.

The two states are pressing the central government for a national ban to prevent the cheap and popular pesticide from being smuggled in from other states.

But a pesticide lobby led by Central Agriculture Minister Sharad Pawar, who is also a powerful politician from Maharashtra state, is behind the move to delay the national ban.

Achuthanandan took issue with the fact that Prime Minister Manmohan Singh had not conceded to Kerala’s demand for a national ban. The Kerala chief minister said, “The Prime Minister should not use his office to promote the pesticide lobby like Minister Sharad Pawar.”

Several young mothers have had to resort to repeated abortions rather than risk giving birth to deformed children. It is common in Kasargod to find young men and women who look like children and children who look like stunted grandparents.

C. Jayakumar, director of Thanal, a leading environmental organisation based in Kasargod, told IPS that a house-to-house health survey in the Periya cashew plantation area revealed that health disorders were a major concern for all living there.

He said that a nationwide ban is needed for a total stop to the sale and export of the pesticide. “Regional banning will not have much effect. The state of Kerala has even banned the sale, but the use of endosulfan continues under different names,” he said.

No fewer than 16 studies have brought out the ill effects of endosulfan in India. One study conducted under the New Delhi-based Indian Council of Agricultural Research revealed a decline in the honeybee population in Idukki and Kasargod districts of Kerala, as a result of use of the pesticide.

S. Devanesan, professor and principal scientist at the Thiruvananthapuram-based College of Agriculture under the Kerala Agricultural University, said bees showed symptoms of poisoning and died a day after the spraying.

“Some bees visited flowers but became disoriented and were unable to return to their hives. The poisoned bees crawled around disrupting hive activity,” he told IPS.

Honeybees play an important role in pollinating flowering plants. They are the major pollinators in cardamom, coffee, coconut, cashew and vegetables like cucurbits and leguminous plants including peas and beans, all of which are grown in Kasargod.

Jayakumar and his fellow Thanal environmentalist Lakshmi Narasimhan said the decline of honeybees has disrupted tribal communities. “It affected the tribal Koragas who used to collect wild honey from the forests,” they said.

Experts pointed out that PCK ignored stipulations that aerial spraying of pesticides should be done very close to the canopy level or that the same pesticide should not be used continuously for a long time in any given area.

Dr. A. Achuthan, a scientist who studied the impact of endosulfan usage around villages in Kasargod, said the water and soil in the villages were severely contaminated. Furthermore, “the possibility of the bugs acquiring immunity because of long-term exposure was not considered.,” he added.

With so much scientific evidence weighing against endosulfan, NGOs led by the Endosulfan Spray Protest Action Committee in Kasargod are calling for criminal prosecution of people responsible for the human tragedy in the district.

“We are demanding proper compensation for the victims and criminal prosecution of those responsible for a preventable tragedy, whether they belong to the corporate world or are officials in the state or central government.,” said Masood Bovikkanam, a leader of the committee.