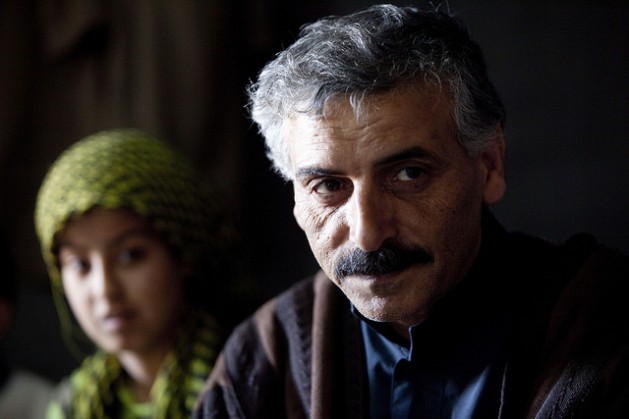 Calm and composed, Omar heads a family of seven in his tent at a refugee camp in Jordan, including his elderly mother, Samah. He used to be an Arabic language teacher back in Syria. Credit: EU Humanitarian Aid and Civil Protection

UNITED NATIONS, Mar 13 2014 (IPS) - As the protracted Syrian conflict enters its fourth year, there seems to be little or no hope of a resolution to the devastating crisis.

The death toll has now been estimated at more than 140,000, up from over 100,000 last March, claiming the lives of both rebel and security forces.

And according to U.N. figures released Tuesday, about 5.5 million children have been reduced to the status of refugees, the economy is in free fall, half of the total population of 22 million are living below poverty levels, about 2.5 million have lost their jobs and unemployment is estimated at 44 percent.

Still, the U.N. Security Council (UNSC) remains paralysed and unable to act – and will continue to remain so, since the United States and Russia are now bickering over a new divisive issue: the spreading crisis in Ukraine. 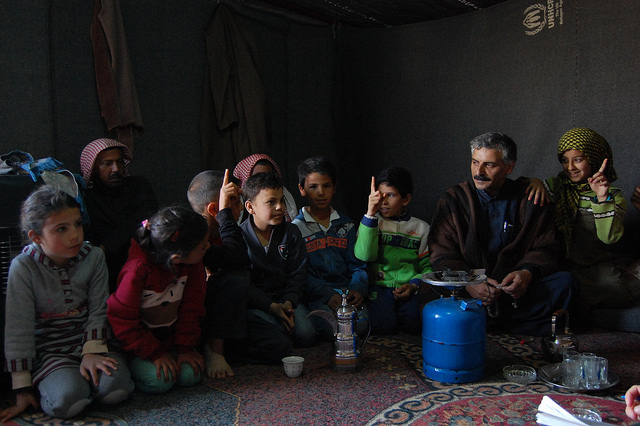 Three out of the eight children gathered in Omar’s tent said they were continuing their education. One reason for not attending school is the distance, they say, especially for those living in the outskirts of the village like Omar. Credit: EU Humanitarian Aid and Civil Protection

With Ukraine taking centre-stage, says one Third World diplomat, Syria has slipped from the negotiating table.

“The three years of deadly devastation in Syria may soon be a thing of the past – and perhaps forgotten,” he predicted, particularly if the big power confrontation over Ukraine continues to escalate.

Jose Luis Diaz, head of Amnesty International’s U.N. office, told IPS one measure of how outrageous the situation in Syria — and of the complicity of some countries in that tragedy — is that the most the UNSC has been able to achieve in three years is to call on the parties, and principally the Syrian government, to abide by the most basic responsibility.

And that responsibility, he said, “is not letting people die of hunger and lack of medical care.”

“We hope Russia and China are taking seriously the UNSC’s intention to ensure its recent resolution on humanitarian access is respected, including if necessary by agreeing further steps against parties that don’t comply,” Diaz added. 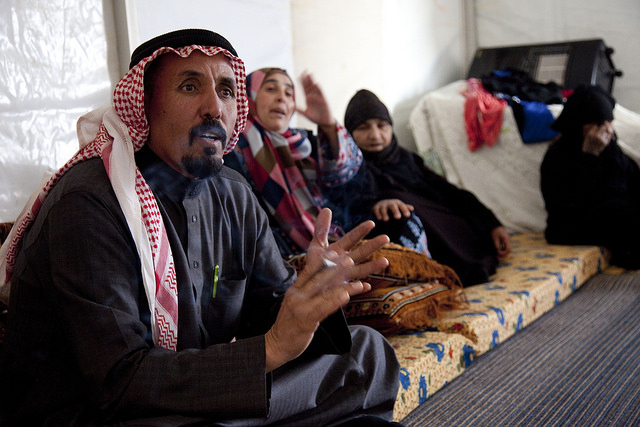 Mohammad, one of the Jordanians living in the village, has been trying to assist the incoming refugees. He says that most of the aid goes to the camp, with those living with host communities receiving a minimum, which however does include food vouchers distributed by the World Food Programme (WFP). Credit: EC/ECHO/A. Al Sukhni

In a hard-hitting statement Wednesday, Secretary-General Ban Ki-moon said three years ago, the Syrian people stood up in peaceful protest to demand their universal rights and freedoms.

“In response came brutal force, escalating bloodshed and the devastation of civil war,” he said.

Ban appealed to all warring parties to reflect upon the long and growing list of horrors taking place in Syria every day.

The secretary-general said he “deeply regrets the inability of the international community, the region and the Syrians themselves to put a stop to this appalling conflict.”

Ban specifically appealed to both the United States and Russia to help re-energise the virtually defunct peace process in Geneva.

Diaz of Amnesty International told IPS, “Just as important is that the UNSC follows through on its various statements, including in the latest resolution, that those responsible for violations of human rights and international humanitarian law will face justice.

“We continue to believe the Council should refer the situation in Syria to the prosecutor of the International Criminal Court (ICC).”

The Centre urged the UNSC to demand full implementation, by all parties in Syria, of resolution 2139 (demanding humanitarian access), including the cessation of attacks on civilians, lifting of sieges and facilitation of immediate humanitarian access to all areas of the country.

Additionally, it called for increased efforts to find a political solution to the conflict, including by engaging with all relevant regional powers.

Conscious of the deadlock in the UNSC, the Centre said: “Given the detrimental effects of UNSC division and inaction on Syria, we urge the permanent members of the Council (the United States, Britain, France, China and Russia) to commit to refrain from using the veto, in any case where crimes against humanity, war crimes, ethnic cleansing or genocide, are occurring.”