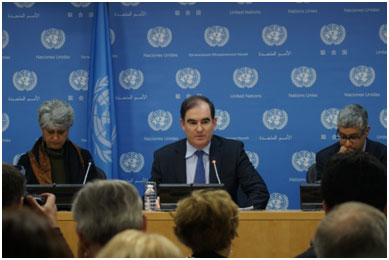 UNITED NATIONS, Mar 25 2014 (IPS) - Sudan and South Sudan represent two of the most serious and worsening humanitarian crises on the planet, yet U.N aid efforts in both countries are receiving dramatically less funding and attention than is necessary, according to a senior U.N official.

“We know there is a huge amount of demand on countries to be generous, but we need to draw attention…to those who have the resources to understand and realise that the situation has become dramatically worse in both [Sudan and South Sudan], needing a much larger and much more generous response,” John Ging, Director of the Operational Division at the U.N. Office for the Coordination of Humanitarian Affairs (OCHA), told reporters Tuesday.

U.N. agencies believe the deepening financial plight of the crisis in Sudan, specifically Darfur, is dramatic and urgent.

“In 2011, we had about 65 percent of our appeal funded, in 2013 that was down to 57 percent, and this year it’s alarming because we only have three percent of the 995 million dollars that we have requested,” Ging noted. “There is a very urgent need to mobilise funding for this crisis.”

Approximately 6.1 million people are in need of humanitarian assistance in Darfur, which represents a 40 percent increase from this time last year, the U.N. reported. Furthermore, violence in Sudan has displaced an additional 200,000 this year, adding to the roughly 400,000 internally displaced people (IDPs) through 2013.

“Its quite shocking for us to see a region of the world that used to be very central to global attention has fallen off…while the situation has deteriorated.”

“The fact that we are not getting the funding that is required…is going to [effect] children in Sudan,” said Yasmin Ali Haque, Deputy Director for the Office of Emergency at the U.N. Children’s Fund (UNICEF). “The basic services that had been arranged [in IDP camps], because of the funding situation, are not available to all children.”

With 25 percent of the almost 1.3 billion dollar request funded, South Sudan is in a better financial position than Sudan, stated Ging. “But we are in a race against time. With the rainy season fast approaching we have to preposition stocks…we really do appeal to our donor community to give us the funding that we need.”

There is also a distinct link between the need for a successful political peace process in South Sudan and managing the financial burden of meeting the humanitarian needs in the country, Haque explained.

“The timing is crucial, we need the talks [in Addis Ababa] to come to a positive outcome. The rains have started. We have people who are displaced, risking not being accessed. It means that our humanitarian operations are going to be come much more expensive, as we’ll have resort to airlifts.”

Conflict “has severely disrupted hope that children had in South Sudan, and it’s really urgent that we make sure we have the funding and the services in place to meet their needs.”

Until 2011, when South Sudan gained independence from Sudan, the country had been embroiled in decades of civil war, since 2003 the Darfur region of Sudan has experienced almost constant conflict, and since December 2013 South Sudan has been torn by an internal armed struggle between the South Sudanese government an a faction of the military.

“Our requests are relatively modest, but they are nonetheless hundreds of millions of dollars,” stated Ging. “We appreciate that that is a large amount of money, but only to deliver very modest [life saving] support.”