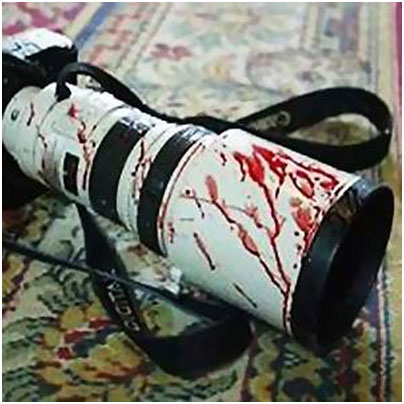 A blood-spattered camera in a Baghdad hotel. (AFP/Patrick Baz)

Calculated as a percentage of each country’s population, the Impunity Index shows the extent to which authorities lack the will to pursue justice for slain journalists.

The 2014 index examines cases of murdered journalists for the years 2004 through 2013 in which perpetrators went free from liability. Only countries with five or more cases are included on the index. This year’s list counted 13 countries, one more than last year.

For as long as the index has existed – six years – Iraq has been at the top of the list of nations where journalists’ murders go unpunished, with 100 percent impunity.

Despite two years of respite, a resurgence of militant groups caused the deaths of 10 journalists last year in Iraq, of which nine were targeted murders.

There has been only one case of a confirmed murder of a journalist in the 11 years following the 2003 U.S. invasion of Iraq, said Sherif Mansour, a Middle East and North Africa expert at CPJ, despite the fact that 13 journalists were killed as a result of their profession in 2003 alone.

The agency also made note of allegations that U.S. forces were behind deliberate media targeting, though these have not been proven, Mansour said.

This is not to say that before the war, Iraq was a country with a free press, Mansour told IPS; rather, “killing was not needed” because the political situation simply allowed no space for journalists to challenge the government in any way.

The index is yet another indicator that the rise of militant groups pose a particular threat to press freedom. CPJ reported that more than 40 percent of global suspected perpetrators of journalist murders are political groups, including armed factions, while 26 percent of those responsible are government and military officials.

This year, for the first time, Syria appeared among the top five countries with the worst record of impunity after Iraq, Somalia, the Philippines, and Sri Lanka, and right before Afghanistan. Syria had already been ranked as the most dangerous country for the media by a previous CPJ report.

According to the agency’s findings, the majority of those murdered covered politics, corruption, and war in their home countries.

The issue of impunity has received growing attention from the international community, in particular from the U.N. General Assembly, which adopted a resolution last November on ‘Safety of Journalists’, calling on states to end impunity.