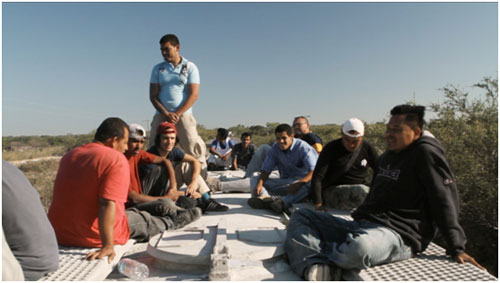 UNITED NATIONS, Apr 24 2014 (IPS) - Security enhancements on the U.S.-Mexico border reroute migrants into more perilous and dry areas, causing between 150 and 250 migrants to die in the desert every year.

A new documentary titled ‘Who is Dayani Cristal’ reminds us that more dangerous conditions do not deter migrants from embarking on the frightening journey from Latin America to the United States.

In the film, a Honduran elder describes the journey, safer a few generations ago, as a “decision about death”. Still, the undocumented immigrant population in the U.S. – the bulk of which is comprised of residents from Latin America – grew by 27 percent between 2000 and 2009, reaching 11.5 million in 2011.

The film, winner of the Sundance 2013 Cinematography award, tells of the dark work undertaken by workers at the Pima County Morgue in Arizona – trying to match missing persons with the bodies found around the border.

The story zeroes in on the peculiar case of a decomposing body found in the sun-blistered Arizona desert, 20 minutes away from the U.S. border and only identifiable by a tattoo on the chest that read, ‘Dayani Cristal’.

Like him, thousands of migrants have been reported missing in the last decade in that part of the Arizona desert that migrants call “the corridor of death”. The Pima County morgue has counted more than 2,000 bodies in the last decade, of which around 700 remain unidentified.

As the ‘Dayani Cristal’ investigation unfolds, actor and director Gael Garcia Bernal takes us from Central America to the United States, retracing what is for many migrants their final journey.

Martin Silver, who produced the film with Bernal, said in an interview with IPS that the ‘Dayani Cristal’ story captures the problem in microcosm, with a single unidentified skull in the desert acting as a mirror for the world’s inequalities.

Often treated as criminals by society as well as law enforcement personnel, migrants are humanised in the documentary, which also answers questions such as: what can bring someone on such a life-threatening journey?

Silver explains it is often a collision of many different factors, such as poverty and global trade rules that prohibit farmers in countries like Honduras from profiting off small-scale agriculture.

Migrants’ remittances, which enable their families to live in comfort that would otherwise have been impossible, add to the list of incentives.

Youth from the rural areas of major sending countries like Honduras, El Salvador and Guatemala feel especially compelled to move north the moment they realise that their most cherished possessions like cars, stereos and televisions are procured using remittances from relatives in the U.S, Silver told IPS.

The documentary’s director hopes the U.S. premier of the film will spark a more humane debate on what Bernal describes as “one of the main factors that has shaped the history of human kind and the planet: migration”.

As a morgue worker in the film pointed out: the sweat of this troubled workforce fuels the U.S. economy; it is time the American public woke up to the nightmare that undocumented immigrants live in.

A “Take Action” section on the documentary’s website allows those who want to engage in advocacy projects to do so by offering help at every stage of the migrants’ journey, starting from Honduran schools.