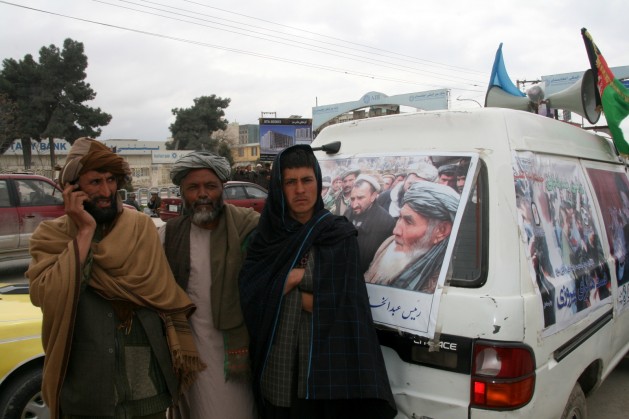 FAIZABAD, Afghanistan, Apr 4 2014 (IPS) - “If Abdullah will become president, the will of [the] Afghan people will be respected. Otherwise – especially if Zalmai Rassoul will be indicated as the winner – a new conflict will start and our country will become more insecure.” The remark by Abdullah Abdullah supporter Qazi Sadullah Abu Aman is typical of the uncertainties and accusations rising as election day draws close on Saturday.

Sitting in his two-storey house in Faizabad, the largest city in the northeastern Badakhshan province, Abu Aman says only a massive fraud in favour of Rassoul, the presidential candidate backed by outgoing President Hamid Karzai, can stop former foreign minister and prominent Tajik leader Abdullah winning.

"The Independent Election Commission is independent only in name. It knows the ways here, but does not act.” -- Dr Anisgul Akhgar, director of the Relation & Cooperation Women Organisation

Abu Aman is one of the most authoritative figures in the province, as former head of the Provincial Peace Council, the government institution that runs the peace process with armed opposition groups, and a former member of the Afghan Upper House (Meshrano Jirga).

Abu Aman is a member of Jamiat-e-Islami, the predominately Tajik Islamist political party founded in the 1970s by Burhanuddin Rabbani. This was one of the major Afghan mujahedeen parties that fought the Soviet occupation in the eighties. He is also a candidate for election to the council of Badakhshan, one of the 34 Afghan provinces whose representatives will be elected Apr. 5, simultaneously with a new president to succeed Karzai.

“People will vote for him [Abdullah Abdullah] because he was a mujahed [religious fighter] who bravely fought the Soviets, and because he understands the problems of ordinary people. He is the right man to replace Karzai, whose government is corrupt and was unable to provide a better life for Afghans,” Abu Aman tells IPS.

Karzai, he says, has “activated the governmental machine to help Rassoul.”

Just a few hundred metres from Abu Aman’s house is the provincial office for Rassoul’s campaign. The office is headed by Basiri Khaled, a former mujahed with huge appeal.

He admits that Abdullah is a strong competitor: “He is known by everybody, kids and old men – and when you go to the bazaar you buy the product you already know. This is true. But Zalmai Rassoul has more chances to win, due to his programmes: he has promised to build schools, hospitals, roads, and to create new jobs through the mineral sector.”

In 2009, Khaled had coordinated Abdullah’s campaign; now he is running Rasoul’s. He sees no incoherence here, and says he still is a member of the Jamiat-e-Islami: “I’m a Jamiati since I was a kid,” he tells IPS. “I was a strong commander, the first to push away the Soviets from Badakhshan. I have fought together with commandant Masoud [the iconic leader of the anti-Taliban Northern Alliance, killed in September 2011, whose portraits overlook the main buildings here]. Nobody can expel me from the party.”

As evidence of the strength of his preferred candidate, Khaled says “thousands of people took part in his rally here in Faizabad.”

That may not mean much. “All candidates spend a lot of money to bring a huge number of people to their gatherings,” says Samiullah Saihwn, who works for the local radio Bayan-e-Shamal. “They gave money to the local commanders, and to community and village leaders to ensure broader participation. So it’s hard to understand who really will get the votes.”

On Mar. 31, Saihwn chaired a debate with some of the provincial council candidates. Promoted by the Badakhshan Civil Society Forum (BCSF), the debate was vibrant and frank. Many of the 250 or so people gathered at the Setara-e-Shar wedding hall in the city fired some very blunt questions.

“We had organised something similar in the earlier elections,” BCSF director Saifuddin Sais tells IPS. “But this was the first debate in town for the 2014 elections. We also have promoted debates and seminars in five rural districts, reaching more than 1,000 people and explaining to them the electoral process and their rights.”

Despite the awareness programmes by the BCSF, the gap between Faizabad and the rural areas remains huge.

“In Faizabad people somehow know their political rights, they know they can choose whoever they want, but in districts they have no information, no idea of what is going on,” says Saihwn. “They just follow what a local mullah, a commander or a power broker tells them. Ability is not a criterion.”

Dr Anisgul Akhgar, director of the Relation & Cooperation Women Organisation (RCWO), agrees. “Here in the city I perceive a great will to vote. Here anyone is free to select any of the candidates. But in rural districts local power brokers collect voter cards or indicate the people who have to be voted for.”

She fears that the election may therefore be unfair. “No effective measures have been taken to prevent fraud and rigging. The Independent Election Commission [the institution that should manage all the electoral process] is independent only in name. It knows the ways here, but does not act.”

Despite such apprehensions, Akhgar, a women’s rights activist since the days of the Taliban regime, will vote. “I will use my constitutional rights and I am encouraging all the women I know to do the same,” she tells IPS.

“Through our awareness programmes we have spoken with more than 2,000 women. We have a registration centre here at our main office, and many women got their electoral cards here. According to our estimate, around 78,000 women in Faizabad – 44 percent of the total number – got it. We are particularly proud of this.”

The road to equal inclusion of women in politics is still long and difficult. “In many areas women are told who to vote for by their husbands. It’s a bad habits like this we are trying to dismiss. But more time is needed,” Hassam tells IPS.