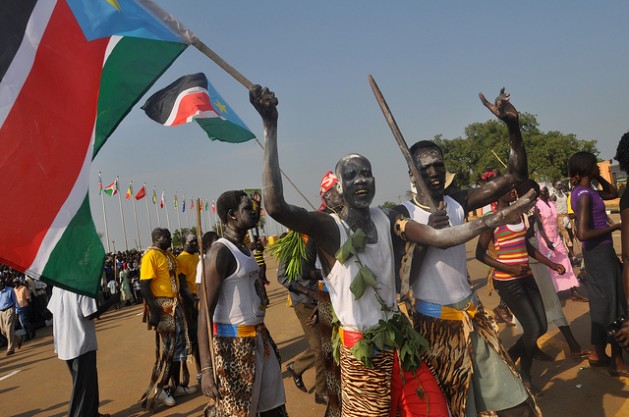 Traditional dancers during celebrations to mark South Sudan's first anniversary of independence on Jul. 9, 2012 in Juba. However, journalists say the government has stifled freedom of the media. Credit: Charlton Doki/IPS

JUBA, Apr 18 2014 (IPS) - As rebel forces loyal to South Sudan’s former vice president Riek Machar declared on Tuesday Apr. 15 that they had captured the key oil town of Bentiu, the government has been accused of clamping down on local media in an attempt to influence the reporting on the conflict.

Though journalists here say that the government clampdown first began after independence in 2011, the situation has worsened since December when fighting broke out between soldiers loyal to President Salva Kiir and Machar at military barracks in Juba, the country’s capital.

The conflict spread to other parts of South Sudan and resulted in the death of thousands and the displacement of some 863,000 people.

“We have recorded more than five cases of journalists being summoned for interrogation or being arrested and detained in Juba alone and more than 10 other cases in other parts of the country since the start of the conflict in December,” said Oliver Modi Philip, chairperson of the Union of Journalists of South Sudan (UJOSS).

“These people [in government] are telling our journalists to report in a certain way that favours the government. They don’t want voices of people in the opposition to be heard. But as a union we are telling journalists that they should stick to their ethics and ensure they have balanced stories,” Philip told IPS.

On Apr. 10, National Security Service (NSS) operatives confiscated copies of the Juba Monitor because the newspaper published an opinion piece profiling the life of former Minister of Environment Alfred Ladu Gore, who is allied to Machar.

And last month, on Mar. 18 NSS operatives confiscated copies of the same newspaper because the Juba Monitor published a story saying that rebels were planning to advance on the Jonglei state capital, Bor.

On that same day, the NSS confiscated the registration certificate of Eye Media, the proprietors of Eye Radio, a Juba-based radio station. The station is still on air but the clampdown began when one of their reporters, Nichola Mandil, who was reporting on the peace process in Addis Ababa, Ethiopia’s capital, was summoned by the NSS upon his return to Juba. Mandil and two of his colleagues were interrogated for two days because they station ran an interview with Gore who criticised Kiir, calling for him to step down.

Beatrice Murail, Eye Radio’s editor who approved the interview for broadcast, was forced to resign and leave South Sudan. She has since returned to her home country of France.

“The media environment has become really difficult. It is difficult to report anything fairly and in a balanced manner in this kind of environment,” Omiri told IPS.

“We are being forced to report only what pleases the government. I don’t know how we are going to work,” he added.

South Sudanese officials have insisted that journalists refer to last year’s outbreak of violence in Juba as a coup attempt.

Up to now a majority of reporters working for private media houses have referred to the incident as an “alleged coup” attempt as Machar denied allegations that he was trying to overthrow Kiir. Machar went into hiding in December and in February announced that he had formed a resistance group against the government.

“You should clearly say that it was a coup attempt led by Riek Machar,” South Sudan’s Information Minister Micheal Makuei Lueth told reporters last month during a press conference in Juba where local and a few international journalists were present.

Lueth, who is also the government’s spokesperson, warned local journalists not to interview rebels fighting his government or they would risk imprisonment.

“If you interview rebels and play such interviews here in South Sudan you are agitating [the population]. You are making hostile propaganda and for that matter we will take you where we take people who are in conflict with the law,” he had said.

“Go and do whatever you want to do outside South Sudan but we will not allow any journalist who is hostile to the government to continue to disseminate this poison to the people,” Lueth said.

Last November Lueth directed all journalists to register with the government. However, most media outlets refused to do so and the deadline expired in December.

In Wau, the capital of Western Bahr al Ghazal state, security officials have demanded that reporters ask for permission to cover stories.

Michael Atit a journalist with Voice of Hope radio, which is funded by the Catholic Diocese of Wau, was harassed by security officials last month.

“They told me that every time I want to work on a story I should first get permission from the national security. They also said after gathering audio I should bring it to them so they can decide if I can use it on the radio or not,” Atit told IPS.

Atit refused to abide by the police demands.

The intimidation of journalists is in contrast to South Sudan’s February 2013 agreement to become the first country to adopt a new United Nations-backed initiative aimed at creating a free and safe environment for journalists and media workers.

Edmond Yakani of local civil society organisation, Community Empowerment for Progress Organisation, criticised the government’s clampdown saying it would stifle the free growth of democracy in the country.

“People rely on the media for balanced information so they can make informed decisions. But this move by the government to stifle freedom of expression and speech, and freedom of the media is an attempt to feed us with rumours and one-sided information,” Yakani told IPS.

“At this critical time in our country it would be good for the government to allow the media to operate freely so that people can debate the issues affecting our country. It is only when you allow free speech that democracy can grow,” he added.

Meanwhile, Atit said that he and other journalists in Wau felt insecure because their movements were being monitored.

“I feel it’s not worth working as  journalist in Wau anymore,” Atit said, explaining that he was considering quitting.