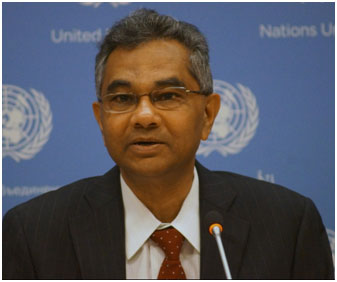 UNITED NATIONS, Apr 8 2014 (IPS) - In many countries across the world, the bite of a small insect can mean death. These vector borne diseases, the theme for the annual World Health Day (WHD) 2014, are deeply intertwined with many other developmental issues.

“They develop slowly…it does not capture the attention of world leaders, it impacts on the lives of the most vulnerable, the poorest of the poor, and it doesn’t kill in many instances. But it causes life long disabilities and stigma,” Dr. Jacob Kumaresan, Executive Director of the World Health Organisation (WHO) Office at the U.N., told reporters Monday.

In many cases, these diseases are spreading to areas where the disease was never present, states the WHO. This is due to an increase in the free movement of both people and trade and virus multiplication as a result of climate change and rising global temperatures.

“Dengue was always an urban disease, it was never a rural disease,” Kumaresan told IPS. It’s transmission is from people to people.

“If urbanisation is planned very well, with good infrastructure and good sanitation, [disease transfer] shouldn’t happen, but because there are so many slums and informal settlements, even in urban areas, this is the breeding ground. Then it goes back to rural areas,” he said.

Half of the world’s population is at risk from these diseases, one billion people are affected and a million people die each year, the U.N. reported.

“If you reduce disease transmission, fewer people get the disease, fewer people are affected, children have greater attention spans at school, learn better and study better, and at the end of their studies produce more for society as a whole,” explained Alan Court, Senior Advisor to the UN Secretary-General’s Special Envoy for ‘Financing the Health Millennium Development Goals and for Malaria’.

“There is a direct impact on the economies of the countries that are endemic, and this goes across those neglected tropical diseases.” “Were not just talking about health, were talking about a country’s economy and its development over time.”

Malaria has the propensity to rebound quickly once vector control initiatives are interrupted or ended, noted Ambassador António Gumende, Permanent Representative of Mozambique to the U.N.

“Mozambique is still facing an uphill challenge in the fight against malaria,” he said. But with serious political and resource commitment, progress can be made.

Vietnam has reduced the number of confirmed malaria cases by 90 percent between 1991 and 2012, and reduced malaria deaths by 99 percent in same period, stated Ambassador Le Hoai Trung, Permanent Representative of Vietnam to the U.N.

General improvement of the standard of living in Vietnam contributed to success, he continued. “Economic growth and socioeconomic development plays a very important role.”

“No country can fight [these diseases] alone,” stated Le, “a global partnership is needed.”