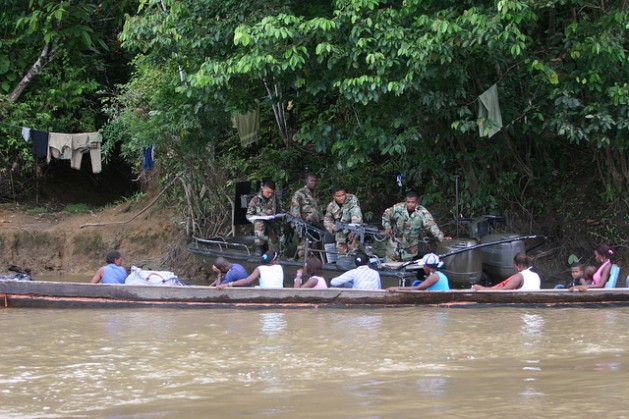 WASHINGTON, Apr 9 2014 (IPS) - Three years after Colombia agreed to U.S. demands to better protect labour rights and activists, a “Labour Plan of Action” (LPA) drawn up by the two nations is showing mixed results at best, according to U.S. officials and union and rights activists from both countries.

Pointing to continuing assassinations of union organisers, among other abuses, U.S. lawmakers and union leaders here are calling on President Barack Obama and Colombian President Juan Manuel Santos to do much more to ensure that the LPA achieves its aims.

“(V)iolence against trade unionists continues; in the three years since the Labour Action Plan was signed, 73 more trade unionists were murdered in Colombia. That alone is reason enough to say the Labour Action Plan has failed,” said Richard Trumka, the president of the biggest U.S. union confederation, the AFL-CIO, Monday in response to a new report by the Colombia’s National Labour School (ENS).

“In spite of numerous new labour laws and decrees, and hundreds of new labour inspectors not a single company fined by the Ministry of Labour for violating the law and workers’ rights has paid up, and companies still are violating worker rights in Colombia with impunity,” he added.

For years Colombia has been considered one of the most dangerous countries in the world for trade unionists, more than 3,000 of whom have been killed since the mid-1980s.

While Colombia has long been given preferential trade treatment by Washington as part of its broader “war against drugs” in the Andean region, the administration of President George W. Bush negotiated a free-trade agreement (FTA) with Colombian President Alvaro Uribe in 2006.

But the deal was strongly opposed by the AFL-CIO, labour and human rights-groups, and their allies in Congress who refused to ratify the FTA without provisions designed to substantially improve the country’s labour rights performance.

The pact was essentially put on ice until Obama and Santos signed what is formally known as the United States–Colombia Trade Promotion Agreement in April 2011 to which the Labor Action Plan (LAP) was attached.

The LAP — which, among other provisions, required the Colombian government to protect union leaders; enact legislation to ensure that workers could become direct employees instead of subcontractors; establish a new ministry of labour; and prosecute companies that prevent workers from organising — aimed to bring Colombia’s labour practices up to international standards.

While the original intention was to delay the FTA’s implementation until after the LAP’s conditions had been met, Congress approved the FTA in October 2011.

The activists insisted this week that the approval was premature in that it relieved the pressure on the Santos government to fully carry out the LAP.

“The approval of the FTA by the United States Congress, without verifying full compliance with the LAP, significantly reduced the political will behind the plan and contributed to decisively in turning the LAP into a new frustration for Colombian workers,” according to a joint statement issued Monday by Trumka and the leaders of two of Colombia’s trade union movements, the Confederation of Workers of Colombia (CTC) and the Union of Colombian Workers (CUT).

The statement, which also called for a “serious review” of the FTA’s impact on Colombia’s agricultural and industrial sectors and on its exports to the U.S., was also signed by more than a dozen other trade-union and human rights groups in the U.S. and Colombia.

For its part, the Office of the U.S. Trade Representative (USTR), which oversees the implementation of both the LAP and the FTA, gave the record of the past three years a more positive spin in its own report released Monday.

“Three years ago, the Colombian Labor Action Plan gave the United States and Colombia an important new framework, tools and processes to improve safety for union members and protections for labor rights. We have made meaningful progress to date, but this is a long-term effort and there is still work to be done,” USTR Michael Froman said.

The department’s report noted that 671 union members have been placed in a protection programme, which in 2013 had a nearly 200 million dollar budget; that more than 250 vehicles had been assigned assigned to union leaders and labour activists for full-time protection; and that the prosecutor general has assigned over 20 prosecutors to devote full-time to crimes against union members and activists, among other achievements.

It also noted that the number of union members who have been murdered for their organising activities has been reduced to an average of 26 per year since the LAP took effect from an annual average of nearly 100 in the decade before it.

“The action plan has been a good effort, and I know the government [in Bogota] has been taking it seriously,” said Michael Shifter, president of the Inter-American Dialogue (IAD), a hemispheric think tank.

“Of course, the activist groups are right to press harder for compliance and to hold both the U.S. and the Colombian governments to account on this, but the fact is that there has been progress and there should be more,” Shifter, a specialist on the Andean countries, told IPS.

In its report, the ENS concluded that the LAP had overall failed to produce meaningful results in protecting worker rights, including the right to be free from threats and violence or in prosecuting recent and past murders of trade union leaders.

“We would like to emphasize that thousands of workers and their trade union organizations have tried to make use of the new legal provisions that protect them against labor abuses, but mmost have found themselves more vulnerable since judges, prosecutors, and labor inspectors almost always refuse to provide the protection available under the new legal framework,” the ENS report concluded.

In many cases, it said, efforts to gain protection had “only backfired on workers,” particularly those working in ports and palm plantations.

ENS’s conclusions echoed those of a report released last October by U.S. Reps. George Miller and James McGovern, both of whom serve on the Congressional Monitoring Group on Labor Rights in Colombia.

“The ENS report reminds us that we have a very long way to go in successfully implementing the LAP and ensuring that workers can safely and freely exercise their fundamental rights,” the Group said, adding that the new U.S. ambassador to Colombia, Kevin Whitaker, make LAP’s implementation a priority and highlight illegal forms of hiring, the use of collective pacts by companies to thwart union organising, and the problem of impunity for anti-union activity.