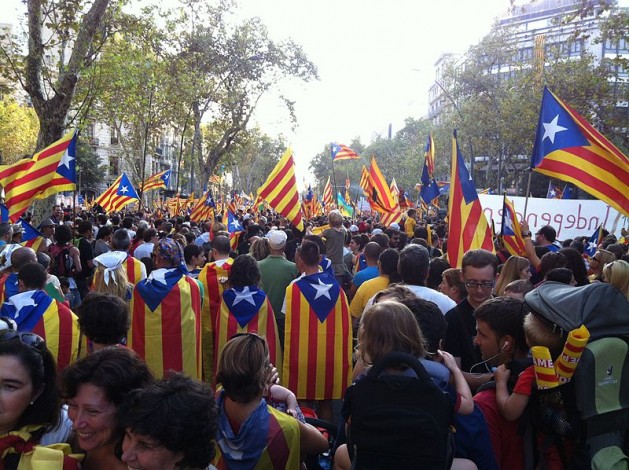 BARCELONA, May 24 2014 (IPS) - The debate on Catalonian efforts to become a sovereign state independent from Spain has become the centre of the otherwise tedious European Parliament elections campaign this month.

In December last year, the Barcelona-based regional Catalonian conservative government, the Generalitat, announced that it would carry out a referendum to decide whether Catalonia will remain part of the Spanish state, or declares independence. The local parliament has scheduled the referendum for November 9, 2014.

“Spain is undoubtedly a democracy … but it doesn’t have the same depth as British democracy” -- Artur Mas, President of Catalonia’s Generalitat
For the conservative central government in Madrid, such a referendum cannot take place because the national constitution does not foresee such popular consultations.

Catalonian independence activists argue that the region, Spain’s leading industrial cluster, pays too many taxes to the central budget, in exchange for low quality public services. Yet another argument in favour of independence is that the central government insists on imposing Castellan culture to the detriment of local traditions, in particular the use of the Catalonian language.

According to official 2014 figures, Catalonia is the fourth richest region in Spain, as measured by the gross domestic product (GDP) per capita. However, Catalonia pays the largest contribution to the Spanish central budget, only after Madrid. To make this imbalance worse, the region’s benefit is a relatively low investment from Madrid.

In 2010, for example, Catalonia contributed almost 62 billion Euros in taxes to the central budget, but only received public investments of over 45 billion, amounting to a deficit of 8.5 percent of the Catalonian GDP. This imbalancehas been growing since 2007.

As Elisanda Paluzie, professor of economics at the University of Barcelona, puts it, Catalonia feels like a “a cash cow (which) pay(s) Swedish-level taxes in exchange for sub-par public services.”

Artur Mas, president of the Generalitat, and leading political figure supporting the Nov 9 referendum, has called this fiscal imbalance “discriminatory, unfair, and arbitrary”.

In a document prepared by the Generalitat, and released in October last year, the Barcelona government estimated that the central government in Madrid owes more than nine billion Euros to Catalonia, as a consequence of its non-compliance with investment agreements with the Catalonian region.

Despite years of Catalonian efforts to obtain a new fixing of this ratio and of the central Spanish budget, or to legally give priority to Catalonian culture and traditions, in particular the use of the Catalan language, so far nothing has changed, in particular because the central authorities in Madrid have always rejected such proposals.

In 2010, the Madrid Constitutional Court invalidated 14 articles and established an official interpretation of 27 other declarations contained in the so-called Catalonian Statute, a sort of Catalonian constitution, which had been approved by the Catalonian parliament and by a popular referendum in 2006.

In particular, the Madrid court annulled a statute article calling the Catalonian language “the preferred” language in the region.

Even Socialist opposition leaders in Madrid reject the Catalonian claims. Joaquin Leguina, former president of the Madrid regional government, proposed paying “the nine billion Euro that Catalonia demands, on the condition that the Catalonian people shut their mug for ever.”

In other declarations, local leaders have called the Catalonian independence campaign “nationalist vomits”.

As the European Parliament elections campaign, being held May 22-25, reaches an end, Spanish political parties have seasoned their electoral efforts with insulting allusions to Catalonia. María Dolores Cospedal, secretary general of the conservative Popular Party (PP), which rules the central government in Madrid, accused Artur Mas of “fomenting hatred and national division with his lies and frauds.”

Mas replied: “Catalonian is a peace loving nation which only wants to vote and to listen” to the people’s will

For Catalonian people, such debates “only heat the tensions” already in place among Spain’s regions. Dani, owner of a small enterprise in Gracia, a popular district in Barcelona, complained that “it should be possible to discuss such a matter in a civilised democratic way, without exchanging insults.

Dani, who has relatives in Britain, said that he has been following the debates about the independence referendum in Scotland, scheduled for September 18. “People in England and in Scotland are exchanging the pros and cons on the question of Scottish independence, but they don’t call each other liars or dictators.”

“Nobody in England questions the right of Scottish people to decide,” Dani added. A popular Catalonian slogan in favour of the referendum says “In a democracy, it is normal to vote”, a reaction to Madrid’s rejection of the November referendum.

Artur Mas has also referred to these differences in public. In an interview, Mas said, “there’s a more profound democratic will in Britain than in Spain. I regret that because I would love to say that in Spain there is the same talent for democracy or the same feeling for democracy.”

“Spain is undoubtedly a democracy,” Mas added. “But it doesn’t have the same depth as British democracy.”

The Scottish and Catalonian quests for independence constitute a major challenge for the European Union because, if the separatists win, the body would have to decide whether it accepts the new states as members. In the Catalonian case, European authorities would also have to decide whether the new state may keep the Euro as its national currency.

For Catalonia, with strong trade links with the rest of Europe, a loss of such status would represent a substantial economic setback. Both Scottish and Catalonian independence activists have made it clear that they want the eventual new states to remain as members of the European Union.

So far, the authorities in Brussels have tried to avoid taking sides in the debates. But José Manuel Barroso, president of European Commission, warned Catalonia and Scotland alike that, in case they become independent states, they would have to leave the EU and ask to be re-admitted.

However, there is no legal cadre sustaining such position. As Artur Mas pointed out in the interview, “there are no precedents. In the EU treaties, and more precisely in the Lisbon Treaty, there’s no consideration of cases” such as the Catalonian and Scottish quests for independence.

Indeed, no European law-maker has ever considered the possibility that a region within an EU member state would declare independence from that state but ask to remain part of the body.

Mas noted that European authorities could not take away “the rights of citizenship held for many many years by Scottish citizens or Catalans; citizenship rights that can’t be annulled or swept aside overnight.”