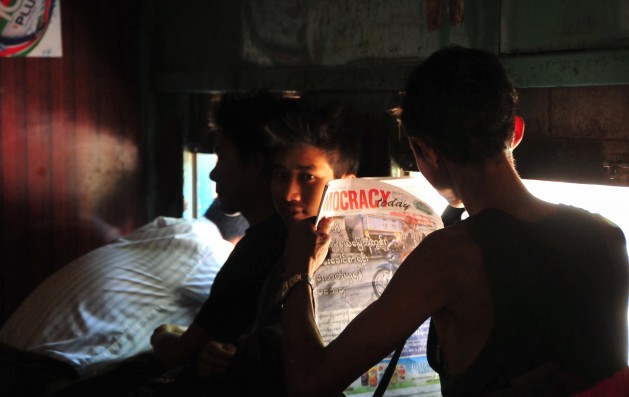 A commuter on the Circular Train in Yangon reads a copy of the newspaper Democracy Today. Credit: Amantha Perera/IPS.

YANGON, May 5 2014 (IPS) - Kyaw Kyaw Aung is just 22, but already has dark memories of days when information, sometimes of the mundane kind, could land you in a dark cell for a very long time in Myanmar, a Southeast Asian nation that was under military rule for decades.

“It is all different now, but there were days not so long ago when talking about the (opposition) National League for Democracy or just uttering the words ‘The Lady’ in public could send you to jail,” said Aung who works at Yangon’s main railway station. ‘The Lady’ is the nickname that ordinary Myanmar citizens use to refer to Nobel Peace laureate Aung San Suu Kyi.

Despite a highly competitive market, a dozen newspapers now hit the streets every day in Yangon.

It was in August 2012 that the army-backed but reformist Thein Sein government loosened decades of suppressive media laws, lifting pre-publication censorship. In April 2013, it also issued new licences for daily newspapers.

Despite a highly competitive market, a dozen newspapers now hit the streets every day in Yangon. Exiled media groups like the Irrawaddy, Mizzima and the Democratic Voice of Burma have all set up operations here.

“Now there is so much information and rumour that sometimes you need to read 10 different articles on the same incident to get the correct picture,” Aung told IPS, pointing to a newsstand at the railway station entrance lined with over a dozen daily newspapers.

Journalists and media watchers agree that the state of the media in Myanmar is in far better shape now than any time in the last half century.

“Journalists are not afraid to criticise,” Chit Win Maung, a member of the Myanmar Press Council said. Topics that had remained taboo, like the Nobel Laureate Suu Kyi, her political party, ethnic violence and corruption within government are readily reported today.

But activists like Maung are quick to hold back on their enthusiasm and not go overboard. “Media freedom and right to information are limited,” Maung told IPS.

The restrictions are multifarious – in the form of government pressure and restrictions, or business owners muzzling reporting, or ethnic tensions spilling into newsrooms. All these are amplified by a lack of professional capacity within the media brought on by decades of draconian censorship and isolation.

“Sometimes we feel like we miss censorship,” U Thiha Saw, who runs the English daily Myanmar Freedom told an audience of international journalists at a conference on media freedom in Yangon.

Despite its overall reformist agenda and engagement with the outside world, the Sein government has displayed signs of using old ways of dealing with the media.

In December 2013, a journalist from the Daily Eleven newspaper received a three-month jail sentence for trespassing and defamation. The reporter was investigating a corruption story. During the same month, four journalists from another newspaper, the Unity Journal, were detained while reporting on a chemical factory suspected to be linked to the government.

On Apr. 7, Zaw Pe, a journalist with the Democratic Voice of Burma, was sentenced to one year in prison for reporting a story on corruption in the education sector. The sentencing was based on a complaint by an education official that Pe trespassed on government property.

Pe had been jailed from 2010 to 2012 for filming without permission. Currently at least six journalists are in jail in Myanmar.

The government has also tried to muzzle foreign journalists, who have otherwise found entry relatively easy in the last two years. Following the reporting of an ethnic massacre in Maungdaw township in the restive western state of Rakhine in January, visa restrictions were imposed on at least one wire service. Its reporters found their visas limited to one month and put through lengthy renewal procedures.

“The government really put the squeeze on them. It made it clear that there was no carte blanche given to foreign correspondents,” a journalist with detailed knowledge of the incident told IPS.

Government spokesperson Ye Htut, however, denied any new restrictions. He said the government found that journalists who had applied for short reporting stints were using one-year multiple entry visas to stay longer. Htut said the government had come across over 100 such cases.

“We are revising our visa policy,” he said adding that wire services working in Myanmar did not face any restrictions.

Many say that with ethnic tensions rising, divisions are also beginning to show in the media.

“In the mainstream media, the ethnic voice is very low,” said Zin Linn, a consultant with Burma News International (BNI), a network of 12 news companies reporting on Myanmar, including those representing minority communities.

Linn said that the lopsided reporting was partly due to Yangon-based organisations lacking the resources to report from far-flung regions beset by ethnic tensions. But he also fears self-censorship as ethnic tensions have become a dominant factor in the upcoming 2015 national elections.

Government spokesperson Htut also acknowledged the crucial role the media would play in the national elections.

For those linked with the media, the fear is that pressures and lack of resources will force the media to renege on its role as an impartial observer at this critical juncture in Myanmar’s history.

Opposition leader Suu Kyi told a Yangon audience recently that one of the biggest drawbacks for the Myanmar media was lack of training for younger journalists.

Linn from BNI said one of the main tips he gives the BNI networks is to always double-check sourcing and not be swayed by unverified information floating around on social media.

He also warned that the media should be mindful of pressure coming from owners. He said governments all over the world routinely tried to get the media to toe their line by using financial and business incentives.

“Economic power and political power are two sides of the same coin,” he said.