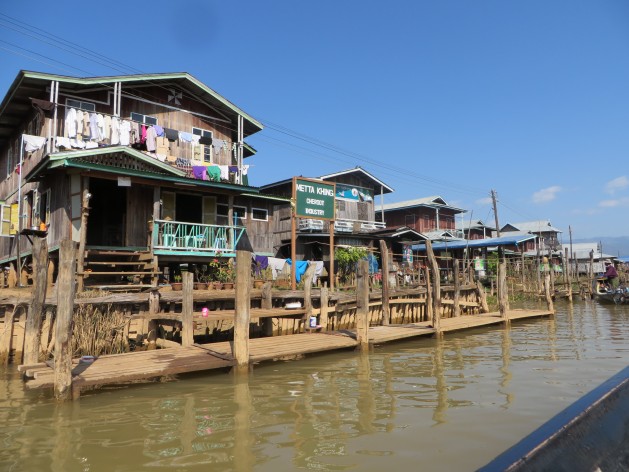 YANGON, Jan 17 2014 (IPS) - Myanmar is flinging open the gates to foreign investment, seen as key to the southeast Asian country’s future after decades of stagnation under military rule. From Coca-Cola and Unilever to Samsung and Fujitsu, the key brands of international companies can be seen hogging billboards.

International firms seem excited by the untapped potential of a country of 60 million, described by consultants McKinsey & Company as nestled in the world’s fastest-growing region.

But there are potholes on the way, experts say.

The key issue for some new entrants to Myanmar’s business scene seems to be access to land.

The Myanmar government is pushing laws related to investment, environment and labour standards through a “parliament that’s not well resourced,” Vicky Bowman, director of the Myanmar Centre for Responsible Business based in Yangon, told IPS.

“A lot of these laws are not being reformed transparently,” she said, noting that the government is essentially experiencing “teething problems”.

International investors will confront another troubling fact. Most Burmese companies “keep two sets of books” and are “not sure how much tax to pay,” she said. “Foreign partners are coming in and want to see five years of accounts.”

The country, moreover, has long operated in “a strong climate of corruption” that has seen the government awarding projects and real estate opportunities without a transparent tendering process, she said.

In 2013, Transparency International gave Myanmar a score of only 21 out of 100 in its public sector corruption index, with a low score indicating high levels of wrongdoing.

In moves so far, the fledgling administration of President Thein Sein has signalled its intention to join the Extractive Industries Transparency Initiative in a bid to show that the country’s mineral and energy supplies are being developed responsibly.

The key issue for some new entrants to Myanmar’s business scene seems to be access to land.

There remains “a lot of confusion around land,” said Bowman. Farmers who have lost their lands are demanding compensation according to market rates. Amid such controversy, international food manufacturers – for example those trying to source sugar from Myanmar – may face a legal challenge or consequences for their reputation, she warned.

Myanmar has experienced “well-reported protests” at gold and copper mines and “food-versus-energy” controversies, noted Lynn Thiesmeyer, vice president of the Yangon-based Environmental and Economic Research Institute of Myanmar, referring to the government’s offer of large tracts of food-producing land to energy companies.

Large-scale dams already built by China along the Salween River, as well as “projected issues” in the city of Sittwe, represent “not only food loss but also the loss of land, the only asset to which many of the rural poor have access,” Thiesmeyer told IPS.

Against this thorny backdrop, the Myanmar Centre for Responsible Business, funded by European donors, aims to help foreign companies with their market entry by raising issues with the government that international investors are uncomfortable to broach themselves.

The organisation also seeks to train local companies in business and human rights. Bowman’s group is developing assessments over the next two years on the tourism, oil and gas, agriculture, and information and communications technologies industries.

A handful of Western companies has taken the leap, promising a slew of benefits like jobs, agricultural development and health and hygiene programmes for children.

Activity in the energy sector has ramped up on the strength of vast oil and gas resources. The government recently announced international winners for a round of onshore oil and gas blocks offered for extraction. The awarding of bids, however, is contingent upon the companies carrying out environmental and social impact assessments within six months of signing contracts.

While the nascent democratic state has experienced problems with China in the oil and gas arena, opposition leader Aung San Suu Kyi told reporters in 2012 she would not persuade Western oil producers Chevron or Total to leave Myanmar. She described the latter as “sensitive to human rights and environmental issues.”

The tourism industry has also seen Western chains like the U.S.-based Best Western International and Accor of France open new hotels as the number of foreign visitors continues to rise.

Italian and German confectionary manufacturers Ferrero and Haribo last year announced their arrival in Myanmar. PepsiCo too signalled in 2013 that it would expand its existing business in the country.

Food and beverage giant Nestlé has secured permission to form a local business unit in Myanmar. However, spokeswoman Myat Thu Aye said the company is “at a very early stage of setting up” locally and it would be “premature to comment”.

Unilever, another big player, last May announced its re-entry to the country, including a new manufacturing facility and new headquarters in Yangon.

By far, it is Coca-Cola’s resurgence in Myanmar that has stood out. In 2013, the beverage-maker opened a bottling plant and announced an investment of 200 million dollars over the next four to five years, according to Rehan Khan, general manager of Coca-Cola Myanmar.

Beginning in 2009, the process involved a “broad review of the political and economic landscape, including market potential and key risk,” Khan told IPS.

The U.S.-based company discovered gender- and age-based biases at its business partner’s two bottling plants, which it then sought to rectify.

Coca-Cola expects to generate 22,000 jobs across the entire value chain, including 2,500 direct jobs, he added. The company’s flagship community initiative, Swan Yi, promoting financial literacy, entrepreneurship and business management for women, has empowered more than 15,000 women in the country since 2012, he said.

But despite several international players trying to forge a space in an exciting new market, for the most part, “big companies are few and far between,” noted Bowman. “It’s a myth to say people are rushing in here.

“We assume this is all going to settle down,” she said, but as of now, investors are put off by legal issues.”