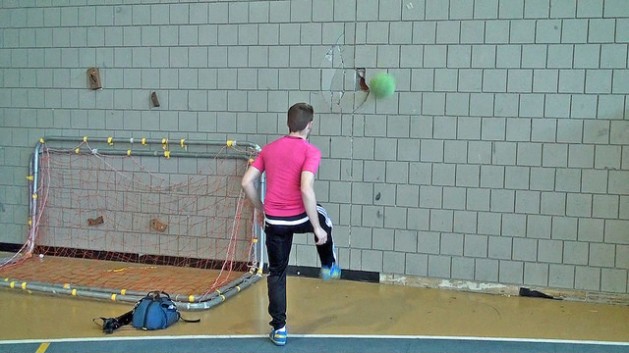 Every year, 65,000 undocumented youth like this star soccer player graduate from U.S. high schools. Brought to the country as children, and with immigration reform stalled in Washington, they are caught in limbo. Credit: Marcelo Brociner/IPS

SOMERVILLE, Massachusetts, May 6 2014 (IPS) - He did everything right. Worked hard. Excelled in school. Captain of his soccer team. He’s been scouted by a half-dozen colleges and universities.

“I had six goals and I had about 28 assists. My team went to the state finals,” the quiet 18-year-old explained.

“I wish more people saw what it’s like to see students who have worked so hard… and then slowly they realise that not a lot of doors are open." -- Anne Herzberg

But this star soccer player from Somerville High School isn’t necessarily headed to college. He doesn’t qualify for most grants or loans. He can’t even get the lower “in-state tuition” guaranteed for state residents at public institutions like the University of Massachusetts, a savings of 13,000 dollars per year.

The soccer player is undocumented.

“I’m not going to lie. I go to bed every night thinking about it,” he said. (His identity is being withheld to protect him and his family.)

“Sometimes my mom sees my crying and she asks why, but I don’t like talking about it. I don’t want to hurt my parents who have been working so hard.”

Every year, 65,000 undocumented youth like the soccer player graduate from U.S. high schools. Brought to the country as children, and with immigration reform stalled in Washington, they are caught in limbo.

Probably a dozen and perhaps even several dozen of the seniors at the public high school are undocumented in this city of 77,000, where one-third of the households speak a language other than English at home, and where some two-thirds of the student body is characterised as “minority.”

Because U.S. laws guarantee all children an education and prohibit school officials from asking children about their status, nobody knows exactly how many are undocumented. An estimated 11 million undocumented people currently live in the U.S.

School counselor Anne Herzberg, who helps students with college applications, sees far too many of them come through her doorway.

“One of the hardest things I see every year is kids who have done everything right in high school… [but] because of their status here they are unable to find a place that will accept them and give them the financial support that they need to be able to attend a four-year college,” she told IPS.

A four-year college or university in the U.S. can cost up to 60,000 dollars per year, including room and board, at private institutions. State schools cost about 15,000 to 23,000 dollars, with room and board, if a student qualifies for in-state tuition.

Some undocumented youth have options. Sixteen of the 50 US states offer in-state tuition rates to undocumented residents. But Massachusetts is not one of them.

Another option is the stopgap programme called Deferred Action for Childhood Arrivals or DACA. Instituted in 2012 by the U.S. Department of Homeland Security, it gives undocumented young people temporary working papers and the ability to qualify for in-state tuition and a few other programmes.

As of the end of 2013, a total of 610,694 people had received DACA status nationwide, 5,232 in Massachusetts, according to Homeland Security.

“Somerville does have a large number of students that do qualify for DACA,” Herzberg said, noting that she was aware of 10 current students who applied.

But, she added, “It is expensive.“ And, “for the students that I work with, the vast majority actually came after 2007.”

“I wish more people saw what it’s like to see students who have worked so hard… and then slowly they realise that not a lot of doors are open,” Herzberg noted. “As an immigrant myself and as a counselor, it’s hard for me to not to believe in the ‘American dream’ – that students can be here and be successful and work hard and achieve.”

Back in 2001, legislators proposed a stopgap measure: the Development, Relief, and Education for Alien Minors or DREAM Act. It was reintroduced in 2009. If passed, DREAM Act beneficiaries would get a shot at legal status if they attended college or served in the armed forces for at least two years. Afterwards, they would have a five-year waiting period before applying for Permanent Residence.

Between 800,000 and two million youth are eligible for the DREAM Act (depending on the calculations), some 27,000 in Massachusetts, according to the Center for American Progress’ count. The think tank calculates that passage of the law would add “$329 billion to the U.S. economy and create 1.4 million new jobs by 2030.”

But like other immigration legislation, the DREAM Act is stuck in the legislative deadlock that characterises what is probably the least efficient Congress in history.

Congressman Michael E. Capuano, a Democrat from Massachusetts, supports the DREAM Act “as a bridge to where we really want to be,” which is comprehensive immigration reform.

The congressman, who is of Italian and Irish descent, deplores the fact that so many young people are being held “hostage.” Congressman Michael E. Capuano (D-MA) points to his Italian grandfather’s U.S. citizenship papers from 1922. His grandfather, who came to the U.S. as an orphan at the age of 18, was 37 years old. Credit: Jane Regan/IPS

“Look, you can make an argument every day of the week about adults who may have come here illegally or usually stayed here illegally. I just don’t think it’s a valid part of the discussion to include children who really didn’t choose their lives,” he said. “They’re pending in limbo and I think… we’re wasting their future. I think it’s a terrible tragedy.”

School counselor Herzberg said she encourages her undocumented students not to give up.

“My advice to undocumented students who want to attend college is: ‘You can attend college and you need to fight for it,’” she said. “’Get involved in different organisations that fight for the rights of immigrants… The more that they do, the more chances that things will change for the better, whereas just sitting back is not going to change minds.”

The soccer player doesn’t know what he is going to do. If he and his family can scrape together the money, he may attend community college. Or he may head back to Brazil.

“I think good things happen to good people and I worked hard for myself, my success and my future,” he said. “I still have hope. Hope is the last thing that dies.”