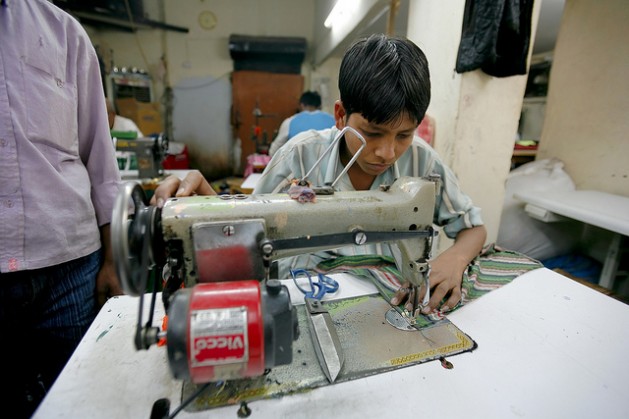 A child labours at a sweatshop in India. Credit: photo stock

UNITED NATIONS, Jun 24 2014 (IPS) - When the United Nations began negotiating a Code of Conduct for Transnational Corporations (TNCs) back in the 1970s, the proposal never got off the ground because of vigourous opposition both from the powerful business community and its Western allies.

But a move to resurrect this proposal – through the creation of a new international legally-binding treaty to hold TNCs accountable for human rights abuses – has been gathering momentum at the current session of the U.N. Human Rights Council (UNHRC) in Geneva, which concludes Friday.

Still, it has triggered the same political replay of the 1970s: strong opposition from business interests and Western nations, this time specifically the 28-member European Union (EU).

Jens Martens, director of the Global Policy Forum Europe, told IPS there is a heated debate in the UNHRC about establishing an intergovernmental working group to negotiate the proposed legally binding instrument on TNCs.

“So, the current discussion is not about the substance of a code of conduct or treaty but on the process,” he added.

There are currently two draft resolutions tabled at the UNHRC session in Geneva: one sponsored by Ecuador and South Africa asking the UNHRC to establish an intergovernmental working group: a proposal supported by developing nations of the Group of 77 (G77) and a coalition of more than 500 non-governmental organisations (NGOs).

A second draft resolution, sponsored by Norway, Russia, Argentina and Ghana, supports the existing working group on business and human rights and asks for extending its mandate by another three years: a draft also supported, among others, by the United States and the EU.

Martens, who co-authored a recent study on “Corporate Influence on the Business and Human Rights Agenda of the United Nations,” said “corporate actors have been extremely successful in implementing public relations strategies that have helped to present business enterprises as good corporate citizens.”

He said they have also given the impression of “seeking dialogue with governments, the United Nations and decent concerned stakeholders, and able to implement environment, social and human rights standards through voluntary Corporate Social Responsibility (CSR) initiatives.”

Martens said the U.N.’s much-ballyhooed Global Compact and the U.N.’s Guiding Principles on Business and Human Rights became prime examples of an allegedly pragmatic approach based on consensus, dialogue and partnership with the corporate sector in contrast to regulatory approaches to hold corporations accountable.

Alberto Villarreal, trade and investment campaigner at Friends of the Earth Uruguay, told IPS that by recognising environmental activism in all its expressions as a legitimate defence of human rights, “we can contribute to the struggle of environmental rights defenders and keep them safe.”

The London-based Global Exchange, an international human rights organisation, has put out a list of the “top 10 corporate criminals”, accusing them of being complicit in violations of human rights and the environment.

Anne van Schaik, accountable finance campaigner at Friends of the Earth Europe, said many countries support tabling a resolution for a binding treaty, but the EU has warned that if it gets adopted it will refuse to discuss it.

“The EU is therefore effectively boycotting the UNHRC and standing up for corporate interests instead of human rights,” she added.

Asked if there would be a decision at the current UNHRC session, Schaik told IPS, “We are unsure if this issue will be resolved on Friday.”

She said the EU’s “very obstructive approach” means it will not participate in the intergovernmental process of creating a treaty if the resolution is in fact adopted, “thereby effectively undermining the democratic decision-making process at the United Nations.”

Schaik said the Norwegian resolution states there should be a discussion on the issue of access to remedy, judicial and non-judicial, for victims of business-related human rights abuses on the agenda of the Forum of Businesses and Human Rights.

Effectively that means that at this week’s session, there will be a discussion, but there are no consequences or follow-up plans for what happens after that, she added.

Schaik said Ecuador proposes to “establish an open-ended intergovernmental working group with the mandate to elaborate an international legally binding instrument on Transnational Corporations and Other Business Enterprises with respect to human rights.”

This means there will be a new instrument which will state obligations for transnational companies, which is obviously much more far reaching than a discussion at a forum at the United Nations, she said.

The study on the human rights treaty, co-authored by Martens, focuses specifically on the responses by TNCs and their leading interest groups to the various U.N. initiatives, specifies the key actors and their objectives. It also highlights the interplay between business demands and the evolution of the regulatory debates at the United Nations.

The study provides an indication of the degree of influence that corporate actors exert and their ability, in cooperation with some powerful U.N. member states, to prevent international binding rules for TNCs at the United Nations.

Meanwhile, the Paris-based Reporters Without Borders has urged the UNHRC to promote the adoption of clear and binding rules on online surveillance and censorship.

“Businesses sell technology to authoritarian regimes that allows them to carry out large-scale online surveillance of their population,” the group said.

In a statement released this week, the Paris-based organisation said this technology has been, and still is, used in Libya, Egypt, Morocco and Ethiopia to arrest, imprison and torture.

The companies that provide this technology cannot claim to be unaware of this, it added.