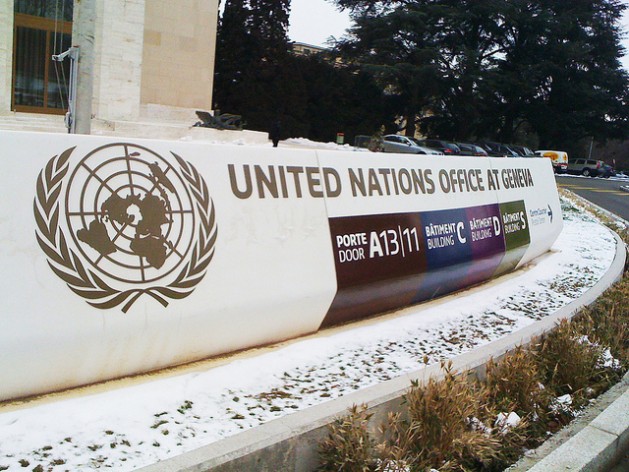 The U.N. Human Rights Council (HRC) is being urged to back a resolution next month to draw up a binding accord that would ensure both accountability and mechanisms for redress by victims of corporate rights abuse. Credit: Omid Memarian/IPS

WASHINGTON, May 7 2014 (IPS) - Some 500 global groups are calling for action by governments next month to jumpstart the process of drafting an international treaty to address rights abuses by multinational corporations, following on a related proposal by Ecuador and others.

On Wednesday, a global network of civil society groups known as the Treaty Alliance called on members of the U.N. Human Rights Council (HRC) to back a resolution next month to draw up a binding accord that would ensure both accountability and mechanisms for redress by victims of corporate rights abuse. The council will hold its 26th session Jun. 9-27 in Geneva.

"We believe there is no greater threat to human rights and democracy in the world today than unchecked corporate power.” -- David Pred

The Treaty Alliance’s joint statement, signed by more than 150 organisations and representing hundreds more, underscores “the need to enhance the international legal framework, including international remedies, applicable to State action to protect rights in the context of business operations, and mindful of the urgent need to ensure access to justice and remedy and reparations for victims of corporate human rights abuse.”

The alliance is urging the creation of a supra-national body to oversee any eventual treaty’s implementation.

“A system of binding rules to hold corporations legally liable for violations of human rights is an idea whose time has come,” David Pred, the managing director of Inclusive Development International, a watchdog group and member of the Treaty Alliance, told IPS.

“Transnational corporations have been literally getting away with murder for far too long, but rather than reining them in, our governments are ceding big businesses ever more power through free trade agreements and investment treaties. We have joined this call because we believe there is no greater threat to human rights and democracy in the world today than unchecked corporate power.”

For decades calls have been made for a strengthened international framework on corporate rights obligations and their redress. This movement has been partly successful, culminating in the 2011 endorsement by the U.N. HRC of what are known as the Guiding Principles on Business and Human Rights.

While seen as a major step forward by many, the Guiding Principles were hobbled from the beginning in that they are voluntary.

“Ultimately there are no means to ensure enforcement of the Guiding Principles, and what we’ve seen since 2011 is that the implementation of the Guiding Principles has not worked as a barrier to human rights violations by trans-national corporations,” Gonzalo Berron, an associate fellow at the Transnational Institute and a Treaty Alliance organiser, told IPS.

“We’re not saying that we don’t want the Guiding Principles to be applied and promoted – this is a parallel process, but we think that the sooner we start discussing a binding code the better. And now we have an opportunity to move forward with that.”

Indeed, advocates of a binding treaty say the current environment, in the lead-up to the HRC’s June session, is uniquely conducive.

“Before we’ve generally seen mobilisation among affected communities and specific NGOs, but for the first time you’re now seeing this huge alliance of different campaigns – this is something new at the international level,” Berron says.

This momentum can be traced to last September. At that time, during the HRC’s 24th session, a group of 85 countries put out a joint statement noting that the Guiding Principles are “only a partial answer” and emphasising “the necessity of moving forward towards a legally binding framework to regulate the work of transnational corporations”.

Supporters note that the letter constitutes the first time in decades that the issue has been initiated directly by U.N. member states.

“This more recent momentum stems from the will of the representatives of many countries in many regions, not by U.N. entities, which has greater democratic meaning and significance inside and outside the United Nations,” Dominic Renfrey, a programme officer with the International Network for Economic, Social and Cultural Rights, told IPS.

Member states sit on the HRC for three-year stints. Renfrey notes that the current composition of the 47-member council could be an advantage for supporters of a treaty push.

“At this moment a number of members of the Human Rights Council are states that understand better than most what the impact on their people is from poorly regulated development,” he says. “As such these states stand to benefit from an international system that better protects the human rights of their people, while ensuring a more sustainable and respectful form of investment.”

Still, the idea of a treaty isn’t being embraced by all parties, including strong supporters of strengthened corporate rights obligations and mechanisms for accountability and redress.

“While we are closely following these developments, we remain focused on the critical gaps that exist in ensuring that governments live up to their duty to protect human rights,” Amol Mehra, director of the International Corporate Accountability Roundtable, a global coalition, told IPS.

“Such gaps can be meaningfully addressed through regulation of corporations to prevent potential human rights violations both at home and abroad, and through strong remedial measures, including legal avenues of accountability, when harms do occur.”

Further, the leading figure behind the U.N. Guiding Principles has been urging caution in the push towards a treaty. In part, says John Ruggie, the U.N.’s special rapporteur on business and human rights, the problem is that the issues involved in corporate rights obligations are too vast for a single treaty.

Likewise, Ruggie wrote last week, there are some 80,000 multinational corporations in existence and millions of subsidiaries, and official reporting on these companies’ adherence to the treaty would be well beyond the capacity of most governments. Such concerns would be echoed for any supra-national body created to offer related oversight.

The fundamental problems of enforcement would be particularly exacerbated by governments’ hesitancy to prosecute for abuses committed outside of their territories – a significant problem given that treaties are consensus documents.

“Some UN human rights treaty bodies have urged the home states of multinationals to provide greater extraterritorial protection against corporate-related human rights abuses … But state conduct generally makes it clear that they do not regard this to be an acceptable means to address violations of the entire array of internationally recognized human rights.”