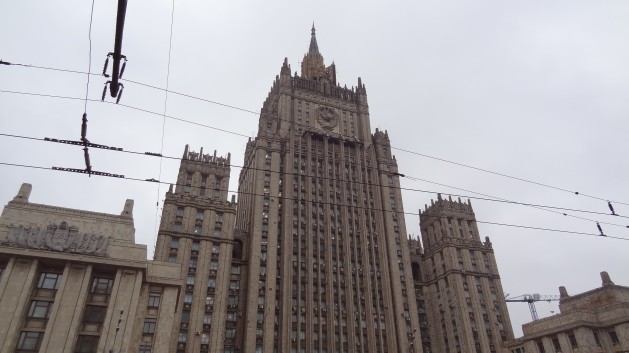 Russia may be looking for new overseas partners but the foreign ministry still looks its old self. Credit: Pavol Stracansky/IPS

MOSCOW, Jun 3 2014 (IPS) - Aleksander Mizdrakin is convinced he knows who Russia’s future international partners are – and they’re not in Europe, nor is the United States among them.

“Russia should have strong, reliable partners. Considering that the West has introduced sanctions it is very good that Russia has found partners such as China. And not only China. Why not India as well?” the 58-year-old Muscovite told IPS.

“I don’t say Russia should start a new Cold War with the European Union and the United States. However, by showing our capability to cooperate with others we are just showing the West that we are not alone.”

Boasts of growing economic cooperation [between Russia and China] also come against a backdrop of, on the surface, notably closer political ties between the two nations

Mizdrakin is far from the only Russian thinking the same way, and his thoughts chime with those of the Kremlin officials who in the last few weeks have been trumpeting Russia’s burgeoning relationship with China.

Just last month Moscow and Beijing signed a 400 billion dollar gas supply deal. At the same time it was reported that China’s 575 billion dollar sovereign wealth fund wanted to increase its investment in Russia, while the Kremlin said that both Russia and China were looking to use their own currencies more predominantly in trade deals.

The boasts of growing economic cooperation also come against a backdrop of, on the surface, notably closer political ties between the two nations. When Russia annexed Crimea earlier this year, China abstained in a U.N. Security Council vote on a motion declaring the referendum in the peninsula on joining Russia illegal.

Moscow claimed the move showed it had Beijing’s support and during a high-profile trip to Shanghai last month, Russian President Vladimir Putin spoke gushingly of China and its close relations with Russia, saying “Russia-China cooperation … has reached the highest level in all its centuries-long history.”

Russian media, much of which is de facto state-controlled, has since been filled with reports and editorials suggesting Moscow and Beijing could be about to form a new international bloc and reshape the existing world order.

But despite what many like Mizdrakin may think, that ordinary Russians will get any benefit out of a closer relationship with China is highly questionable.

Russia’s economy has been stuttering since the financial crisis and is locked in deep stagnation. Heavily reliant on resource-sale revenues, other more dynamic sectors remain woefully underdeveloped while the legacy of its Soviet planning – including the existence of subsidy-reliant one industry towns – has been hard to shake off.

The country has also struggled to attract investment with foreign companies citing rule of law problems, bureaucracy and corruption as major turn-offs to moving into Russia.

What prosperity there is is also highly concentrated. According to a report last year by investment bank Credit Suisse, Russia has the worst income inequality in the world, with 35 percent of all household wealth in the hands of 110 people.

And while the average wage in the country is nominally somewhere over the equivalent of 900 dollars per month, earnings vary considerably in regions and sectors and many ordinary Russians have a far lower wage.

According to Russia’s Federal State Statistics Service, 13 percent of the population live in poverty.

Experts say that these things are not going to change, no matter what trade links the Kremlin may or may not be developing with the East.

Ian Bond, director of foreign policy at the Centre for European Reform think tank in London, told IPS: “Chinese investment is not going to solve the fundamental problems of the Russian economy.

“Some changes would take decades of everyone working together to implement them, and in Russia that is not really going to happen.

“And at the same time, Russia will remain suspicious of any foreign investment, including that from China, in strategic areas of its economy.”

Popular support for the Kremlin and its policies, especially foreign policy, is generally high. The main source of news and information for the majority of Russians remains TV, almost all of which is directly or implicitly state-controlled.

When questioned, many say that closer ties to China are a good thing for Russia. But some admit that it is hard to see how exactly the economy, and they themselves, will benefit from it.

Yevgeny Seleznev, a 47-year-old from St. Petersburg, told IPS: “Take the recent gas contract – we won’t see what the results are of that for years to come. It’s the same with any Chinese investment into Russia, its effects won’t be clear for a long time. People are saying a lot at the moment … but I wouldn’t jump to any conclusions.”

The seemingly closer political ties between the two countries may also have their limits.

While human rights watchdogs in particular have been repeatedly dismayed by the two states’ reciprocal support at international level, for example in the U.N. Security Council over rights abuses in Syria, some experts say Beijing and Moscow have only supported each other when they have had something to gain from it themselves.

Bond told IPS: “I can see them cooperating still on common ground. What would be significant is if one or the other were to change their position on something simply to please the other, without it being in their specific interest. But I think it is questionable whether that is going to happen. I don’t see current events as the start of a Sino-Russian international bloc.”

Ironically, the annexation of Crimea may eventually prove to be a point that drives China and Russia apart, rather than together.

But for people like Mizdrakin, forging closer links with a fellow quasi-superpower ready to provide a bulwark against what many Russians increasingly perceive as an aggressive and unfriendly West, will only do Russia good.

He told IPS: “Russia having partners like China helps create a better balance in the world. [It shows] we are not against cooperation and peace. I think President Vladimir Putin manages that balance very well. He is not looking for conflict, but at the same time he is not afraid of standing up to anyone.”