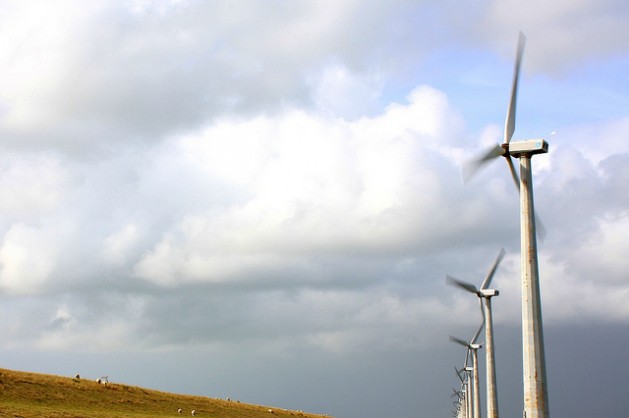 According to the U.S. government, only around 13 percent of domestic energy production last year was from renewable sources. Credit: Miriam Mannak/IPS

WASHINGTON, Jul 14 2014 (IPS) - Some of the largest companies in the United States have banded together to call for a substantial increase in the production of renewable electricity, as well as for more simplicity in purchasing large blocs of green energy.

A dozen U.S-based companies, most of which operate globally, say they want to significantly step up the amount of renewable energy they use, but warn that production levels remain too low and procurement remains too complex. The 12 companies have now put forward a set of principles aimed at helping to “facilitate progress on these challenges” and lead to a broader shift in the market.

“The problem these companies are seeing is that they’re paying too much, even though they know that cost-effective renewable energy is available." -- Marty Spitzer

“We would like our efforts to result in new renewable power generation,” the Corporate Renewable Energy Buyers’ Principles, released Friday, state. The companies note “our desire to promote new projects, ensure our purchases add new capacity to the system, and that we buy the most cost-competitive renewable energy products.”

The principles consist of six broad reforms, aimed at broadening and strengthening the renewable energy marketplace. Companies want more choice in their procurement options, greater cost competitiveness between renewable and traditional power sources, and “simplified processes, contracts and financing” around the long-term purchase of renewables.

These 12 companies combined have renewable energy consumption targets of more than eight million megawatt hours of energy through the end of this decade, according to organisers. Yet the new principles, meant to guide policy discussions, have come about due to frustration over the inability of the U.S. renewables market to keep up with spiking demand.

“The problem these companies are seeing is that they’re paying too much, even though they know that cost-effective renewable energy is available. These companies are used to having choices,” Marty Spitzer, director of U.S. climate policy at the World Wildlife Fund (WWF), a conservation and advocacy group that helped to spearhead the principles, told IPS.

WWF was joined in the initiative by the World Resources Institute and the Rocky Mountain Institute, both think tanks that focus on issues of energy and sustainability.

“The companies have also recognised that it’s often very difficult to procure renewables and bring them to their facilities,” Spitzer continues. “While most of them didn’t think of it this way at first, they’ve now realised that they have been experiencing a lot of the same problems.”

In recent years, nearly two-thirds of big U.S. businesses have created explicit policies around climate goals and renewable energy usage, according to WWF. While there is increasing political and public compunction behind these new policies, a primary goal remains simple cost-cutting and long-term efficiencies.

“A significant part of the value to us from renewable energy is the ability to lock in energy price certainty and avoid fuel price volatility,” the principles note.

In part due to political deadlock in Washington, particularly around issues of climate and energy, renewable production in the United States remains too low to keep up with this corporate demand. According to the U.S. government, only around 13 percent of domestic energy production last year was from renewable sources.

Accessing even that small portion of the market remains unwieldy.

“We know cost-competitive renewable energy exists but the problem is that it is way too difficult for most companies to buy,” Amy Hargroves, director of corporate responsibility and sustainability for Sprint, a telecommunications company, said in a statement.

“Very few companies have the knowledge and resources to purchase renewable energy given today’s very limited and complex options. Our hope is that by identifying the commonalities among large buyers, the principles will catalyse market changes that will help make renewables more affordable and accessible for all companies.”

One of the most far-reaching sustainability commitments has come from the world’s largest retailer, Walmart. A decade ago, the company set an “aspirational” goal for itself, to be supplied completely by renewable energy.

Last year, it created a more specific goal aimed at helping to grow the global market for renewables, pledging to drive the production or procurement of seven billion kilowatt hours of renewable energy globally by the end of 2020, a sixfold increase over 2010. (The company is also working to increase the energy efficiency of its stores by 20 percent over this timeframe.)

While the company has since become a leader in terms of installing solar and wind projects at its stores and properties, it has experienced frustrations in trying to make long-term bulk purchases of renewable electricity from U.S. utilities.

“The way we finance is important … cost-competitiveness is very important, as is access to longer-term contracts,” David Ozment, senior director of energy at Walmart, told IPS. “We like to use power-purchase agreements to finance our renewable energy projects, but currently only around half of the states in the U.S. allow for these arrangements.”

Given Walmart’s size and scale, Ozment says the company is regularly asked by suppliers, regulators and utilities about what it is looking for in power procurement. The new principles, he says, offer a strong answer, providing direction as well as flexibility for whatever compulsion is driving a particular company’s energy choices, whether “efficiency, conservation or greenhouse gas impact”.

“We’ve seen the price of solar drop dramatically over the past five years, and we hope our participation helped in that,” he says. “Now, these new principles will hopefully create the scale to continue to drop the cost of renewables and make them more affordable for everyone.”

Ozment is also clear that the new principles need not apply only to U.S. operations, noting that the principles “dovetail” with what Walmart is already doing internationally.

In an e-mail, a representative for Intel, the computer chip manufacturer, likewise told IPS that the company is “interested in promoting renewables markets in countries where we have significant operations … at a high level, the need to make renewables both more abundant and easier to access applies outside the U.S.”

For his part, WWF’s Spitzer says that just one of the principles is specific to the U.S. regulatory context.

“Many other countries have their own instruments on renewable production,” he says, “but five out of these six principles are relevant and perfectly appropriate internationally.”

Meanwhile, both the principles and their signatories remain open-ended. Spitzer says that just since Friday he’s heard from additional companies interested in adding their support.