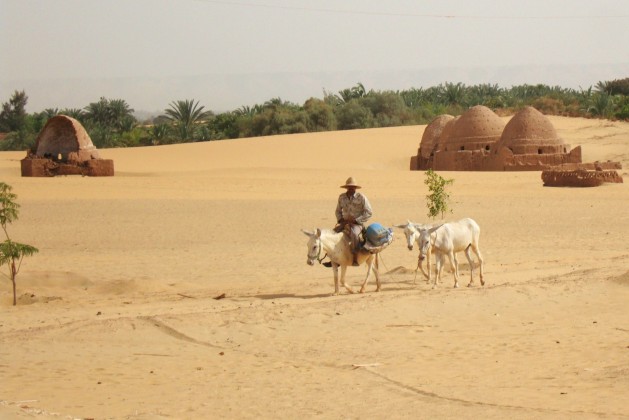 BAHARIYA OASIS, Egypt, Jul 12 2014 (IPS) - Using a hoe, farmer Atef Sayyid removes an earthen plug in an irrigation stream, allowing water to spill onto the parcel of land where he grows dates, olives and almonds.

Until recently, a natural spring exploited since Roman times supplied the iron-rich water that he uses for irrigation. But when the spring began to dry up in the 1990s, the government built a deep well to supplement its waning flow.

Today, a noisy diesel pump syphons water from over a kilometre below the ground. The steaming-hot water is diverted through a maze of earthen canals to irrigate the orchards and palm groves that lie below the dusty town of Bawiti, 300 kilometres southwest of Cairo.

“The deeper source means the water is hotter,” Sayyid explains. “The hot water damages the roots of the fruit trees. It also evaporates quicker, meaning we have to use more water to irrigate.”

Bahariya, the depression in which Bawiti is situated, is one of five major oases in Egypt’s Western Desert. While Egyptians living in the densely populated Nile River Valley and Delta depend on the Nile for their freshwater needs, communities in this remote and arid region rely entirely on underground sources.

“This [water drawn from the Nubian Sandstone Aquifer] is fossil water, which means it was deposited a very long time ago and is not being replenished. So once you pump the water out of the aquifer, it’s gone for good” – resource management specialist Richard Tutwiler

Since ancient times, freshwater has percolated through fissures in the bedrock, making agriculture possible in the otherwise inhospitable desert. Water was once so plentiful in the five oases that they were collectively known as a breadbasket of the Roman Empire on account of their intensive grain cultivation.

Ominously, where groundwater once flowed naturally or was tapped near the surface, farmers must now bore up to a kilometre underground, raising fears for the region’s sustainability.

“Historically, springs and artesian wells supplied all the water in the oases,” says Richard Tutwiler, a resource management specialist at the American University in Cairo. “But water pressure is dropping and increasingly it has to be pumped out, particularly as you go from south to north.”

The water is drawn from the Nubian Sandstone Aquifer, an underground reservoir of fossil water accumulated over tens of thousands of years when the Saharan region was less arid than it is today. The vast aquifer extends beneath much of Egypt, Libya, Sudan and Chad, and is estimated to hold 150,000 cubic kilometres of groundwater.

But it is a finite resource, says Tutwiler.

“This is fossil water, which means it was deposited a very long time ago and is not being replenished,” he told IPS. “So once you pump the water out of the aquifer, it’s gone for good.”

Extraction is intensifying in all of the countries that share the aquifer. In Egypt alone, an estimated 700 million cubic metres of water is pumped from deep wells each year.

The increase in water usage is the result of agricultural expansion and population growth. Nearly 2,000 square kilometres of desert land has been reclaimed by groundwater irrigation in the last 60 years. Farmers employ flood irrigation, a traditional technique in which half the water is lost to evaporation and ground seepage before reaching the crops.

Since the 1980s, government programmes aimed at alleviating population pressure on the Nile Valley have encouraged Egyptian families to relocate to the desert. Existing oasis communities have grown while new ones have sprung up around deep wells.

One of these settlements, Abu Minqar, was founded in 1987 and now boasts over 4,000 residents. The isolated community only exists because of its 15 wells, which draw groundwater from depths of up to 1,200 metres.

“Water management in (places like) Abu Minqar must be sustainable,” says Tutwiler. “Because if the wells dry up, it’s game over.”

The number of wells in the Western Desert has increased immensely since the first appearance of percussion drilling machinery 150 years ago. Records show that in 1960 there were less than 30 deep wells in all the oases – today there are nearly 3,000.

In Dakhla Oasis, 550 kilometres southwest of Cairo, natural springs and 900 wells provide water for the 80,000 inhabitants of the oasis, as well as orchards that produce date palms, citrus fruits and mulberries. This was traditionally one of Egypt’s most fertile oases because of the proximity of the aquifer to the surface – less than 100 metres throughout the depression.

But here, as elsewhere, water sources that flowed freely less than a generation ago now only flow with the aid of mechanical pumps. Groundwater extraction has exceeded 500,000 cubic metres a day and the water table is dropping, in some places by nearly two metres a year.

“There are too many straws in the same glass of water,” remarks hydrologist Maghawry Diab

While Diab estimates the Nubian Sandstone Aquifer may hold enough water to last the next 100 years, Egypt’s desert communities could have a lot less time.

Over-pumping has created localised “dry pockets” in the aquifer, which behaves more like a layered damp sponge than a pool of water. Tightly-spaced deep wells are drawing down the water table, while their overlapping well cones intercept upward flowing groundwater before it can recharge the shallower wells.

“All the wells are tapping the same larger cone of depression,” Diab told IPS. “To gain years, we’ll have to find even deeper groundwater sources or (come to terms with) using saline water.”

In an effort to reduce pressure on groundwater resources, Egypt’s government has set restrictions on the drilling of new wells and reduced the discharge rates of certain high-productive ones.

At government wells, a formalised system of water sharing is in place. But farmers thirsty for more water have drilled their own wells, concealing them from authorities or bribing local officials to turn a blind eye.

“We have tried to control the drilling, but there is a lot of resistance from farmers,” says one former irrigation ministry official. “Every time we capped (an unlicensed) well, two more would appear.”