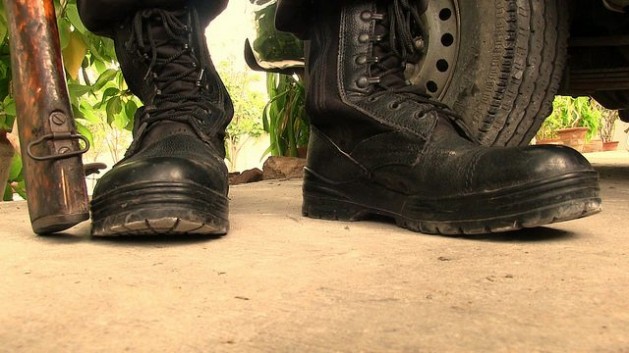 Some 300,000 private security guards are registered in Pakistan, with anywhere from 70,000 to 75,000 in the Sindh province alone. Credit: Zofeen Ebrahim/IPS

KARACHI, Aug 20 2014 (IPS) - With a rise in sectarian killings, extortion, drug peddling, kidnappings and land grabbing, Pakistan’s sprawling port city of Karachi, home to some 20 million people, has become a hotbed of crime.

Fearing that they may soon bear the brunt of this lawlessness, the city’s elite – often the target of kidnapping for ransom – has begun hiring personal bodyguards and moving through the streets in armoured or bombproof vehicles.

The result, experts say, is an increasingly dangerous city, where trigger-happy thugs operate with impunity, while an understaffed police force struggles to keep tabs on rampant crime.

A recent study carried out by the Sindh Province police indicates that the available strength of the police force in Karachi is just 26,847, of which 8,541 are deployed to protect individuals and sensitive installations like the port, airport and oil terminal, among others.

Some 3,102 policemen are assigned to investigation. Only 14,433 policemen, working on back-to-back shifts of 12 hours each, are responsible for maintaining law and order, and protecting the lives and properties of ordinary Karachi residents.

“There is blatant misuse of police in Karachi because of the persistent VIP culture that keeps officers from working in their respective police stations,” said Jameel Yusuf, former chief of the Citizens-Police Liaison Committee (CPLC), an organisation working closely with Karachi’s police force and the provincial government.

A dearth of state security coupled with a burgeoning demand for protection over the last two decades has created a huge market for private security companies.

Colonel Nisar Sarwar, former chairman of the All Pakistan Security Agencies Association (APSAA), told IPS there are currently approximately 300,000 registered private security guards in Pakistan, with anywhere from 70,000 to 75,000 in the Sindh province alone. Some 50,000 of these guards are based in Karachi, capital of the Sindh.

Of the 1,500 security agencies in the country, 300 are members of APSAA, but Sarwar said there were countless other private groups, complete with sophisticated weapons, that provide security to individual families.

Affluent consumers are willing to pay handsomely for their own safety. Various Pakistan media have reported that armouring and bulletproofing a 4X4 vehicle costs between 30,000 and 45,000 dollars.

A new bulletproof armoured vehicle costs some 150,000-170,000 dollars on the international market according to Pakistan Today, a princely sum in a country where 60.19 percent of the population lives on less than two dollars a day.

Despite a recent crackdown on crime – including the launch last September of a joint operation to cleanse the city of criminals, led by a paramilitary force called the Sindh Rangers – residents continue to be skeptical of official law enforcement.

CPLC Chief Ahmed Chinoy told IPS there has been a “50-percent reduction in various crimes” over the last year.

But Sarwar, who now heads Delta Security Management, one of the first security agencies set up back in 1988, said many wealthy families and individuals are continuously turning to private companies to protect them.

“There are some 20,000 banks in the city, as well as consulates, businessmen, factories […],” he told IPS. “How can we protect these without private security?”

Profiles of alleged criminals provided by the police portray a disturbing picture of the politicisation of crime in Karachi.

Private guards have been roped into this matrix, with security personnel themselves being implicated in several bank heists.

Others blame the escalation in crime on political interference in the police department.

“Give the police chief a three-year term [with] complete authority to steer his team, of course with due accountability, and see the difference,” Shah stated.

Frustrated with political involvement in the affairs of the police department, he himself remained in his post for just one year, from 2011 to 2012. He alleged that whichever government is in power appoints its preferred man as the “top cop” in order to sidestep certain legal regulations.

Given the dismal police-civilian ratio, CPLC’s former chief, Yusuf, believes that outsourcing certain tasks to private agencies will bring about a safer climate.

“The burden on the police will lessen if area-patrolling, protecting sensitive installations, and VIP duties can be carried out by private companies,” Yusuf said, adding that this would be cheaper than recruiting more personnel into the existing force.

It would also achieve the twin goal of providing employment and training for educated young people who have joined the ranks of Karachi’s jobless, he added.

Currently, he said, the average private security guard is “just a slightly more sophisticated ‘chowkidar’ (watchman) in uniform. He is undertrained, under-supervised and underpaid.”

According to APSAA’s Sarwar, guards are paid anywhere from 11,000 rupees (about 110 dollars, the minimum monthly wage as set by the government for a skilled worker) to 45,000 rupees (about 450 dollars) for armed guards. Two-thirds of their pay goes directly to the agency as a commission.

“They hardly receive any training,” Shah said, “and their weapons, if they are licensed to carry them, are outmoded. Some of them double up as peons, taking files from one desk to another and bringing meals to the office staff.”

APSAA runs two training institutes, one in Karachi and the other in the eastern city of Lahore in the Punjab province, which offer new recruits a three-day programme during which retired army personnel instruct them in basic self-defence and assembling of weapons.

Still, experts like Sarwar believe that trainings will be inadequate unless guards are equipped with the necessary weapons to deal with the militarism that grips Karachi’s streets.

“The agencies are not permitted to provide their guards with automatic weapons, and they are only allowed to fire in defence or if they are fired upon first,” he informed IPS.

“I am personally not in favour of weapons, but if a client requires an armed guard, the agencies should be permitted to equip some of their workforce with something more than single-shot pistols and shotguns,” he stressed. “Today, even robbers use Kalashnikovs and private security personnel cannot compete with their sophisticated weapons.”

According to GunPolicy.org, hosted by the Sydney School of Public Health, Pakistani civilians hold a combined total of 18 million guns, accounting for both licenced and illicit weapons.

For the last two years, APSAA has been demanding that the interior ministry be given license to carry weapons that will enable them to protect vulnerable institutions like banks.

While the debate rages on, ordinary Karachi residents must navigate a city that is armed to the teeth, and place their hopes on a struggling police force.